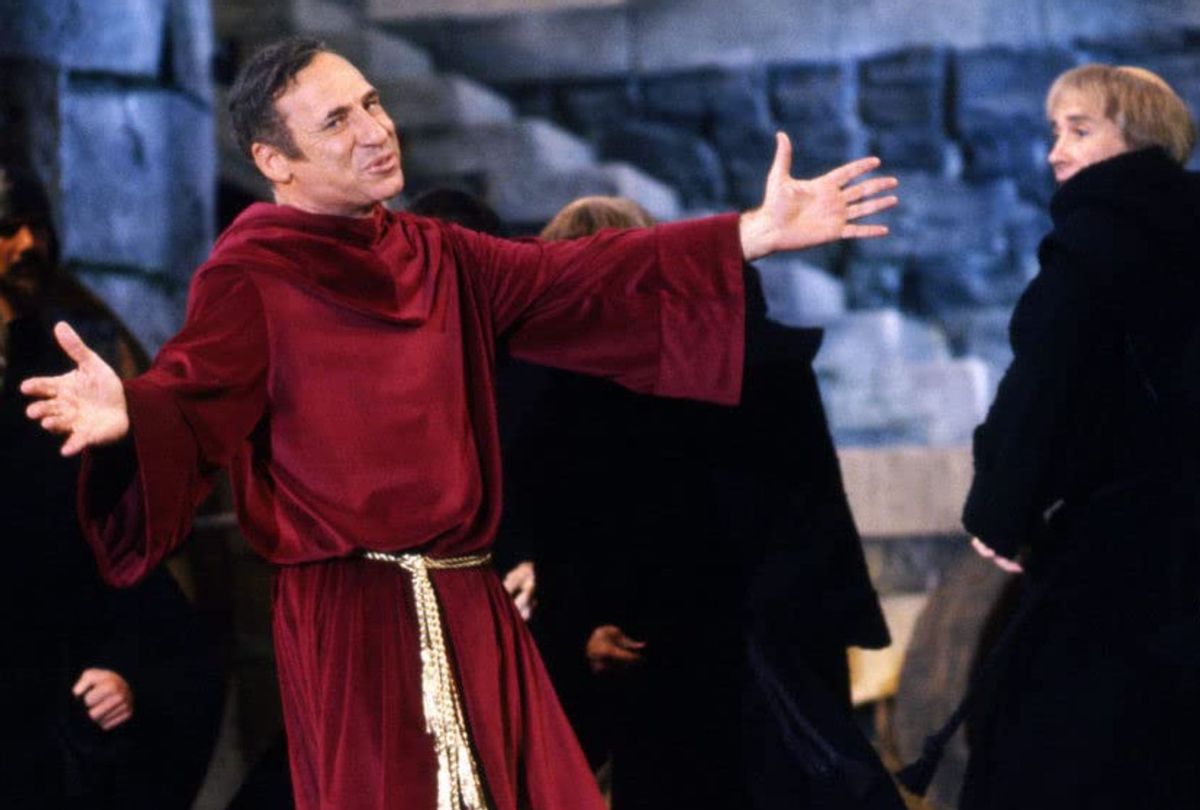 On June 12, 1981, Mel Brooks’s irreverent take on the course of human events opened in theaters. Though critics were thoroughly divided, “History of the World, Part I” grossed a respectable $31.6 million at the box office and left countless viewers hungry for a sequel (which is finally on the horizon). These 11 footnotes should get you ready for your next screening of this comedy classic.

1. Orson Welles breezed through his lines.

“History of the World, Part I” opens in a deceptively dramatic fashion. As we witness the very dawn of our species, a commanding voice declares “And the ape stood, and became man.” This unforgettable baritone belonged to Orson Welles. Brooks hired him to narrate the five major segments that make up the film.

Beforehand, it was agreed that the cinema legend would receive $5,000 per day in exchange for his services. Figuring that he’d have to spend five eight-hour days recording and re-recording these lines with Welles, Brooks paid him $25,000 up front. But by noon on the first day, Welles had recorded every single one of his lines to perfection. “Oh my god, I could have paid you $5,000,” Brooks lamented. After kicking himself for a few minutes, the funnyman asked Welles how he planned to spend the bounty. “Cuban cigars and sevruga caviar,” the “Citizen Kane” director replied.

2. The lead caveman was played by Mel Brooks’s former boss.

In 1949, the late, great Sid Caesar hired Brooks as a joke writer for “The Admiral Broadway Revue,” a short-lived NBC variety show. After the series ended, Brooks joined the staff of Caesar’s next program, “Your Show of Shows.” Working for a living legend was something the younger man would never forget. Even today, when Brooks is asked about his mentor, he often says: “No Sid Caesar, no Mel Brooks.”

Twenty-two years after “Your Show of Shows” ended its run, Brooks expressed his gratitude to Caesar by giving him a major role in 1976’s Silent Movie. Brooks would cast the comic again in “History of the World,” this time as Chief Caveman, who has a zeal for music (and slapstick).

3. According to Brooks, the Moses scene was a last-minute addition.

“Sometimes, you will get very lucky and the set will give you ideas for jokes,” Brooks said in a 2012 interview with the Directors Guild of America. One day, he was gazing out at the scenery that had been built for the caveman segments in “History of the World” when the gears in his head started turning. “I immediately thought, ‘Well, where do I go from here?'” Brooks recalled. Heading into the shoot, his plan was to “skip the Bible and go to Rome.” But eventually, he realized that the Stone Age set might enable him to explore another chapter in world history. With a few minor alterations, Brooks converted his faux caves into a mountaintop, and the Moses bit was born.

Josephus is a principal character in the film’s Roman Empire segment. Richard Pryor seemed perfect for the part and, to Brooks’s delight, he accepted the role. Unfortunately, though, a terrible accident kept Pryor out of the movie. On June 9, 1980, less than a month after History of the World began production, the comic lit himself on fire while freebasing cocaine and had to be hospitalized. At the suggestion of Madeline Kahn (who played Empress Nympho), Brooks handed the role to tap dancer Gregory Hines.

5. To play Comicus, the “stand-up philosopher,” Brooks took some cues from Eddie Cantor.

Eddie Cantor was one of Brooks’s personal heroes. An actor, singer, comedian, and radio personality, Cantor’s talents were almost limitless. When Brooks cast himself as Comicus in “History of the World,” he proceeded to copy some of his idol’s manic facial expressions. “I made my eyes pop out in reactions, like he did,” Brooks said. “My Comicus was a tribute to Eddie Cantor. He was my timing, my excitement.” Even the character’s wardrobe, a “short little toga,” was modeled after the outfit Cantor wore in “Roman Scandals,” a 1933 musical comedy.

6. Brooks felt it was important to laugh at the Spanish Inquisition.

Brooks is no stranger to writing risqué material that pokes fun at real-world atrocities. He famously based “​​​​​​​The Producers“​​​​​​​ on a fictional musical about Adolf Hitler, and in “History of the World,” he put together an entire song-and-dance routine about the Spanish Inquisition. While he later admitted that the song earned him “a lot of write-ins from rabbis,” Brooks felt it was important to turn these historical tragedies into jokes. “Comedy brings religious persecutors, dictators and tyrants to their knees faster than any other medium,” he explained.

Ronny Graham and Brooks first crossed paths as castmates in the hit Broadway revue “New Faces of 1952,” for which they co-wrote several skits. “[We] became fast friends,” Brooks said. Once Brooks decided that History of the World needed a Busby Berkeley-style musical number about medieval torture, he immediately reached out to Graham, who happened to be a successful musician.

“Together we began a fierce collaboration on a song called ‘The Inquisition,” Brooks recalled. The rest is, well, history. In the final film, Brooks takes center stage during this segment, hamming it up as the grand inquisitor Torquemada. Meanwhile, Graham makes a cameo as one of the Jewish prisoners.

Little is known about this segment. In an interview with film critic Gene Siskel, Brooks revealed that he had filmed a brief scene that made light of the notorious Three Mile Island incident. “I had a father and a mother made up to look like half a dog and half a cat as a result of a nuclear meltdown,” Brooks told Siskel. When test audiences reacted poorly, this bit was removed. However, at least one journalist managed to see an extended cut that contained the footage. In his (lukewarm) review of “History of the World” for The Washington Post, critic Gary Arnold wrote, “there’s a routine about Three Mile Island that’s almost awesome in its lack of comic point.”

9. King Louis’s scenes were filmed at an English palace.

It’s good to be the king, but language barriers aren’t much fun. Feeling that it would be easier to shoot the French Revolution chapter in English-speaking countries, Brooks chose Blenheim Palace in Woodstock, Oxfordshire, England — about 65 minutes northwest of London — as a stand-in for Versailles. Built in the early 18th century, Blenheim is where the Duke of Marlborough has historically resided. An architectural beauty, the palace has also made appearances in such films as “The Libertine” (2004) and “Mission Impossible: Rogue Nation” (2015) [PDF].

10. “History of the World” came with a steep price tag — at least for a Mel Brooks project.

Brooks himself claimed that “History of the World’s” budget — an estimated $11 million — exceeded that of his previous three films combined. Particularly expensive was the Inquisition scene, in which the set alone cost $1 million. By comparison, the entire budget of 1968’s “The Producers” was a paltry $941,000.

With a title like “History of the World, Part I,” you’d assume that a “Part II” would be hot on its heels. But Brooks stated several times in years past that he never intended to make a sequel. On June 7, 1981 — just four days before the movie opened in theaters — the director weighed in on this subject in The New York Times. “Will there be a ‘History of the World, Part 2’?” he asked, rhetorically. “No. Maybe a ‘Part 4,’ never a ‘Part 2’.”

That changed some 40 years later when it was announced in 2021 that a “History of the World, Part II” series was being put into production at Hulu. Brooks will serve as one of the series’s writers and executive producers, along with Nick Kroll, Wanda Sykes, and others. “I can’t wait to once more tell the real truth about all the phony baloney stories the world has been conned into believing are History!” Brooks said about the project.

This article was originally published in 2016; it has been updated for 2022.