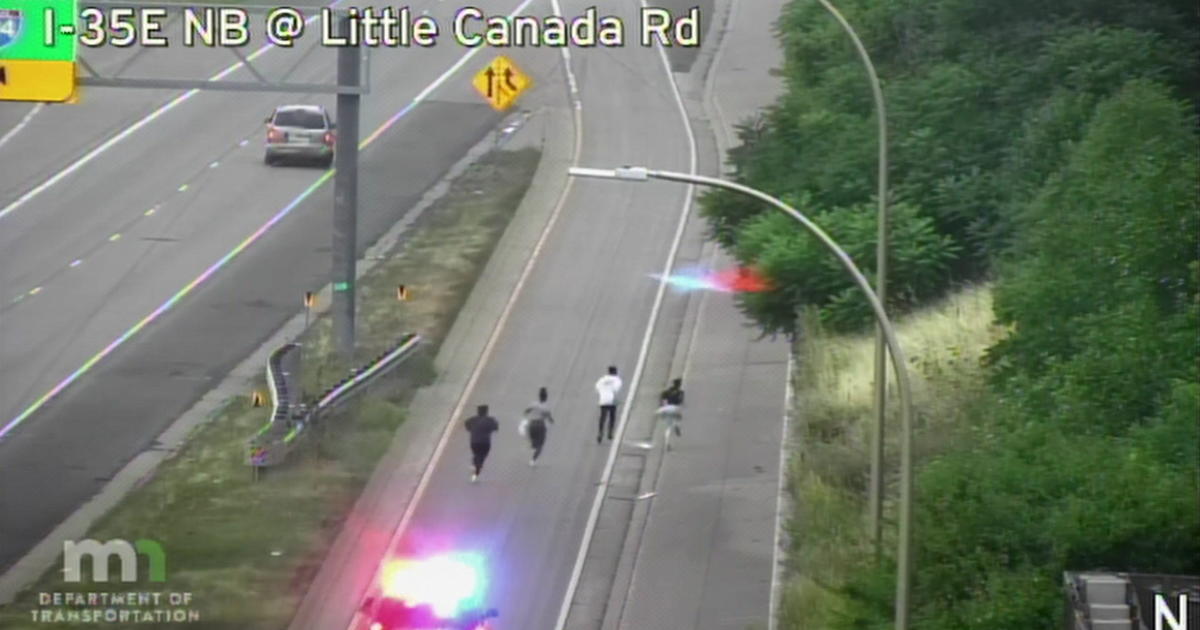 RAMSEY COUNTY, Minn. — Stolen vehicles and police pursuits led to the arrest of 11 teenagers across the Twin Cities metro this weekend. Their ages range from 12 to 17.

Four teenagers were arrested after a police chase ended in a crash on northbound Interstate 35E near Little Canada Road late Saturday afternoon.

St. Paul police say they spotted a Kia they believed to be a stolen rental car. They had been tracking the vehicle using GPS from the rental company.

Officers requested help from the Minnesota State Patrol, which dispatched a helicopter in response. Stop sticks were attempted on the allegedly stolen car, which then swerved and hit the median. Police say the suspects then jumped out of the vehicle and ran on foot from officers.

Police quickly arrested the fleeing suspects — 14-year-old boy and three girls ages ranging 15-17. Two of the girls were taken to the hospital with minor injuries.

“To be out on 35E running through traffic is very much not safe, or anything we would want them to be doing,” St. Paul Police Sgt. David McCabe said Monday.

Sgt. McCabe said stolen cars, specifically Kias and Hyundais, are a concerning trend in the city. When it’s juvenile offenders, the information authorities can release to the public is limited and their outcomes are complex.

“It’s very specific to the situation that the juvenile is arrested for,” he said. “A lot of factors are taken into consideration when deciding, you know, what to do with a juvenile in the juvenile justice system here in Ramsey County.”

In Washington County, charges for seven teenagers were announced Monday in connection to a disturbance and pursuit of a stolen vehicle on Saturday in Lake Elmo.

The Washington County Attorney’s Office said the seven boys, aged 12-15, face a variety of felony and misdemeanor charges. Due to the danger to the public during the incident, the attorney’s office recommends the five remaining detained juveniles remain in custody until court proceedings.

Authorities say around 1:37 p.m. Saturday, police were called to Cabela’s at 8400 Hudson Road in Woodbury after employees reported several teens who had been told to leave the store for causing a disturbance returned.

Officers say the teens were associated with a stolen vehicle and were attempting to steal from the store.

The suspects allegedly fled after they spotted a Woodbury patrol car. They headed north into Lake Elmo on County Road 13. Residents in the area were notified of the situation and began to call in sightings of the suspects, eventually leading to their arrests.

In 2019, two juvenile detention centers were closed in Ramsey and Hennepin counties. Some pointed to the closures as a reason for a spike youth crime, while others argued they were never a solution for real change.

He hopes the recklessness of this weekend doesn’t become the norm.

“I hope they realize the seriousness of, you know, what they’re encountering and what they’re doing. I hope they learn from it, grow from it,” McCabe said. “We need to move on from this trend, because, again, it’s dangerous and it’s something that needs to stop.”

All of the teens in the 35E chase face various charges including auto theft, fleeing police and possession of stolen property.

Kirsten Mitchell joined the WCCO team as a reporter in November of 2021. A Saint Paul native, Kirsten is proud to tell stories in her home state. She graduated from the University of Minnesota-Twin Cities (Go Gophs!) and interned at WCCO during her time there.