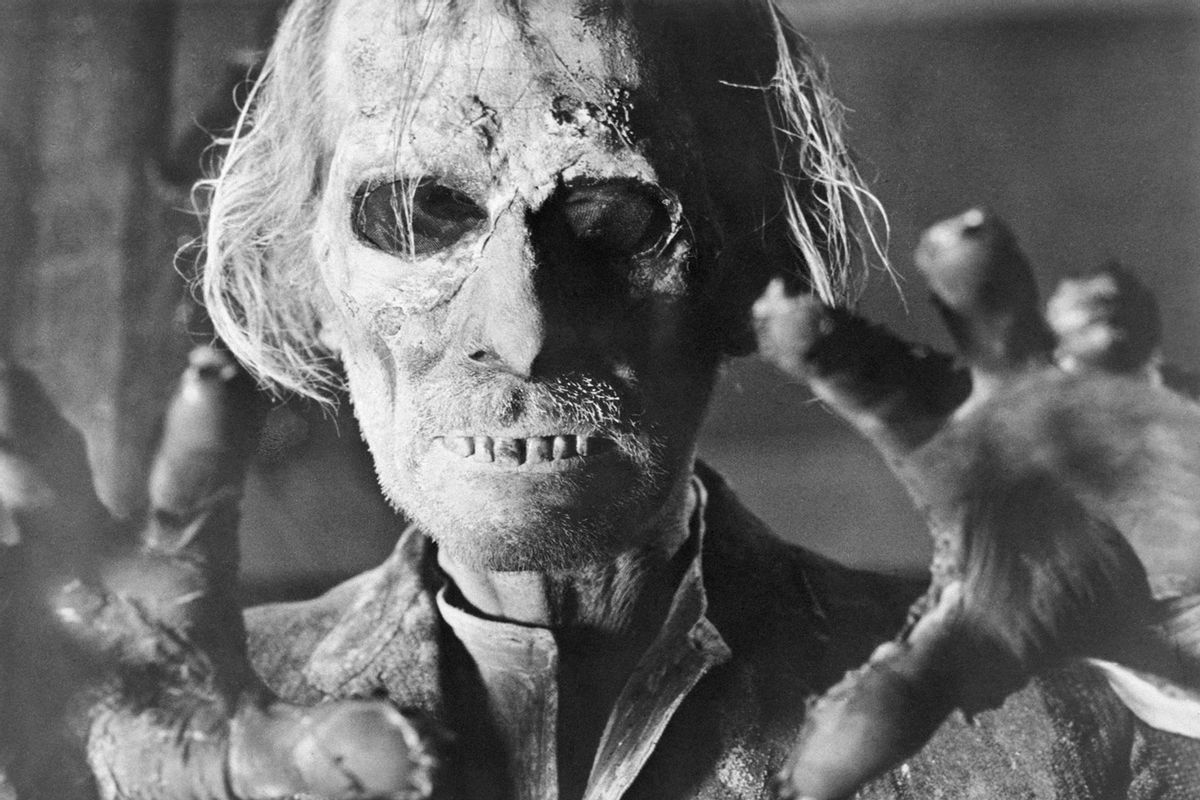 Yanked from the tasteless, imaginative, and classic E.C. comics that incited a Congressional investigation in the 1950s, HBO’s “Tales from the Crypt” — which premiered on June 10, 1989 — was one of the few television shows where A-list Hollywood talent regularly appeared both in front of and behind the camera. Robert Zemeckis (“Back to the Future“) was an executive producer, along with Richard Donner (“Superman: The Movie“) and Walter Hill (“The Warriors“). Each week, the anthology series would deal out a bloody morality tale, framed by the cackling Crypt Keeper (voiced by John Kassir). Boils and ghouls curious about the show’s history should keep reading, or more puns will follow.

1. “Lethal Weapon” is partly responsible for “Tales from the Crypt.”

Producer Joel Silver was on the set of 1987’s “Lethal Weapon” when he and director Richard Donner began talking about Silver’s failed attempts to adapt “Tales from the Crypt” as a feature film: the disappointing reception to 1983’s “Twilight Zone: The Movie” and 1982’s “Creepshow” had lessened enthusiasm for horror anthologies. Unmoved by those failures, Donner said he’d be interested in joining the project. When the series idea was brought to HBO, they were intrigued that so many feature film talents were backing the idea. When Zemeckis — who was working with Silver on 1988’s “Who Framed Roger Rabbit “at the time — got involved, the network agreed to move forward with the show.

2. The Crypt Keeper has Chucky’s eyes.

When a film or television show needed a creepy animatronic puppet, they usually called Kevin Yagher. As the horror world’s Jim Henson, the prolific special effects expert has been responsible for the Crypt Keeper, Chucky of the “Child’s Play” films, and various versions of Freddy Krueger‘s make-up. To create “Tales from the Crypt”‘s decomposing host, Yagher used the clear blue eyes from his Chucky fabrication; it took six puppeteers to make him fully operational.

3. Arnold Schwarzenegger directed an episode of the series.

“Tales from the Crypt” was famous for luring a number of noted feature directors to television at a time when it was considered a step down from movies. While having producers like Donner and Zemeckis making phone calls helped, the primary attraction was getting to shoot what amounted to a short film with minimal interference. For actors, it was also a chance to step behind the camera without the burden of an extended shoot. Arnold Schwarzenegger, who was paid scale ($15,000) to direct an episode, said at the time “It was, I would say, the greatest joy I’ve ever had in the movie business.”

4. The series brought Humphrey Bogart back from the dead.

Zemeckis’s involvement often meant that “Tales from the Crypt” would take any opportunity to explore new techniques for visual effects. In the episode “You, Murderer,” a career criminal murdered by his wife and best friend posthumously narrates the events leading up to his demise. When the character looks in the mirror — the show takes place from his POV — viewers see the resurrected features of Humphrey Bogart. Zemeckis used footage from “Casablanca“, “The Maltese Falcon,” and other Bogart films to capture footage and digitally insert it into the frame. During wraparounds, the Crypt Keeper also converses with a seemingly above-ground Alfred Hitchcock.

Because it was free from the restrictions of broadcast networks, HBO had no problem pushing boundaries with its content. When the channel enlisted a new ad agency to develop a marketing campaign for “Tales from the Crypt”, they screened a collection of racy footage from the show along with other original programming. When the lights came up, someone said, “It’s not TV.” Another person said, “No, it’s HBO.”

6. Two versions of each episode of the show were shot.

For Zemeckis, Donner, and the rest of the show’s high-profile producers, “Tales from the Crypt’s” financial payoff was always thought to be a move to syndication. Because HBO was more permissive in terms of content, they needed to prepare for an eventual screening on broadcast TV stations. When “Tales from the Crypt” was bought by Fox for a late-night Saturday slot in 1994, the episodes were re-edited to include alternate takes that eliminated most of the original episodes’ gore and nudity. The show also had actors record PG-rated versions of otherwise profane dialogue during shooting. While HBO normally values exclusivity, it didn’t mind the deal: Uncut episodes were still an attraction and, as one executive pointed out, “The show is called ‘HBO’s Tales From the Crypt’.” Free advertising never hurt.

7. “Tales From the Crypt’s” axe-wielding Santa had been seen before.

One of the show’s earliest episodes featured Larry Drake (“L.A. Law“) as a murderous Santa Claus stalking a woman who had just murdered her husband and couldn’t exactly plead with the police for assistance. While the premise was based on an E.C. story, it wasn’t the first time it had been filmed. In 1972, a production company named Amicus released a “Tales From the Crypt” feature: in one segment, Joan Collins appears as the freshly widowed wife being hunted by a significantly less sinister-looking Santa.

As an anthology show, “Tales from the Crypt” didn’t have any recurring cast members to help drum up publicity. The only familiar face (and voice) was Kassir’s. So HBO had him make the media rounds at the start of each season, calling into radio shows as the Crypt Keeper. “We would launch a new season and I would spend a week in the morning doing 50 or 60 radio interviews as the Crypt Keeper,” he told CrypticRock.com. “I would naturally have to improvise all of that. I would have some bullet points and all that to talk about when the show was coming on . . . [the Crypt Keeper] would sit there and talk. ‘How are you, Frank? Ha ha ha.'”

9. The series moved to the UK for its final season.

After six seasons, “Tales from the Crypt” had more or less exhausted California’s reserve of actors and filmmakers. For its final season, the production moved to Ealing Studios in West London. Producer Gil Adler endorsed the switch for enabling new faces and locations to be utilized. As a result of the change, Ewan McGregor and Bob Hoskins were among the actors who popped up on the series.

10. It got G-rated for an animated series.

The success of “Tales from the Crypt” in live-action prompted Silver to consider alternative revenue streams for its popular host, who once sat in with “The Tonight Show” band. In 1993, ABC aired a Saturday morning cartoon show, “Tales From the Cryptkeeper,” that featured a somewhat softer approach to the morbid material: characters didn’t die, and being dismembered was off-limits. While the original intention was that episodes would be introduced by the puppet version of The Crypt Keeper, concerns over his appearance — he is essentially a rotting corpse, which might disturb children — led producers to replace him with an animated substitute. John Kassir still provided the voice. The light alternative didn’t resonate with viewers, who tuned out after two seasons.

The unwieldy title was probably a fair warning: “Secrets of the Crypt Keeper’s Haunted House” was a 1996 production that featured Kassir and his puppet alter ego in a game show that aired on CBS on Saturday mornings. Shot at Universal Studios Florida, teams of contestants awkwardly interacted with a green screen and 1990s-era computer graphics while the Crypt Keeper taunted them. The effects were so peculiar that the show’s premiere was delayed by a month while technical difficulties were sorted out. It lasted one season, but that was enough to make some kind of TV history: by this point, the character had appeared on ABC, CBS, Fox, and HBO.

12. There was also a Christmas album.

Reminded that Freddy Krueger once performed with the Fat Boys, Kassir recorded several albums in character for Warner Bros. The first, “Have Yourself a Scary Little Christmas”, was released in 1994, with memorable song titles like “Deck the Halls with Parts of Charlie” and “‘Twas the Fright Before Christmas.”

This article was originally published in 2019; it has been updated for 2022.