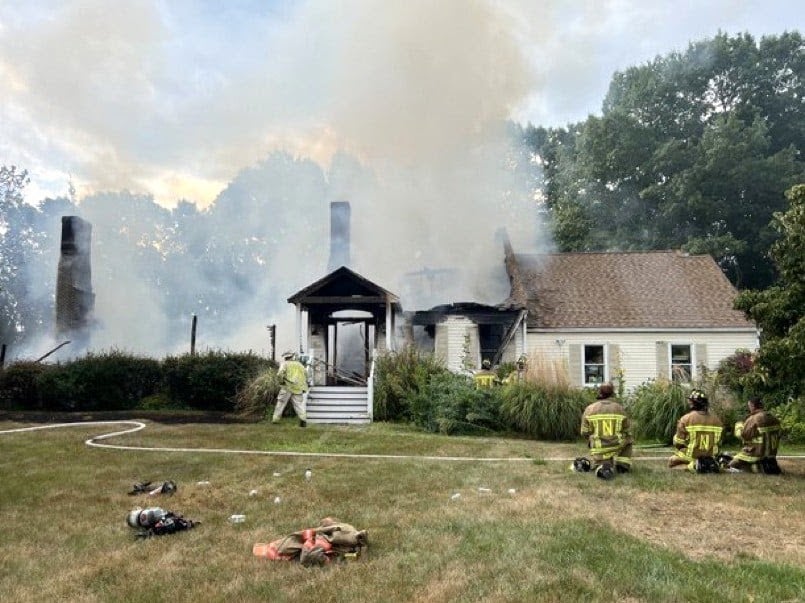 The Merrimac Fire Department said in a news release that they received a 911 call reporting the fire at approximately 2:15 p.m.

The first firefighters to arrive attempted to attack the fire, but were met by extremely heavy flames and were pushed back, the department said. A second and third alarm were soon struck to request additional firefighters and equipment.

Early on, the department said, heavy flames from the home caught nearby brush and wood, spreading rapidly and posing a significant threat to the surrounding area.

If not for the quick response of Merrimac firefighters, mutual aid departments, and others, it said, the flames could have caused a widespread blackout in the area and additional property damage.

Three firefighters were taken to nearby hospitals as a result of the fire, the department said. One was treated for a heart-related medical emergency, and the two others were treated for injuries they suffered while fighting the fire.

The home is expected to be a total loss, the department said.

Crews are expected to remain on scene throughout the day and overnight for overhauling and as part of the initial fire investigation. The origin of the fire will be investigated by the Merrimac Fire Department and Massachusetts State Fire Marshal’s Office.