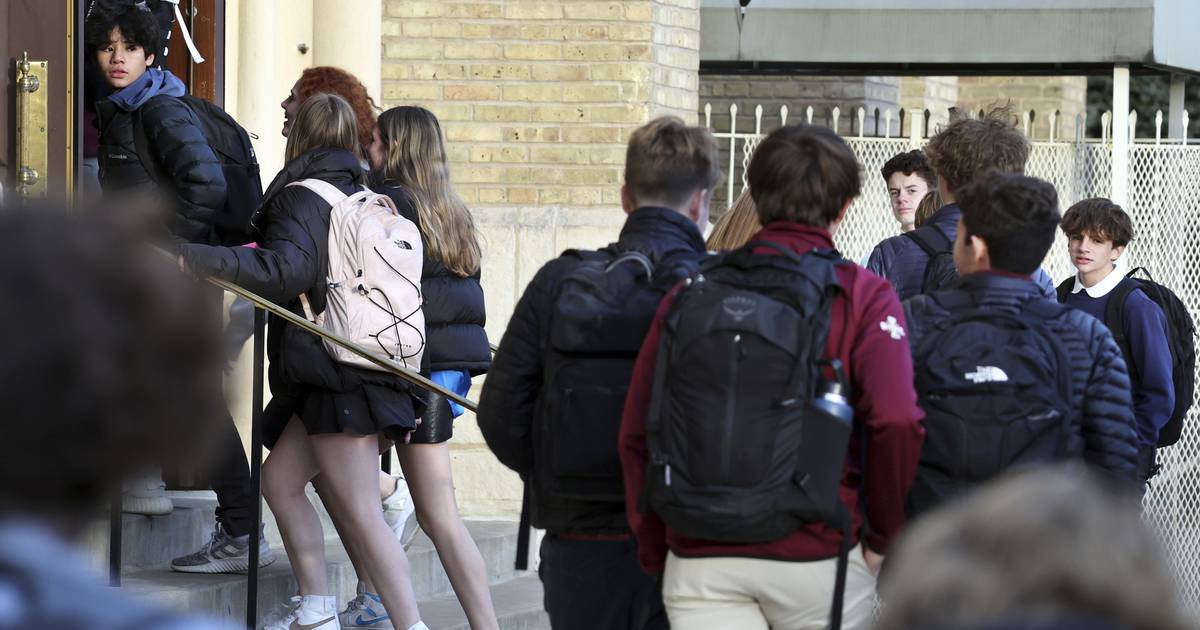 Charlie Reif, a junior on the varsity hockey team, is the older brother of a freshman on the JV team who was involved in the crash. His brother came home Sunday from Indiana with his dad, while Reif was doing homework.

“Then I heard that back door open,“ Reif said. “It was pretty nice to see him again.”

Players across the hockey program gathered Sunday to spend time together, Montgomery said, and the predominant feelings were shock and sadness for their teammates still in the hospital. As the players have called each other over the last few days, they’ve ended conversations with “I love you,” he said.

Jack Rhyner, a senior on the varsity team, said Sunday night was emotional, but also marked “the beginning of our healing.”

“It was really great, just seeing all the kids that could be there, all smiling and having a good time, getting to bond with them after this experience,” he said.

St. Ignatius held a 3:30 p.m. prayer Mass for the hockey players at the Church of the Holy Family on Monday. The Mass brought together families and community members to support the students in a private space. At the request of some of the players’ families, reporters did not attend. The Mass was livestreamed to the players and families who remain in the hospital by a member of the team community who usually records games, Montgomery said.

School counselors who are trained in grief counseling are also on hand at school, she added.

“I think one of the really special things about our community right now is our ability to open up our arms to give a lot of care and support,” athletic director Mike Hurley said at the news conference.

Jack Perreault, a senior on the varsity, said the players haven’t been able to talk directly with the students still in the hospital, but they’ve sent messages to the parents to share thoughts and prayers for them.

Neither of the two coaches on board the bus have major injuries, Montgomery said. Both coaches were “unbelievable” with the kids, he added.

“Their care level, their composure and their communication during this event were top-notch,” he said.

St. Ignatius is about one third of the way through its season, and the junior varsity’s games have been canceled for the foreseeable future after losing 1-0 against Culver Academies on Saturday. The team had been set to play Culver again Sunday morning.

The players at St. Ignatius received letters from every player on the Culver team, Montgomery said. Players at Culver also helped pack the St. Ignatius players’ bags so they could get their equipment back.

The resumption of games in the JV team’s season depend on the comfort of the players and their families, Hurley said.

“We will walk with them until they’re ready to return,” he said.

The varsity team plays its next game Thursday against Mount Carmel and its next home game Saturday.

The school has experienced an outpouring of support from the public on social media, including a tweet from the Chicago Blackhawks, and through emails to the school.

“To anyone that has sent their positive wishes, their thoughts, their prayers, we’d just like to say thank you, they’re really well received,” Hurley said.

The Wolfpack junior varsity players were in Indiana for a weekend tournament in Culver, Indiana, police said. After having dinner in Warsaw, the 23 students, two coaches and driver headed to the team’s hotel. Authorities said the truck driver ran a red light on U.S. Route 30 and collided with the right rear of the bus, police said.

The impact of the crash flipped the bus onto its side, tossing one student from the bus, according to Warsaw police. The injured team members were treated at the scene before they were rushed to area hospitals.

Police said the truck driver, Victor Santos, 58, of Brooklyn, New York, was charged with operating a vehicle while intoxicated, causing bodily injury, a Level 5 felony. Police said Santos failed a sobriety test and refused to consent to a chemical test before police were granted a search warrant, which allowed hospital staff to draw blood for testing.

Just prior to the crash, police said they received reports that a truck was swerving into other lanes, speeding and driving off the road on U.S. 30 entering Warsaw city limits, according to police.

The truck driver was operating the semitrailer out of New Jersey.