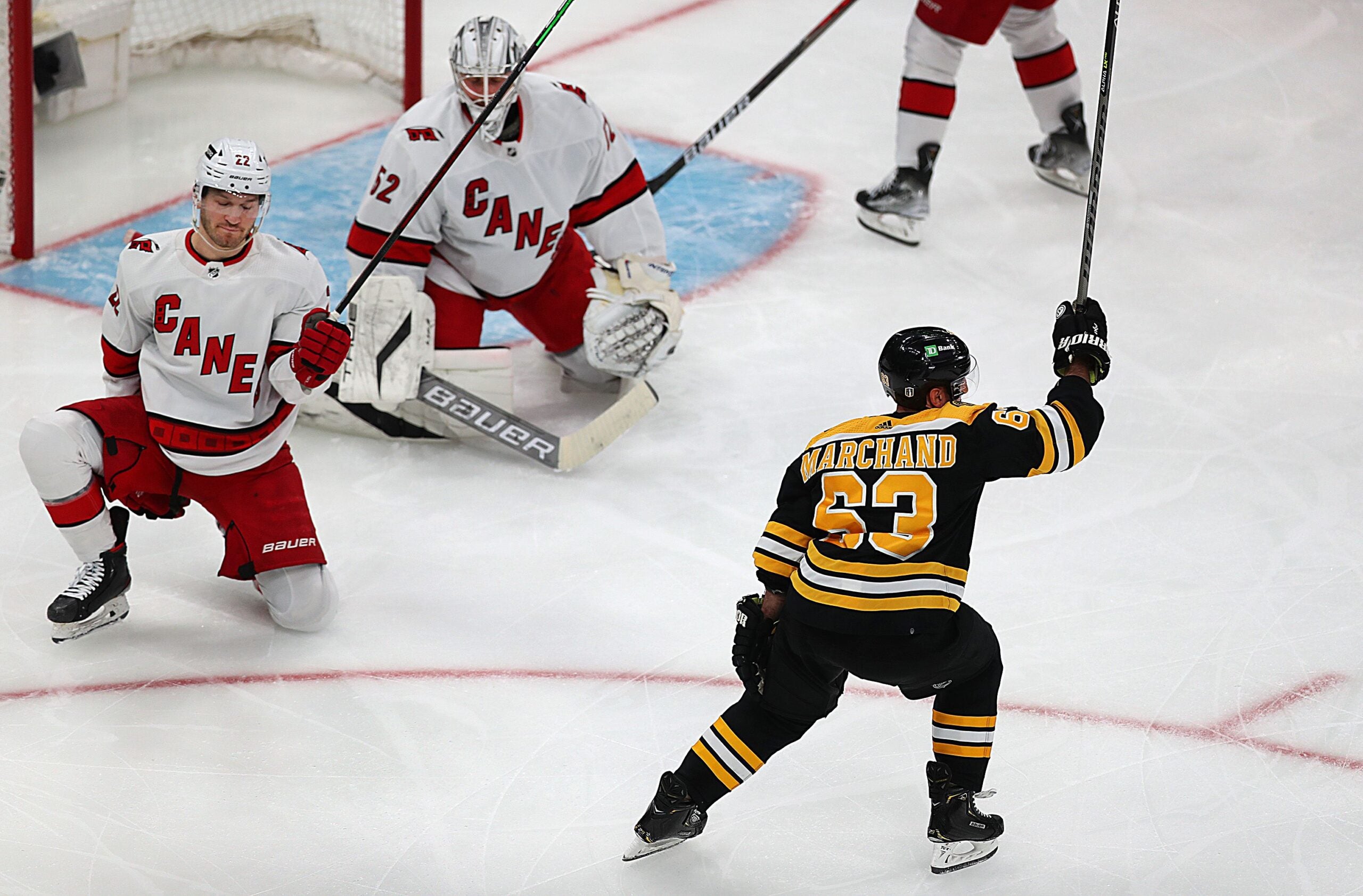 The Boston Bruins downed the Carolina Hurricanes, 4-2, in Game 3 of their first-round playoff matchup behind strong outings from Brad Marchand, David Pastrnak, and Jeremy Swayman.

The win puts the series at 2-1 in favor of the Hurricanes.

Marchand finished with three points to lead all skaters, while Pastrnak (goal, assist) and Swayman (25 saves in first career playoff start) each helped cut the series deficit in half.

Charlie Coyle and Taylor Hall also registered goals in the B’s first win against the Hurricanes all season.

With a rabid crowd behind them, the Bruins received a needed equalizer late in the opening frame when Charlie Coyle notched a shorthanded marker off a slick saucer pass from Jake DeBrusk.

“When [DeBrusk] and [Coyle] made that play shorthanded to get us back in the game, it just changed our whole demeanor,” Marchand said. “We’ve kind of been playing catch-up all series, and it felt good to know that we can come back in those situations, and we can respond the way we have in the past.”

The B’s got their first lead of the entire series on Marchand’s early second-period goal. Patrice Bergeron sent the puck toward the net and it found the stick of No. 63, who ripped it in to put Boston ahead 2-1.

David Pastrnak gave the Bruins some insurance with a power-play tally at 14:53 of the second. The B’s got a lengthy 5-on-3 chance but didn’t convert until the Canes got a man back.

Taylor Hall added another power-play marker off a Pastrnak feed to extend Boston’s lead to 4-1 4:08 into the third.

The Canes pushed back off a point shot from Jaccob Slavin with 8:30 remaining, but the Bruins stymied Carolina in the closing moments to earn their first win of the series.

Heading into Game 3, the Bruins had scored just four goals in five games against the Canes all season.

During Game 3, Boston put a four-spot on the board behind two power-play goals, a shorty, and an even-strength tally.

“We stayed focused on our game plan, and through 60 minutes, I think we played a pretty good game,” Pastrnak said.

Marchand’s go-ahead goal, in particular, counted as the first time the Bruins had a lead against Carolina all season. It was a long time coming for the B’s and they gained some confidence in a series that had favored the Canes heavily through the first two games.

Breakout games from Boston’s top players had a big role in the win, maybe non more important than Marchand.

“I felt engaged,” Marchand said after notching his first three-point night since April 2. “It’s kind of been a while since I felt that. I think the importance of the situation that we were in hit us all. The guys just seemed like they were prepared when they got to the rink tonight.”

The Bruins went to their other option in goal following two losses from Linus Ullmark, and the rookie looked like his usual self.

“That’s a great team effort,” Swayman said. “It was important because it came in a rush, and that’s their game. They get in front of the net and clear rebounds.”

The Hurricanes went scoreless on the man-advantage in five opportunities and Swayman didn’t allow much during any power-play chance.

Swayman’s busiest period came in the opening frame when he stopped 10 of 11 Carolina shots on net. He received help from his defensemen all night with Derek Forbort leading the way with nine blocked shots.

The Anchorage, Alaska native notched 16 saves over the final two periods to pick up his first postseason “W.”

There will be a Game 5

The Bruins extended the series with Friday night’s win, guaranteeing at least five games in this series.

That thought appeared to be a bit optimistic after the first two showdowns. But all of a sudden, the Bruins have some life.

“Obviously, they had the edge on us during the regular season, but the playoffs is a whole different animal,” Pastrnak said. “It’s two great hockey teams facing each other in the playoffs.”