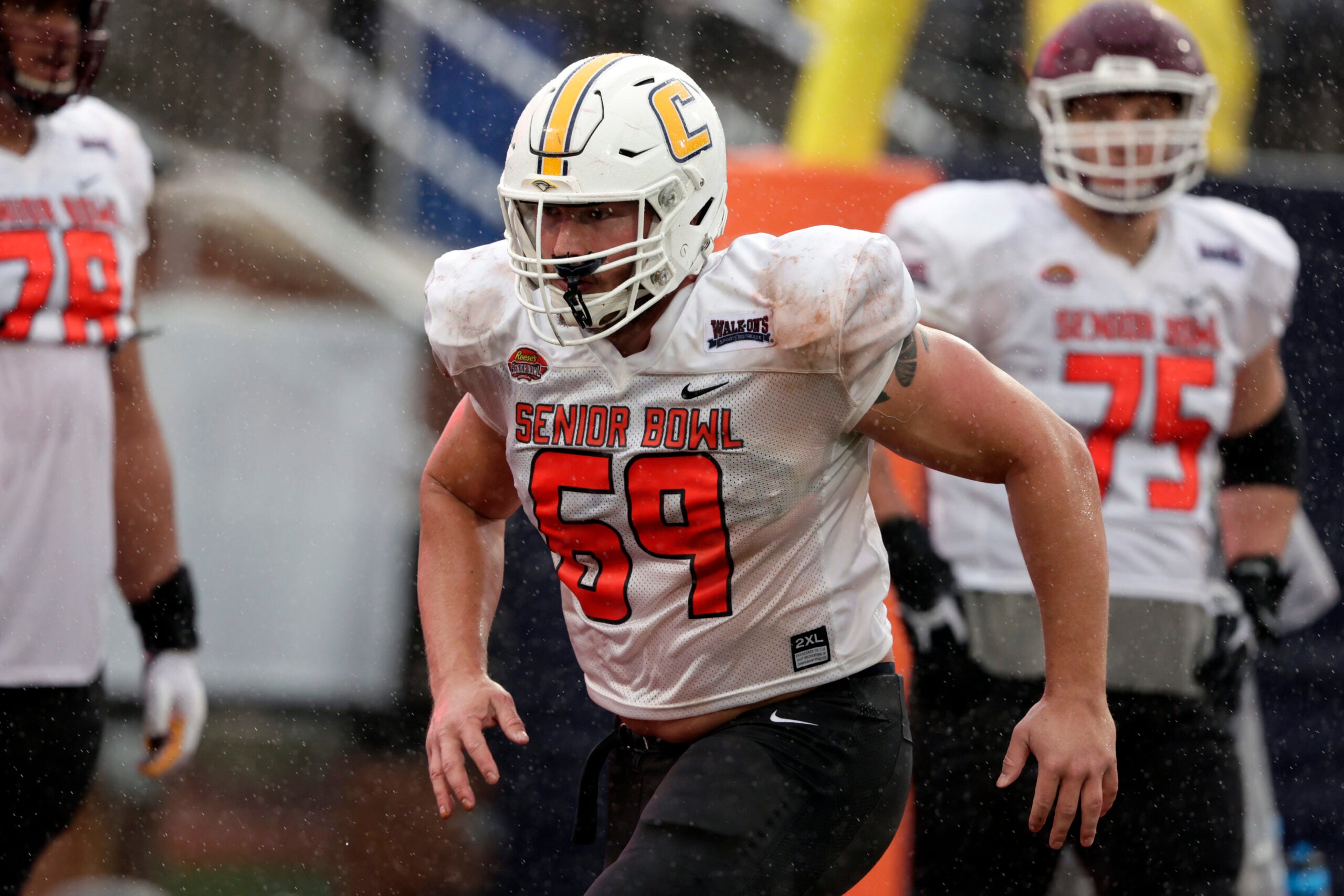 After trading down from the No. 21 pick in the 2022 NFL Draft, the Patriots finally made their first pick at No. 29 overall. Their selection might end up being one of the most head-scratching of the entire first round.

New England selected Tennesse-Chattanooga offensive lineman Cole Strange at No. 29, passing over cornerback Andrew Booth Jr. and a number of players that fell late into the first round.

“Cole fits well into our team and our system. We obviously think he’s a good player,” said Bill Belichick of his new pick early on Friday morning, noting that he didn’t believe Strange would’ve stayed on the board much longer if New England passed on him.

Though we don’t know what the Patriots’ or other teams’ grades on players are at the moment, the consensus about Strange as a second or even third-round pick heading into Thursday night makes that hard to believe.

But there’s certainly more behind the Patriots’ calculations than simply grabbing a player just to fill a need — something Belichick said he doesn’t subscribe to.

Here are a few thoughts about the “Strangest” pick of the NFL Draft’s first round.

Patriots go with need over value.

First, let’s talk about the pick itself and what it says about where the Patriots are as a team.

On one hand, drafting Strange ostensibly fills New England’s dire need at offensive guard; he seems a good bet to beat out most veterans currently on the roster for whichever guard spot Michael Onwenu isn’t playing.

But it’s fair to note that the Patriots didn’t have to need an offensive guard in the draft at all. Mason had two years, not one, left on his deal when the team traded him to the Tampa Bay Buccaneers, and they weren’t willing to pay a few extra million to keep Ted Karras in town. If they had kept either player, New England probably goes a different direction here.

Trading Mason for a fifth-round pick only to then turn around and draft a guard, especially Strange, with their first overall pick in the draft feels like a misallocation of resources, even with the cap space saved by moving on from Mason.

The other piece of this: the absence of the legendary Dane Scarnecchia and his descendants Carmen Bricillo (now with the Las Vegas Raiders) and Cole Popovich (left the team in 2021) might have forced the Patriots’ hand as well.

After years of routinely turning middle-round picks into capable starters, New England may have decided they had to go with a blue-chip, plug-and-play starter to protect young quarterback Mac Jones — who isn’t quite at Tom Brady’s level of pocket savvy yet — rather than trusting their usual developmental process.

Whatever the reason, Belichick left players who generally had higher all-around grades on them than Strange, like Clemson cornerback Andrew Booth Jr. and Michigan safety Daxton Hill, on the board to make this pick. He’s probably going to face a lot of questions about that over the next few years.

Wild draft board goes against Pats.

Of course, taking Strange almost certainly wasn’t “Plan A” for the Patriots. Belichick hinted that the Patriots might have taken Strange at No. 21 if they’d remained there, but we’ll never know that now.

Anyone who was clamoring for a first-round wide receiver was disappointed rather quickly as all four of the top pass-catchers in the class, including injured Alabama star Jameson Williams, were off the board by pick No. 12. But New England probably wasn’t going to be too concerned about that after getting DeVante Parker in a trade and bumping Nelson Agholor back to the slot where he belongs.

But the loss of Zion Johnson and Trevor Penning likely hurt a lot more.

After weeks of speculation about Johnson being a good fit for the Patriots and perhaps being the aforementioned blue-chip talent they’d take at guard, the Los Angeles Chargers stole the Boston College lineman at No. 17 overall.

Then, the athletic, nasty tackle Penning came off the board to the New Orleans Saints at No. 19 — two spots before the Patriots picked.

Knowing what the team just did with Strange, it feels extremely likely the Patriots would’ve taken either Johnson or Penning if either were available at No. 21.

Strange does have the athletic upside to approach the ceiling of those other players, but right now it feels like the Patriots ended up with the “best of the rest” at a spot they badly wanted to address with top talent.

Cornerback not a priority for Patriots?

In an interesting twist, New England apparently didn’t value the cornerback class as highly as some would’ve hoped.

Obviously, they’d have been interested in a player like Derek Stingley or Ahmad Gardner if they had miraculously fallen to No. 21. But that wasn’t going to happen. But the next cloud of cornerbacks, led by Trent McDuffie and Kaiir Elam, are solid players for the back end of the first round.

And yet, the Patriots chose to trade the No. 21 pick to the Kansas City Chiefs, who took McDuffie. The Buffalo Bills then took Elam with the No. 23 pick. Finally, sitting at No. 29 with Booth Jr., a corner that seems to be exactly the type of cornerback the Patriots would like, on the board, New England went with Strange.

Was it a simple matter of the need at cornerback not being as great as that at offensive line? Did they just not like these corners as much as everyone else?

Whatever the rationale, it feels unlikely the Patriots don’t add to their cornerback room soon with Malcolm Butler and Jalen Mills likely penciled in as their two starters on the outside. It just feels as if pick No. 29 would’ve been the time to do that.

Another Day 2 trade-up on the way?

If it makes Patriots fans feel any better, the team at least has more ammunition with which to bolster its other needs, including cornerback, on Days 2 and 3 of the draft.

By trading back with the Chiefs, the Patriots acquired the 94th pick (third round) to go with the two picks they already have in the second (54) and third round (85). They also got the 121st pick (fourth round) to use on Day 3, where they hold six other picks.

With that in mind, don’t be surprised if the Patriots package at least one of those late-round picks to make up a move up in the second or third round for starter-level talent.

With many intriguing receivers, cornerbacks and linebackers still on the board, there figures to be plenty of movement on Day 2, which might actually be the meatiest part of the draft.

Keep in mind: New England traded picks No. 46, 122, and 139 to grab Christian Barmore at No. 38 overall last season. A similar move is absolutely in the cards on Friday.