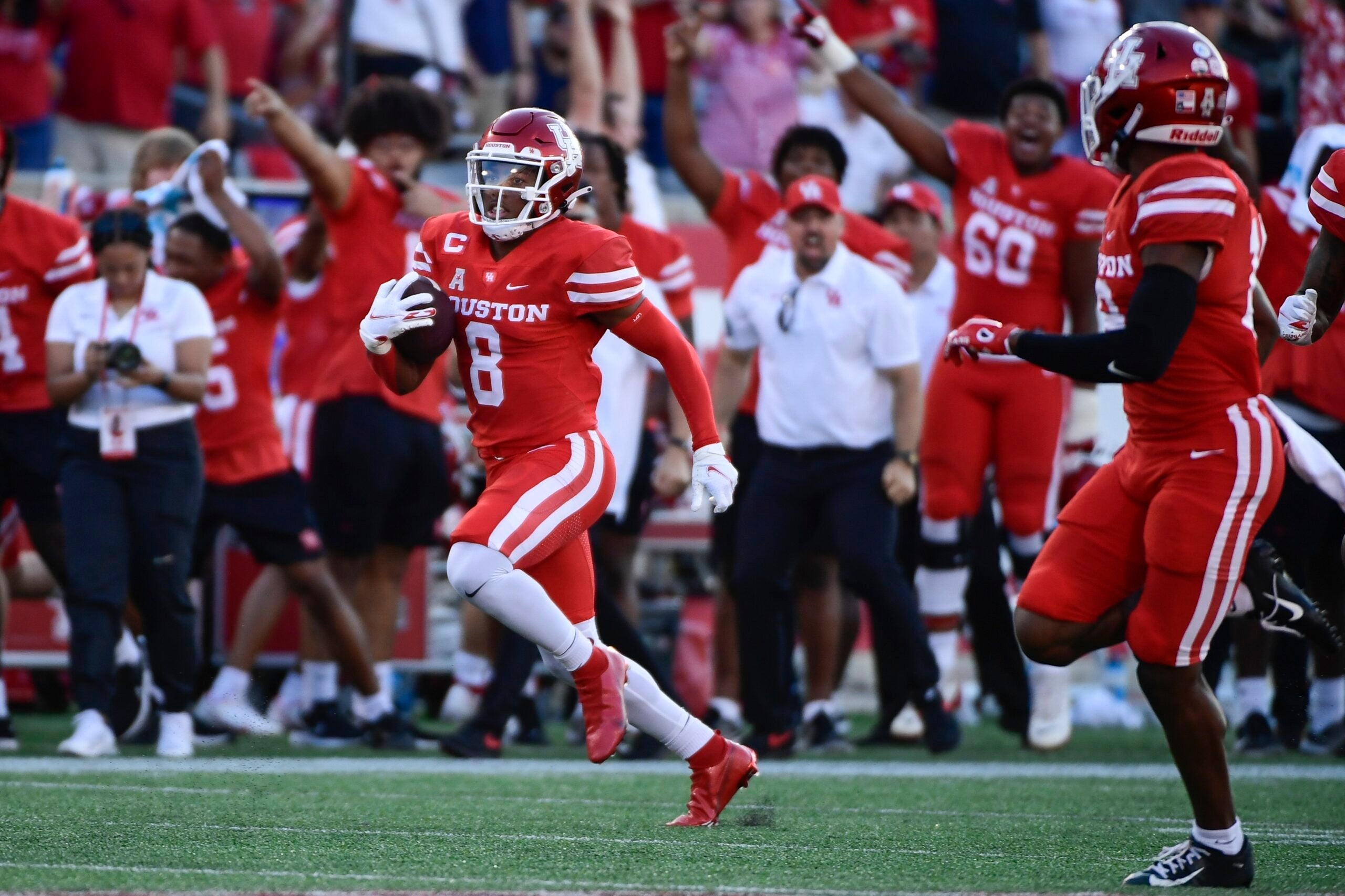 The Patriots doubled down on speed with their second pick of Day 2 in the 2022 NFL Draft. New England selected Houston cornerback Marcus Jones in the third round with the No. 85 overall pick.

Here are five things to know about the Patriots’ newest cornerback

He was a turnover machine as a senior.

Jones saved his best for last.

As a senior, Jones had five interceptions over 13 games and also had a forced fumble. Jones’s five picks led the American Athletic Conference in 2021 and were the third-most in the NCAA.

He was able to record nine interceptions over his four-year college career. He actually played at Troy for his first two years before transferring to Houston following the 2018 season. s

His skills as a football player go beyond cornerback.

Not only was Jones one of the best defensive ballhawks in the college game in 2021, but he was also arguably the best returner in the country. Jones’s four return touchdowns (two kickoff, two punt) led the NCAA in 2021. He was also fifth in yards per punt return (14.4) and third in yards per kick return (34) last season.

As Jones appears to be in line to replace Gunner Olszewski in the return game, he also brings some receiving talent to New England, too. He entered college as a receiver before quickly transitioning to cornerback. Jones got to show his receiver skills in 2021, catching 10 passes for 109 yards and a touchdown.

Jones’s all-around, prolific season helped him win the Paul Hornung Award in 2021, which is given to the most versatile college player.

He projects as a slot corner.

The Patriots’ biggest loss of the offseason came at the start of free agency when All-Pro corner J.C. Jackson signed a big-money deal with the Los Angeles Chargers.

But Jones likely won’t be a direct replacement for Jackson on the outside. With his 5-foot-8, 174-pound frame, several draft experts project Jones to be a slot corner. Jones didn’t participate at the combine or at his pro day due to a shoulder injury, so his exact speed isn’t known. But you do have to be pretty quick to set records as a returner, and that speed should help him as a nickel cornerback.

Jonathan Jones has been the Patriots’ starting slot corner for much of the last four seasons. Jones, who’s entering the final season of his three-year deal, suffered a season-ending shoulder season in Week 6 of the 2021 season, causing Myles Bryant to be the team’s starting nickel corner for the latter half of the season.

Jones is also in the music game, dropping his first studio album as a rapper/composer in September 2021 titled “Complications.” He even has a stage name, going by the name “Elliott.J”

While putting up monster numbers in college, Jones actually wrote, produced, and mixed all of his music alone. In an interview with KPRC 2 in Houston, Jones shared that Drake is his musical inspiration.

“He was one of those guys who basically set the wave for R&B music and put his little twist to it,” Jones told KPRC 2 of Drake. I love the production and the different genres of music he makes.”

Jones sees a lot of similarities between football and music.

“Hard work and dedication,” Jones said of what goes into both things. “Most rappers would end up just going to the studio and recording something and have a whole bunch of people doing their stuff, but I’m basically starting from a blank slate. I end up finding a sample, recording to it, and making a beat around it, and then I’ll end up mixing it a little bit and sending it to my audio engineer and then my master engineer.”

In the interview, Jones even shared that whatever place he moves into once he starts his NFL career, he will add a small studio to it.

He moved around a lot as a kid and was a tri-sport star athlete.

Marcus Jones was born in Baton Rouge, Louisiana, but with his father serving in the Army, his family was on the move a lot. At 4, he and his family moved to Dayton, Ohio, and actually began playing football at that age.

By his freshman year of high school, Jones’s family moved to Enterprise, Alabama, where he was a tri-sport athlete at Enterprise High School. In addition to playing football, Jones played basketball and ran track. He was actually an All-District basketball player and set a school record in the 200-meter dash (22.35).

But Jones dropped basketball entering his senior year of high school, calling it the “biggest risk” of his athletic career.

“I was a great basketball player and had the potential to play at the next level but saw more potential in football, so I stuck with it only,” Jones told VoyageHouston.