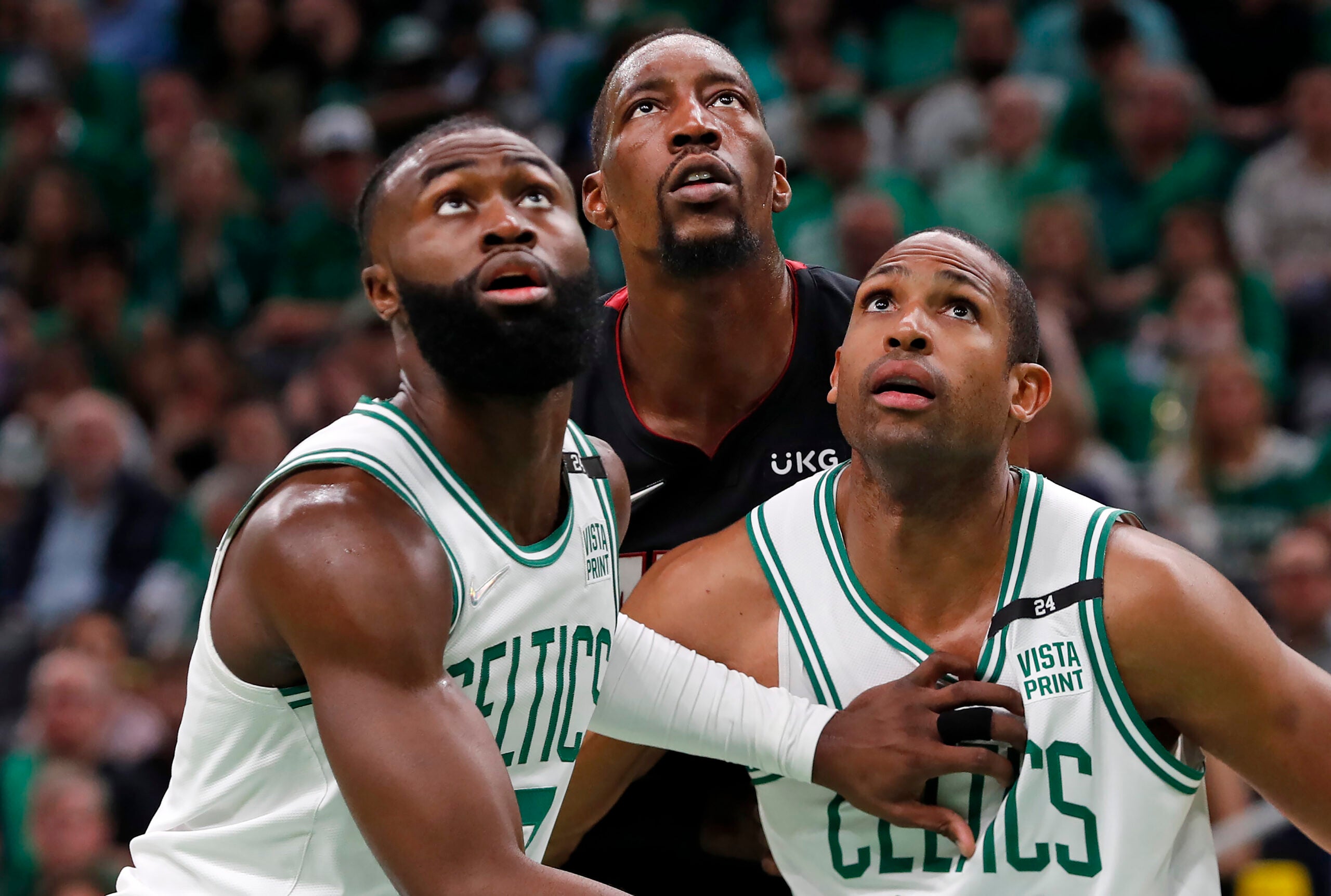 The Celtics have put together some gritty, hard-fought victories since the postseason began, but nothing quite like what the Heat pulled off in Game 3 of the Eastern Conference Finals on Saturday.

The Heat were without Jimmy Butler in the second half after Butler sat down with knee inflammation (after the game, Chris Haynes reported that Butler is fine, which seems at least somewhat unlikely given that a maniacally competitive player sat 24 of the biggest minutes of the season). The officials handed the Celtics a 30-14 advantage in free throw attempts, which was actually even greater before the Celtics fouled down the stretch. The Heat didn’t even shoot particularly well — 11-for-33 from deep after a hot start.

And somehow, the Heat still found a way to hold on and win 109-103. The Celtics won or tied the final three quarters after a disastrous opening stretch during which the Heat went up by as many as 26 points, but Miami’s lead dripped away slowly, and the Celtics never quite found the spigot to speed it up. Jaylen Brown’s 3-pointer late in the fourth cut the Heat lead to one, but the Heat had one final answer — Max Strus buried a 3-pointer with two minutes left, Adebayo scored, and Kyle Lowry capped off a wildly successful return with a clutch steal.

Given that the Heat won the game almost entirely because of live-ball turnovers, it’s tempting to say the Celtics threw away a winnable game, but that minimizes how the Heat responded after Thursday’s beatdown. Both teams are clearly capable of throwing haymakers, and both are clearly capable of absorbing them and punching back.

During this postseason run, the Celtics have been really good at rallying after from disappointing losses, which is an essential quality because they’ve dropped some truly disappointing losses. On Saturday, they were outworked and out-hustled by a Heat team and lost despite enjoying a plethora of advantages.

Now they need to rally again.

2. Saturday’s game was a war of attrition, so here’s the injury rundown from the postgame podium: Robert Williams is “truly” day-to-day per Ime Udoka and could return as soon as Monday. Marcus Smart rolled his ankle in a scary scene captured by cameras on the court, but Udoka believes he will be fine going forward. The same goes for Jayson Tatum, who suffered a stinger.

“My neck got caught in a weird position,” Tatum said. “Obviously I went down and felt some pain and discomfort in my neck and down my arm, and then went to the back, got it checked on, and started to gain some feeling back and got it checked by the doctors and ran some tests and decided to give it a go.”

Erik Spoelstra had no health updates for anyone on his team. Both Lowry and P.J. Tucker have been nursing injuries, and it’s unclear what is going on with Butler.

3. Jaylen Brown scored 40 points, but he struggled enormously against Miami’s defensive pressure and turned the ball over seven times. He and Tatum (six) combined for 13 of the Celtics’ 21 turnovers. In a game they won by six, the Heat outscored the Celtics 33-9 in points off turnovers.

“It’s happened to us a couple times this playoff run,” Horford said bluntly. “It’s something that we continue to fight, and it seemed like every time we put ourselves in a position, we turned the ball over.”

Again, the Heat had a lot to do with that, but if the Celtics hope to advance, it is imperative that they stop turning the ball over. The fact that they already solved this problem once in Game 2 makes Saturday’s performance especially odd.

“I did a s— job today taking care of the basketball,” Brown said. “But just being stronger, driving them and keep being aggressive and keep getting to the basket and keep doing what I do but be stronger when I get in there. They let a lot of stuff go tonight, especially when I feel like I drive and I get to the basket, I feel like it’s two hands on me all the time. I never get those hand-checking calls.

“But I don’t make excuses. We get better. I did a s— job taking care of the ball today. I’ve got to do better.”

Given the free-throw disparity, Brown’s comments about the officials might land on deaf ears.

4. Tatum was 3-for-14 and 1-for-7 from deep with his six turnovers. When he returned to the game in the fourth after suffering his stinger, a Celtics run that finally had some teeth to it immediately fell apart.

“I feel like I left the guys hanging tonight,” Tatum said. “That’s on me. I acknowledge that. That was a tough one.”

When asked about Tatum’s periodic off nights, Udoka said his issues were just “understanding how [the Heat] are going to guard you” then pivoted to talking about team-wide issues.

“All [the Heat] talked about was upping their physicality, being embarrassed at home, and that’s what we spoke about, not being caught off guard or complacent or content with getting a win at their place, and understanding how they’re going to guard guys, be physical, and we didn’t match that from the start,” Udoka said. “It looked like we were kind of wilting to their pressure and started complaining to the refs and took us out of the game from the start.”

If you are a Celtics fan looking for a little bit of hope on a brutal Saturday, you could do worse than the fact that Tatum is deeply unlikely to be that bad again on Monday.

5. After scoring just 16 points in Games 1 and 2 combined, Bam Adebayo had a huge evening — 31 points, 10 rebounds, six assists and four steals. Butler was superb in Game 1, but the Heat bring a lot more than just Jimmy Butler to the table.

A reporter noted to Udoka that having Robert Williams — who missed Saturday’s game with knee soreness — might have made a big difference against Adebayo.

“Adebayo kind of put his shoulder into whoever was guarding him, into their chest, so Rob can’t save the day as far as that,” Udoka said. “Guys have to take ownership of that matchup and defend like we’re capable of.”

6. Once again, the Celtics are playing for their season. The Celtics and Heat tip off Game 4 on Monday at 8:30 p.m. on ESPN.