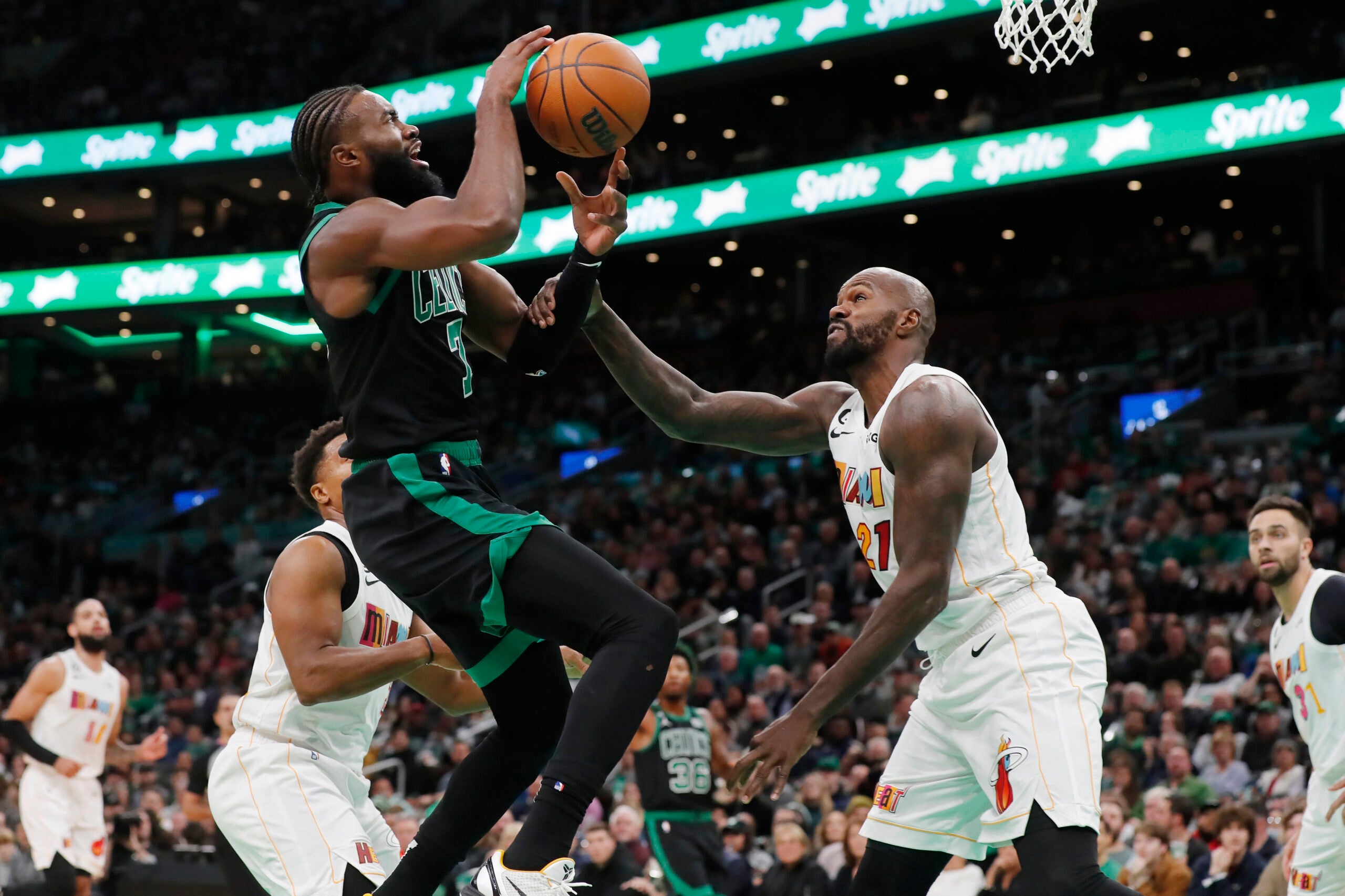 The Celtics nearly put together a perfect home stand, but they fell to the Heat 120-116 in overtime on Friday, despite a big night from Jaylen Brown.

The Celtics started slow from 3-point range, making just two of their first 12 attempts, but they righted the ship enough to even the score at 27-27. With Jayson Tatum on the bench for much of the second quarter with three fouls, the Celtics leaned on Jaylen Brown, Derrick White, and Marcus Smart to build a 62-59 break heading into halftime despite 14 first-half turnovers.

The Celtics pushed their lead to six entering the fourth and stretched it as high as 10. But the Heat rallied back, and Jimmy Butler’s jumper over Al Horford with seconds remaining gave the Heat a three-point lead.

Brown wasn’t quite ready to be done.

Overtime, however, was unkind to the Celtics once again — they lost their third OT game this season when Butler once again buried a dagger with nine seconds remaining to give the Heat a four-point lead.

Star of the Game

Butler was mediocre in his return to the floor from a knee issue … until the Heat needed him to take care of business down the stretch. The Celtics defended him well, but he still beat them in the closing minutes.

The Celtics maintained their two-game margin over the second-place Bucks after Milwaukee lost to the Lakers. The Heat are now ninth, but they are just two games behind the fourth-place Pacers.

1. Sometimes, all you can do is tip your cap.

Butler is far from the best player the Celtics face on a regular basis, but he might be the toughest for them specifically. Against Giannis Antetokounmpo and Joel Embiid, the Celtics can throw big bodies out to defend and slow them down. Butler doesn’t have their size, nor does he have explosive athleticism like Donovan Mitchell or 3-point shooting like Steph Curry. He is just tough-minded and completely unaffected by big moments.

“Jimmy’s looking always to try to put the icing on the cake,” Brown said. “Tonight two shots that, in our defensive scheme, we will live with, but Jimmy’s a big-time player, made both of them clutch in overtime to send us home.”

2. Jayson Tatum had his worst game of a transcendent, MVP-level season to date — 14 points on 5-for-18 shooting, 0-for-7 from 3-point range including a couple of costly misses late in the game. Tatum committed three fouls in the first half and played just 14 minutes, which seemed to affect his rhythm, and he picked up his fourth early in the second half trying to chase a rebound against Kyle Lowry.

Brown poured in 37 points including 19 in the second half, scoring in a variety of ways.

“I got to do more to kind of find ways to get guys going,” Brown said. “I’ve got to do a little bit to try to get JT going. We need him to get those easy baskets so it helps the flow of our team. So I could’ve passed up some shots to get a couple more guys some baskets.”

“They do a good job of clogging the lane, they’re really good with their hands,” Smart said. “We got a lot of aggressive guys and we just kept going a little too late on the passes, a few times we just lost the ball. But we put ourselves in a position to win, we still had a chance even with all the turnovers, and that’s all you can ask for.”

3. Grant Williams picked up some slack for Tatum too, scoring 18 points on 6-for-8 shooting (4-for-6 from deep). Three of Williams’ triples came in the second half, including a big one in the fourth quarter that gave the Celtics a one-point lead.

Williams and Brown were the only players to score double-digits in the second half. Derrick White went scoreless, while Al Horford and Malcolm Brogdon combined for three points.

4. The Heat demolished the Celtics in a few different areas, but the biggest one was in the pick-and-roll. Per Synergy Sports, Heat ball-handlers outscored Celtics ball-handlers 30-12 in single coverage defenses. Tyler Herro in particular got himself going en route to a team-high 28 points, but Kyle Lowry scored 20 points on 8-for-13 shooting, and Bam Adebayo set a series of crushing screens that freed up Herro.

Over the last two games, the Heat outscored the Celtics 49-16 in single-covered pick-and-roll actions. If these teams meet in the playoffs, the Celtics will need to figure out a way to tamp down that discrepancy.

5. Both teams got hit with delay-of-game warnings before the game even tipped off, which foreshadowed a whistle-happy first half. Officials called 25 fouls in 24 first-half minutes, and they combined for 28 first-half trips to the free-throw line. That slowed down a little bit in the second half (the Celtics went to the line 28 times to Miami’s 18), but the first two quarters were choppy to watch and put key players on both sides in foul trouble.

6. The Heat entered Friday’s game reeling at 10-12, but Butler’s return seemed to steady them. The past three days were a good reminder for the Celtics that the Heat remain a contender despite their record. After all, last year’s Celtics were 23-24 and still made a run to the Finals. The Heat have more than enough time to turn things around, and they were seconds away from upending the Celtics again last year.

“We’ve been developing this kind of resiliency and grit for the last few weeks,” Erik Spoelstra said after the game. “Our record is probably deceiving to everybody on the outside, but things have been trending in a much better direction, even while we were dealing with a bunch of injuries and everything.”

The Celtics certainly aren’t counting the Heat out.

“Tonight, we weren’t as ready as we usually are and they got the best of us,” Smart said. “So you tip your hat off to a really good team. Spo (Spoelstra) does a really good job with those guys. And each and every day you see it, so we love playing them. They challenge us and they make us be the best we can be.”

7. Rounding things out, here’s a quick check-in on J.D. Davison.

The Celtics take on the Nets on Sunday at 6 p.m.