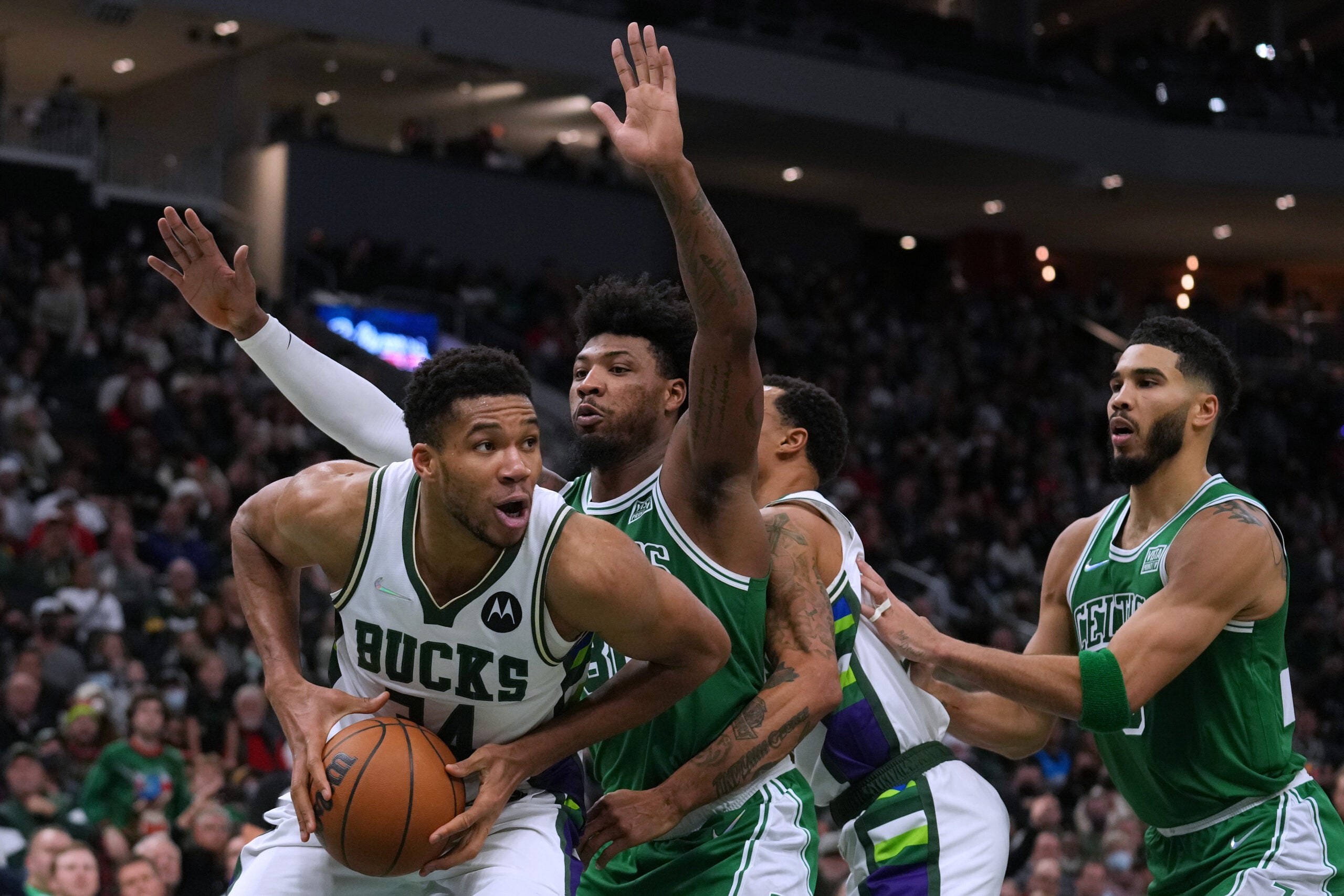 It’s official: The Celtics will take on Giannis Antetokounmpo and the Milwaukee Bucks in the Eastern Conference semifinals after the Bucks finished off a 4-1 series victory over the Bulls on Wednesday.

Here are nine things to watch when the semis begin at 1:00 p.m. on Sunday.

1. After the Celtics went up 3-0 on the Nets, we noted Ime Udoka’s remarks at his introductory press conference, in which he told reporters he once advised Kawhi Leonard against giving other superstars “too much” respect — advice that he planned to pass to Jayson Tatum and Jaylen Brown. Watching Tatum step up on both ends and sweep Kevin Durant out of the playoffs felt like a major moment in Tatum’s development — he dethroned a superstar he grew up watching.

Knocking off Durant is one thing — a rite of passage many superstars get to experience once they reach a certain status in the NBA. There’s a natural order to young stars outlasting older stars. Just ask LeBron James about beating Kevin Garnett, or even Tatum himself about playing against Paul George and Carmelo Anthony.

For Tatum to really ascend, however, he needs to reach and surpass his peers. A series against Antetokounmpo and the Bucks is an opportunity to do that — a chance to send a message to the rest of the NBA that Tatum is no longer an up-and-comer but an established, No Questions Asked superstar capable of beating an MVP in his prime. That’s not to say Tatum needs to win every game against Antetokounmpo, but in order to rise into Antetokounmpo’s ranks, it needs to be a little unclear which player is better.

Tatum and the Celtics have a chance to knock the crown off the king. This series will be fascinating.

“We’re going to have to play really good teams regardless,” Udoka said on Wednesday. “So one thing we talked about is we’re a basketball team, not a track team. [We’re] not running from people. So focus on it that way.”

2. The series begins at 1 p.m. on Sunday. Here’s the full schedule.

3. Here’s why it matters if Robert Williams is healthy.

The Celtics, fortunately, will no longer rely on Jabari Parker to defend Antetokounmpo at the point of attack — that job will likely fall to Al Horford, and when Horford takes a rest, Grant Williams will likely be asked to reprise some of his defensive brilliance from the series against the Nets. Perhaps no individual player has defended Antetokounmpo better over the course of his career than Horford — yet another reason the Celtics should be ecstatic with Brad Stevens’ decision to re-acquire their old friend this summer.

The Celtics won’t be able to stop Antetokounmpo, and they might not try to do so — a more prudent defensive plan might be trying to hold his shooting percentages down while locking up the Bucks’ perimeter shooters. If Antetokounmpo beats you by driving headlong into Al Horford repeatedly, so be it.

Still, having that last line of defense is crucial. If Horford and/or Grant Williams can slow Antetokounmpo down a bit, Robert Williams’ ability to rotate over and protect the rim could be a factor.

On Wednesday, Williams said he didn’t quite feel like himself against the Nets.

“I felt like I was a step behind defensively, to be honest,” he said. “Just knocking the rust off, being able to move certain ways goes back to the being in shape part. Just playing in games is the only thing that can help.”

4. With the caveat that stats can be a little weird the year after winning a title, the Bucks were a middle-of-the-pack defensive team this season. Per Cleaning the Glass, Milwaukee ranked 12th among all teams in points per 100 possession (garbage-time stats excluded). Opponents shot 0.4 percent worse against the Bucks, which was 13th in the NBA (the Celtics, by comparison, held opponents to a league-best 2.6 percent worse shooting).

Two years ago, the Bucks were the NBA’s best defense. This iteration just isn’t the same team on that end.

5. Khris Middleton reportedly could miss the entire series with his sprained MCL, according to ESPN’s Adrian Wojnarowski. If he does, the Celtics will benefit enormously — Middleton has been notorious for torturing the Celtics over the years (to be abundantly clear, the hope here is that Middleton plays and we get to see both teams compete at full strength).

In other words, the Celtics have a chance to run up the score when Antetokounmpo sits.

6. Finding good film of the Celtics and Bucks is a bit of a challenge. The two teams went 2-2 against each other this season. The Celtics won in OT without Antetokounmpo and Middleton in their first meeting. With both teams at full health, the Celtics won 117-103 on Dec. 13 (credit Al Horford for the defense on Antetokounmpo). The Bucks won on Christmas Day, and then won again in April when the Celtics rested Jayson Tatum.

In other words, only one meeting between the two teams happened after the Celtics turned their season around, and Tatum didn’t play. Drawing conclusions from any of those contests is probably irresponsible.

7. With that said, it feels somewhat noteworthy that Tatum averaged 31.3 points per game against the Bucks this season while shooting 44.4 percent from the 3-point line. Few teams have a good answer for Tatum, but the Bucks don’t even have a player like Bruce Brown who can harass him.

8. Losing Middleton hurts the Bucks, but Jrue Holiday is having one of the best seasons of his career. He’s averaging 18.3 points per game while shooting a career-high 41.1 percent from deep in addition to his usual defensive prowess.

9. When Udoka was asked about the upcoming series on Wednesday afternoon prior to Game 5, he was careful not to say that the Celtics expect to play either team.

Still, he noted that the Celtics have had success against both the Bulls and Bucks.

“So understanding that they’re not going to beat themselves, they’re going to play with a more physical style defensively and we’re prepared for that,” Udoka said. “I think our record and what we’ve done over the last few months has shown we’ve seen a lot of really good defensive teams, some really good offensive teams, and we’ve managed that well.”