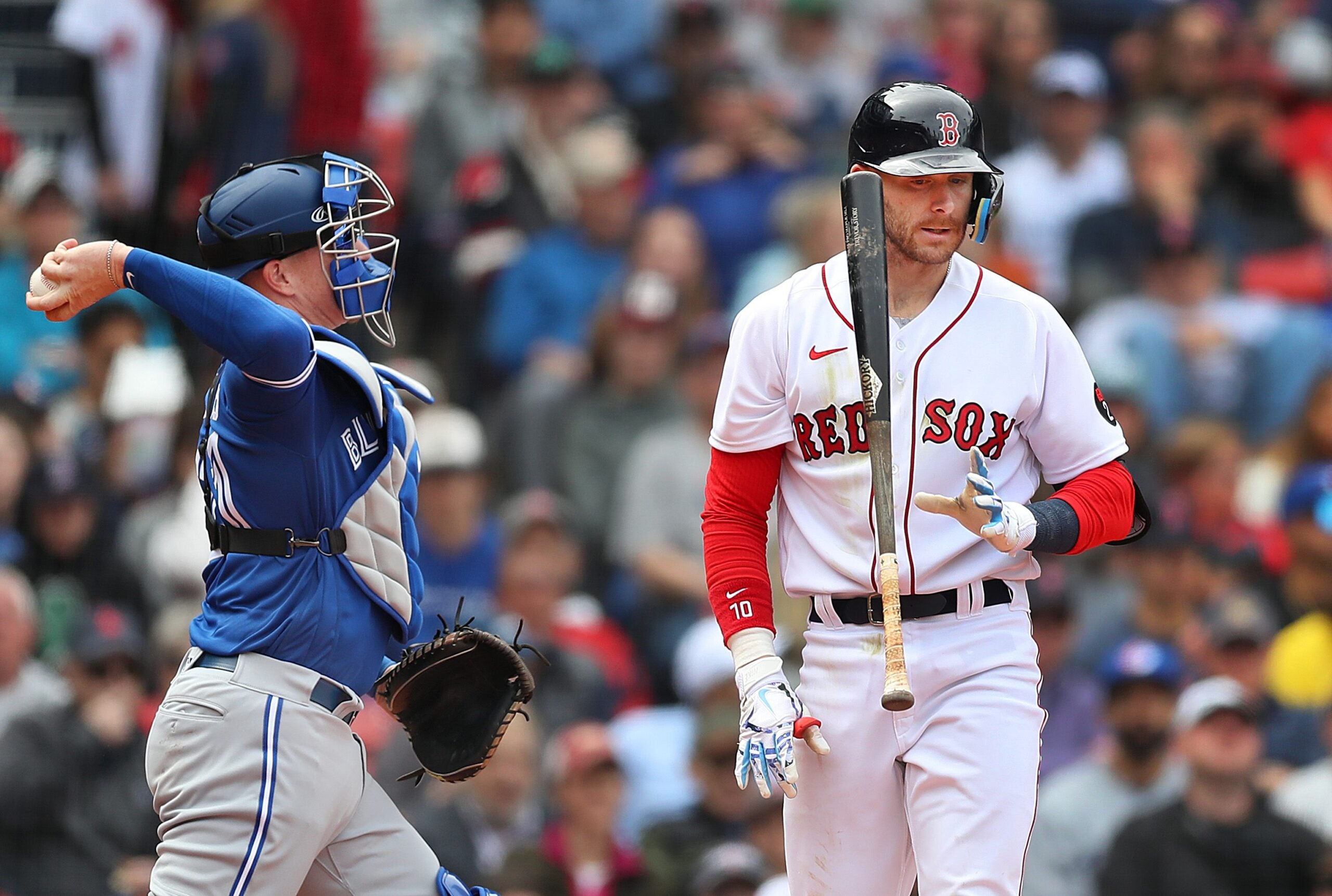 1. Don’t sweat this aspect of the Red Sox’ lousy start: They’re going to hit, and soon. They haven’t had much luck when they’ve barreled the ball, but that will change, and a lineup with a core of Rafael Devers, Xander Bogaerts, Trevor Story, and J.D. Martinez is going to keep the scoreboard operator busy.

That noted, it is bewildering how collectively inept the Sox have been offensively. Consider this: Through Tuesday, the Red Sox had a collective 660 plate appearances in 18 games. That amounts to a full season’s worth of trips to the plate for an everyday player, right? (Devers had 664 last year.)

How bad is their teamwide .620 OPS? Only two players who qualified for the batting title last year had a lower OPS: Kevin Newman of the Pirates (.574) and Elvis Andrus of the A’s (.614).

2. That’s not to suggest that there aren’t real holes; it’s ridiculous that Chaim Bloom couldn’t find one righthanded-hitting, competent-fielding right fielder at a price he liked, because it’s always about the price.

Trading Hunter Renfroe (off to a slow start in Milwaukee) was a justifiable decision. They sold high and got two interesting prospects in shortstop David Hamilton (.960 OPS so far at Double A Portland) and third baseman Alex Binelas (6 homers in 66 plate appearances at Single A Greenville).

But it’s borderline negligent to start the season with a platoon of Jackie Bradley Jr. (.497 OPS last year, but not a batting-title qualifier, excluding him from our previous exercise) and Christian Arroyo (a career infielder with a long injury history and a so-so bat).

3. Let’s give the analytics aces the benefit of the doubt and assume that this new approach to deploying a pitching staff — stacking certain relievers with certain starters, resisting letting most pitchers go through the order more than twice, and so on — might help a team win an extra ballgame or two in the long run.

But even if that’s the case, it’s so aesthetically unappealing and antithetical to the traditional concept of trusty, workhorse starting pitchers that it detracts from the experience of watching a game. This new way may give the Red Sox a slightly better chance at winning, but it sure seems to take away enjoyment in larger increments.

4. Here’s one example of how much pitching-staff usage and roster manipulation have changed, especially recently: The Red Sox have already used 19 pitchers this season. Some of that is due to the abbreviated spring training, of course, and the team having the foresight to avoid ramping up workloads too quickly.

Still: In 18 games, they already used 19 pitchers. In 1986, over the full 162-game regular season, the AL champions used a total of 18 pitchers, and that included Wes Gardner, who pitched a single inning.

5. Here’s another tangentially related example: The 2004 Red Sox, that beloved baseball version of the Ghostbusters, had five pitchers make at least 29 starts: Pedro Martinez, Curt Schilling, Tim Wakefield, Derek Lowe, and Bronson Arroyo. Schilling averaged more than 7 innings per start. Martinez, Wakefield, and Arroyo averaged more than 6, while Lowe averaged 5.1 in what was a rough season (5.42 ERA) until his recurring star turns in the postseason.

Right now, the Red Sox have one starting pitcher averaging more than 5 innings per start: Nate Eovaldi at 5.1.

6. Tanner “I Would Do Anything For The Team, But I Won’t Do That” Houck’s choice not to get the COVID-19 vaccine contributed directly to the Red Sox’ gut-punch losses in the first two games of the Toronto series. His absence led to the Red Sox using Whitlock as a starter, which led to a massive void in the already shaky bullpen, which led to pitchers such as Jake Diekman being slotted into situations they should not be asked to handle.

Several pitchers who were in Toronto failed to do their jobs. But even before they took the mound, they were failed by one who wasn’t there. Spare me any tangled rationalizations attempting to absolve him.

7. You know what would make fans feel better about this team right now, and might even give the team itself a boost? Signing one of their really good players to a new and fair contract. Devers, Bogaerts, Eovaldi, even Kiké Hernández, take your pick.

Bloom loves his roster flexibility, and roster churn is fine when a team succeeds as they did last year. But when things aren’t going well, it’s much easier to check out when you know there’s a decent chance your favorite player isn’t long for this place.

8. Resist the temptation to look to prospect Triston Casas as an immediate solution to the offensive struggles. The 22-year-old’s future is bright, and he’s swinging the bat well in Worcester (.906 OPS), but he has played just 103 games above Single A, and his power is just now starting to show up consistently. The best thing for him right now is to pummel the ball in Triple A and experience sustained success.

9. Until the Red Sox straighten this out — or if, I suppose — it’s probably wise to stop referring to them as the Tampa Bay Sox or whatever. The Rays won 100 games last year, 96 in ‘19, and went 40-20 in the COVID-abbreviated ‘20 season. The Red Sox should be so consistent year to year.