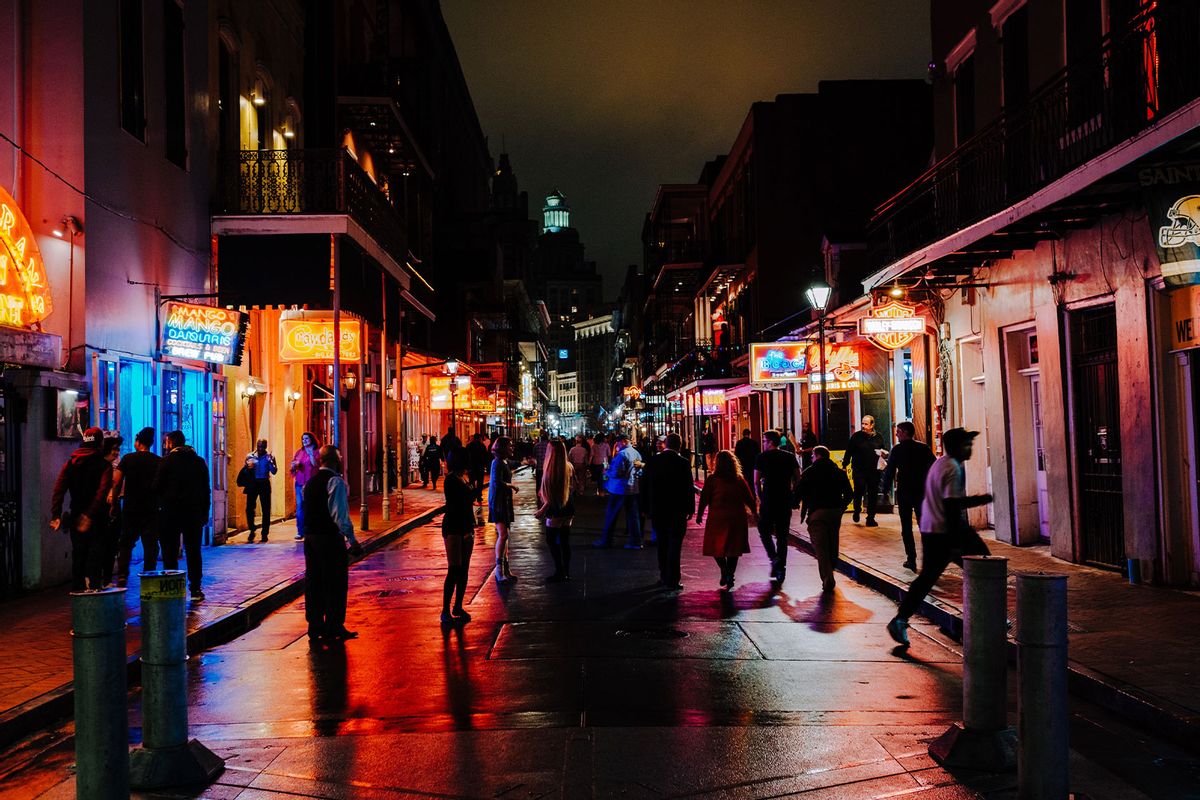 Sometimes my travels take me to places I’ve always wanted to visit, and other times, I adventure in cities that were never on my radar. New Orleans was certainly the latter. I knew next to nothing about the city, other than its popular drinking culture, great food and of course, “NCIS: New Orleans.” Since I’ve never been a big drinker, and heavy drinking culture kind of skeeves me out, it’s never been high on my list of must-visit cities.

My passing impressions from pop culture couldn’t be further from accurate. Sure, there is an active bar and drinking scene, but New Orleans has so much to offer its visitors. The first thing that hit me when I arrived was the thick heat. It had to have been over 90 degrees in early May, which was definitely a shock to my system coming from Milwaukee, Wisconsin, but with a bottle of water in hand, I was ready to take on the city.

Come along, let’s talk about being fat in NOLA.

But once you get past the hubbub and get to your room, you’re transported into a relaxing, luxurious room with a gloriously comfortable bed, and massive European-style bathroom. Our room also had a beautiful freestanding tub, which I was easily able to enjoy.

Speaking of relaxing, before heading off to adventure in the city, get breakfast at the hotel restaurant Chemin a la Mer. In addition to a glorious view of the city and the river, Chemin a la Mer has the very best pancakes on the menu that I’ve ever had at a restaurant!

Squish factor: Like most hotels, the towels couldn’t wrap all the way around me, and the robes were too small. However, despite the European-style bathroom with a separate water closet, the bathroom had enough room to be comfortable.

Have you ever eaten a meal that you just know you won’t be forgetting any time soon? Well, my dinner at Compère Lapin was definitely one of those meals. Chef Nina Compton grew up in St. Lucia, and with classic Fresh culinary training under her belt, “she mixes the indigenous ingredients and rich culinary heritage of New Orleans with those of her Caribbean roots,” creating magic on a plate. That might seem like an overused cliche, but when it comes to Chef Compton, it’s the real deal. 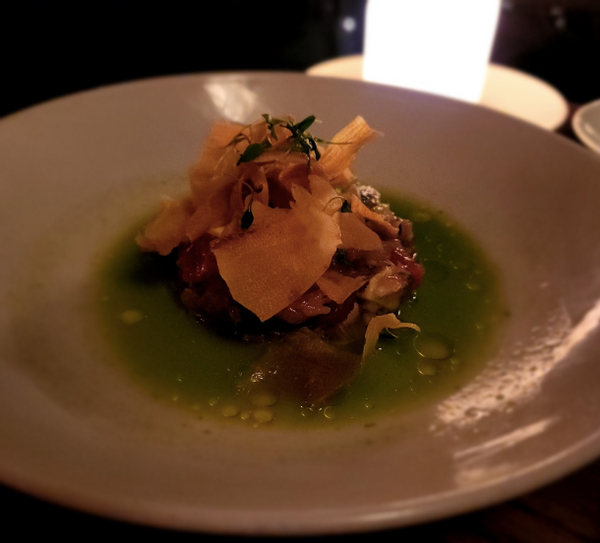 Dinner started with buttermilk biscuits which you certainly should not skip as they were heavenly. The broiled peel-and-eat jumbo shrimp surprised me with just how much flavor Chef Compton managed to infuse them with. They were so good I didn’t mind the slightly annoying task of peeling them at the table. Then there was the curried goat with sweet potato gnocchi — a genius combination that requires you to throw everything that you think of when you eat curry, goat or gnocchi out the window to enjoy. I could eat just that as a whole meal.

Be sure to end your meal with the Bolivian chocolate cake with passionfruit even if you usually skip chocolate desserts because it was simply divine.

I’ve always enjoyed just about anything that happens on a boat. Romantic dinner cruises, fishing boats and even ferries keep a permanent smile plastered on my face. There is just something special about feeling the wind in your hair while you enjoy the beauty of nature. And if you’re visiting New Orleans, that means taking a swamp and bayou tour. Grayline offers the full experience, including a relatively comfortable bus out to Jean Lafitte National Historical Park-Barataria Preserve, and then the boat tour itself.

You’ll be serenaded with local history on the ride over and have plenty of time to buy an alcoholic slushie to enjoy on board. There are snacks, too! The tour itself is very relaxed. What exactly you’ll see depends on the season — I was expecting to see more wildlife than we did — but the crocodiles were definitely worth going out for!

Squish factor: We took the traditional tour, which I’m grateful for since once we arrived the airboats didn’t look particularly accessible.

For Middle Eastern-inspired food with Jewish roots that’s full of flavor and joy, you’ll have to make reservations at Saba. We were seated on the patio which was a really relaxing way to enjoy a really hearty meal. The Louisiana blue crab-topped hummus was a fascinating combination that worked really well, and you absolutely must get a floral soda which is a refreshing addition to any meal (add a shot of vodka if you’re partial to a cocktail). 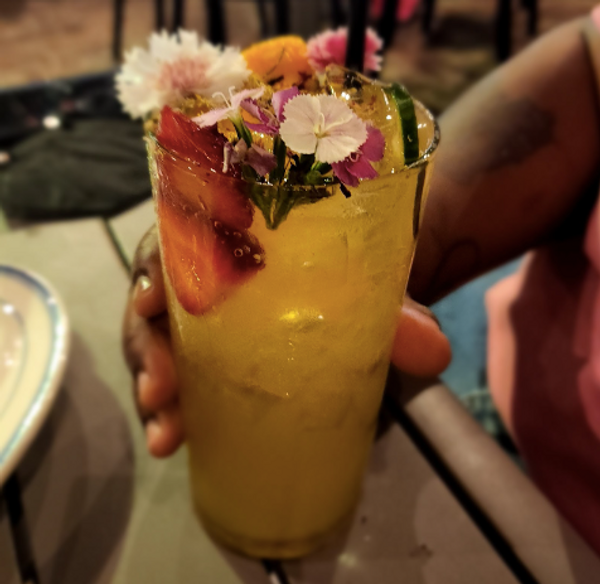 While I don’t usually order chicken, the harissa roasted chicken with charred scallions and caramelized lemon was perfectly balanced. There is only one thing on the menu that I wouldn’t order: the duck matzah ball soup. But that might be because I grew up on the stuff and have a very specific idea of how it should taste.

Squish factor: While the chairs outside don’t have arms and were relatively wide, they do have a little ledge that can be really uncomfortable if you spill over the edge of the seat. 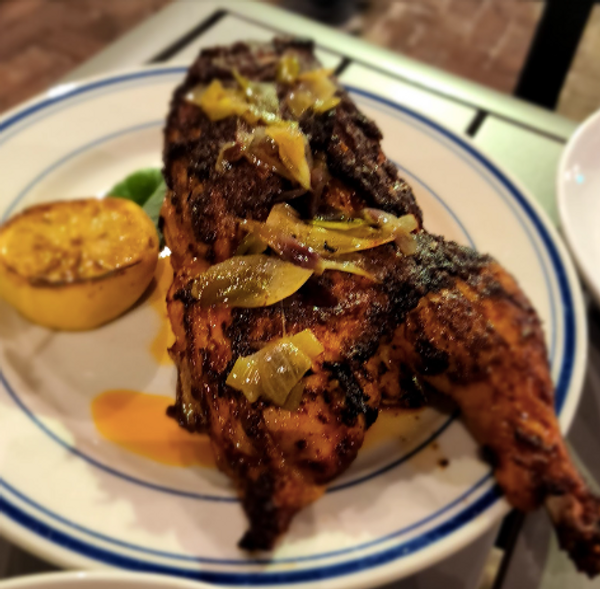 Folks, not only did the Waldorf Astoria Spa in the Roosevelt Hotel have a robe big enough to actually cover all of me, but they have the locker rooms set up so you get a locker with a robe that should fit you right away, without having to ask for one. And the locker room attendant was plus size, too!

Morgan and I enjoyed a leisurely glass of champagne and chocolates in a relaxation room, before being whisked off to the treatment room.

Laying on my stomach can be difficult for me sometimes, as my chest is so big I feel like I’m suffocating. Usually, I deal with it for a massage, but this time I asked for a massage on my back, and the massage therapist happily obliged. It was a perfect way to enjoy a glamorous afternoon in NOLA.

For a peak old-school dining experience that isn’t a steakhouse, you’ll have to give Brennan’s a try. Not only do they knock the favorites out of the ballpark, but their unique spins on more contemporary cuisine are nothing short of marvelous. I had the pleasure of enjoying the perfect spring appetizer salad made of fresh asparagus and avocado with salmon roe and horseradish cream, which was truly to die for. You shouldn’t miss it.

The steak tartare was traditional with a twist, served on top of a potato hashbrown, for the perfect bite. For dessert, we got one of those flambé desserts, which was just a little too sweet for me. But a little sprinkle of salt fixed that, and the meal ended on a good note. My only regret was visiting for brunch and not going all out for dinner, because Brennan’s deserves your full attention.

Museum of The Southern Jewish Experience

If you’ve been watching my Tiktoks or reading my travel articles, you’ve probably noticed that I’m not really big on Museums. I’m more interested in finding out-of-the-box experiences, hands-on workshops, and of course, mouth-watering meals, but I occasionally make exceptions. The Museum of the Southern Jewish Experience is one such exception. My parents were immigrants to this country, refugees, and Chassidic Jews, but I never learned much about the history of southern Jewish people.

The museum is relatively small, but the history was familiar to me, like reading the same book, just from a different perspective. If you know little about the history of Jewish immigrants, involvement in slavery, and social justice, and how they kept Jewish history and traditions alive — you’ll want to carve out an hour while you’re in town. While there were several interactive elements and some artifacts, the museum is text-heavy, so come ready to read a lot.

If you want a meal that’s a little different from the same old restaurant service, you’ll want to take a cooking class (I took the brunch one) at the Mardi Gras School of Cooking. Not only will you learn how to make New Orleans favorites like delicate crab cakes and rich creamy shrimp and grits, but you’ll also get to enjoy the meal you made with newfound friends. And bottomless mimosas and other beverages are included. The class I took was really easy to follow and hands-on. That means you’ll actually be peeling and deveining shrimp, chopping veggies for the holy trinity and poaching eggs. You’ll even learn how to make a shrimp stock! You’ll go home with new recipes to enjoy and a full belly.