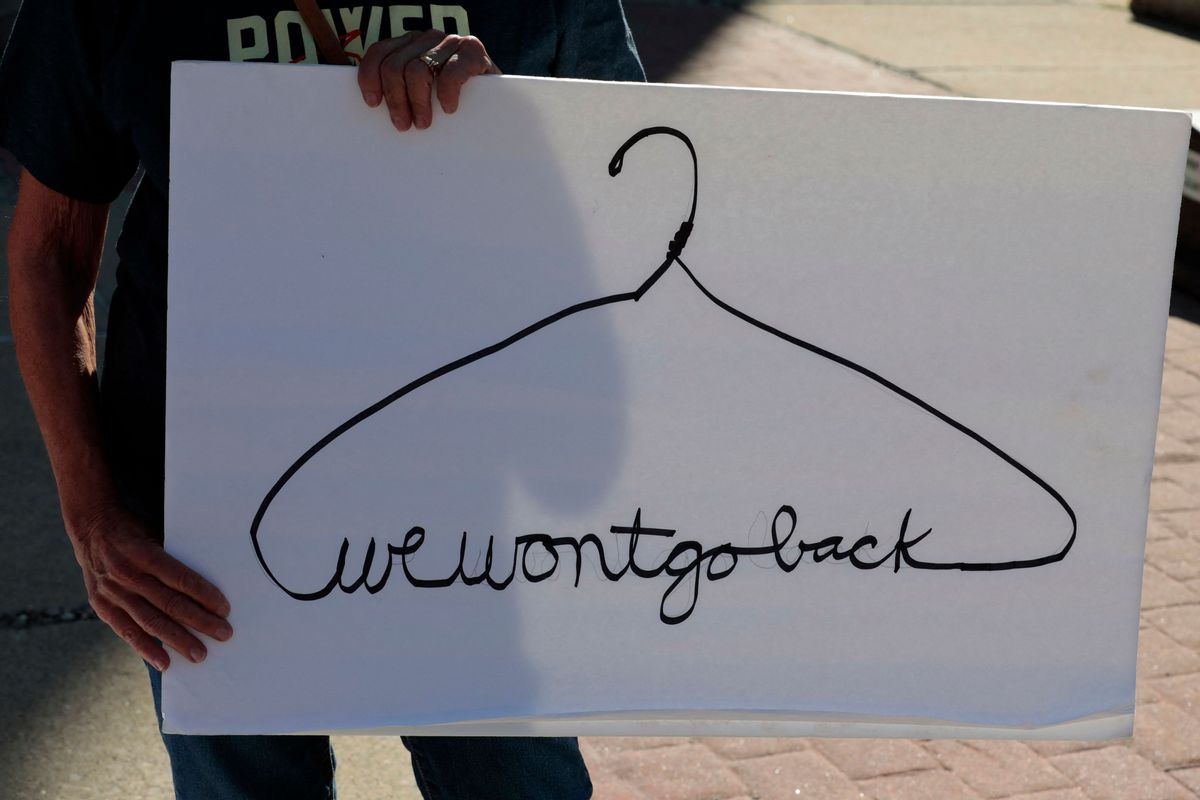 Sitting in a booth at a Cheddar’s in Little Rock, Maryanna, 16, wasn’t sure of the last time she’d been to a sit-down restaurant. With two children — a daughter she birthed at 14 and a 4-month-old son — and sharing rent with her mother and sister for a cramped apartment with a dwindling number of working lights, Maryanna rarely got out, let alone to devour a Cheddar’s Legendary Monster Cookie.

On this muggy September evening, though, she was having dinner with her “sister friend” Zenobia Harris, who runs the Arkansas Birthing Project, an organization working to reduce the odds that Arkansas women and girls die from pregnancy and childbirth. In a highchair next to her, Maryanna’s daughter, Bry’anna, spiraled sideways and backward, her arms outstretched, flying. Her eyes would settle on her grilled cheese, and she’d swoop her small hand down to pick up the sandwich.

Maryanna suffered mightily during Bry’anna’s birth. (KHN is not using the family’s last name to protect Maryanna’s privacy.) She remembers telling her mother, “I don’t want to do none of this.” Nurses routinely checked to see how far she had dilated, a painful prodding of the cervix typically done before pain medications are administered.

“Nobody talks about that. I would not open my legs wide enough for them,” she said, cringing at the memory. “There were seven nurses up in there, and I was like, ‘No! Why ya’ll doing this?'”

Hours later, a doctor used vacuum suction to pull the baby through Maryanna’s 14-year-old vaginal canal, ripping apart the skin and muscle of her perineum.

Teenagers in Arkansas do not have significantly more sex than teens elsewhere, according to a 2019 risk behavior survey by the Centers for Disease Control and Prevention, but they are far less likely to use birth control. Sex education is not required in Arkansas schools and, by law, any school-based curriculum must stress abstinence.

In 2017, Gov. Asa Hutchinson, a Republican, successfully jettisoned Planned Parenthood clinics from the state’s Medicaid program. Since then, girls and women who receive medical care at the organization’s clinics cannot use Medicaid coverage to obtain contraception.

Arkansas’ trigger ban outlawing abortion went into effect the day the Dobbs v. Jackson Women’s Health Organization decision came down in June. A woman can receive an abortion only if her death is imminent. For teenagers seeking medical care to end a pregnancy, the nearest clinic where abortion is accessible is in Illinois, 400 miles northeast of Little Rock, a six-hour drive.

“If you’re from a small town in Arkansas, the idea of going to Chicago or Colorado, it may as well be on the moon,” said Gordon Low, a nurse practitioner at Planned Parenthood in Little Rock. Faced with finding a car and gas money, or dealing with a school absence, teenagers “may throw their hands up and continue with the pregnancy, even if they don’t want to.”

For Maryanna, abortion did not really seem an option even before the Dobbs decision. Like many adolescent girls in Arkansas, her extended family is filled with moms who gave birth as teens and whose children grew up to do the same. It’s the life she knows, and, at least at first, the notion of having a baby seemed a respite from the chaos of her family life.

Bry’anna’s father, who Maryanna believes is 19, is not in the picture. She was in eighth grade when her mother, battling her own stresses, took off — temporarily, it turned out — and left Maryanna and her siblings with her “brother’s baby mother’s family.” Into that stew of terrifying uncertainty, the texts from an older boy felt comforting.

They’d been texting each other for a month, with the boy “acting like he could relate to me,” she said. “He was, like, ‘Your momma gone, so you might as well do this or that.’ I just fell for it.” She remembers thinking, “Yeah, she is gone. She told me to save my virginity, but who listens to her anymore? I was just upset.”

Girls’ menstrual cycles can take years to settle into a predictable routine, and Maryanna initially made nothing of the fact that it had been months since she last bled. By then, her mother had returned and the family was living, periodically, in a motel. She considered adding water to her pee to outsmart the pregnancy test, but, she said, “Something was telling me, ‘No, you want to know the truth.'”

A few months after Bry’anna’s birth, Maryanna had sex with an older teenager who only pretended to put a condom on, she said. She gave birth to her son, Tai’lyn, in April.

The young man’s name is listed on Tai’lyn’s birth certificate, but like Bry’anna’s father, he has never paid child support.

Traditionally, teen motherhood is viewed as a symptom of poverty, invoking puzzled head-shaking by wizened adults and calls from many conservative lawmakers for young, unmarried people to stop having sex. But it is also a dangerous undertaking for a teen mother and baby.

Infant mortality rates in Arkansas are highest for babies born to women younger than 20, and the large number of teen births fuels the state’s third-highest infant mortality rate in the country. Arkansas women have the highest rate of pregnancy-related deaths in the U.S., according to CDC data, about double the national average.

For young women who continue their pregnancies, the emotional and physical challenges can be daunting. The age at which girls in the U.S. begin menstruating has dropped in recent decades, in part due to widespread obesity, but the physiological changes necessary to birth and feed a newborn require additional years of development.

“When she has her first menstruation, she is capable of becoming pregnant, but that doesn’t mean she is capable of having a child,” said Dr. Dilys Walker, director of global health research for the Bixby Center for Global Reproductive Health at the University of California-San Francisco.

Walker explained that during adolescent development, the beginning of menarche signals the start of a growth spurt that can take up to four years to complete. During that time, a girl’s uterus and bony structures, including her pelvis, remain narrow, developing slowly as she ages.

It’s a precarious moment to give birth. It’s not uncommon for girls to face obstructed labor “because their pelvis is not developed enough to accommodate a vaginal delivery,” said Dr. Sarah Prager, an obstetrics and gynecology professor at the University of Washington School of Medicine.

Going through with a vaginal birth could cause lasting damage to a teen’s pelvic area and rectum. So, teenage childbirth often ends in cesarean section, causing uterine scarring that almost guarantees she will need to give birth via cesarean section if she has more children.

Abortion opponents have argued in recent months that girls are duty-bound to give birth no matter how old they are. In the high-profile case of a 10-year-old rape victim from Ohio who traveled to Indiana for an abortion, James Bopp, chief counsel for the National Right to Life Committee, said, “She would have had the baby, and as many women who have had babies as a result of rape, we would hope that she would understand the reason and ultimately the benefit of having the child.”

A judge in Florida recently ruled that a 16-year-old girl “had not established by clear and convincing evidence that she was sufficiently mature to decide whether to terminate her pregnancy.”

The elevated risks of teen childbirth were not weighed.

Hajime White saw what preeclampsia can do to a young woman close-up, when it nearly killed her daughter.

Hajime lives in Warren, a lumber town 90 miles south of Little Rock, where she helps run the Precious Jewels Birthing Project, an offshoot of Zenobia’s Arkansas Birthing Project that offers support for pregnant women and girls and new moms. Hajime was in 11th grade when she got pregnant the first time; the fetus grew without a brain and died inside her. Full of grief, she married her boyfriend. They went on to have six girls, ages 17 to 30, and recently celebrated their 30th wedding anniversary.

On a recent Sunday, after playing piano for the liturgy at St. John African Methodist Episcopal Church, she met her cousin, Monique Davis, at a Mexican restaurant in downtown Warren to assess the needs of the week. Women reach out in need of diapers, breast pumps, formula, and, quite frankly, said Hajime, money.

The “sister friends” counsel their “jewels” to take prenatal vitamins and see a doctor. Self-denigration is a common response Hajime will not let stand. “They’ll say, ‘I’ll just be like my mama. I’m not going to amount to nothing.’ And I was like, ‘No! You got a life ahead of you.'”

That was the message she gave her own daughter Gwen, who became pregnant at 16. Hajime remembered how, when she was a pregnant teen, her grandmother pronounced her life ruined. “She said, ‘Everything you ever did is over with.'”

About a third of the girls who drop out of high school cite pregnancy or parenthood, and Hajime was determined to keep Gwen in school. “She never stopped because she had the support of me, her dad, her sisters,” Hajime said. Two of her daughters are in college, another just graduated from high school, and Gwen earned a degree in pharmacy tech. Her oldest daughter, Majestic, is a certified nursing assistant.

It was a surprise, then, when Gwen, pregnant with her second child at 21, felt piercing pain in her pelvis last spring. Her doctor advised standard pregnancy fare: a pillow between her legs, light stretching. By eight months, Gwen’s petite legs were swollen, stretching tight her ankle bracelets. The doctor blamed too much salt. In July, she was willing herself to enjoy her baby shower when pain ricocheted inside. She could barely breathe on the drive to the hospital.

Gwen went in and out of consciousness as the swelling moved into her chest and her face turned dark. “We would try to wake her back up, her eyes would look at us, she was there, but she wasn’t there,” said Hajime. With protein levels in her urine dangerously high, symptoms that had once been dismissed — water retention, seizures — were now full-fledged preeclampsia, a potentially fatal syndrome marked by rising blood pressure. With the baby in distress, doctors performed a C-section.

Two months later, itty-bitty Quen slept on Gwen’s lap inside an air-conditioned studio shed on her mother’s property. Gwen is still recovering. Breastfeeding after surgery has been painful, and she is advised against lifting anything.

Back in Little Rock, in between spoonfuls of Cheddar’s Legendary Monster Cookie, Maryanna said she is dead set on staying un-pregnant. “I can’t mess up again,” she told Zenobia. “I’m kinda scared of sex now. I’m paranoid. Everybody trying to trap you.”

One of Maryanna’s brothers, she confided, recently found out his girlfriend was pregnant. The couple already have an infant. “She can’t afford another baby right now,” Maryanna said. Would she make the journey to Illinois? “I don’t think she has a way out of state.”