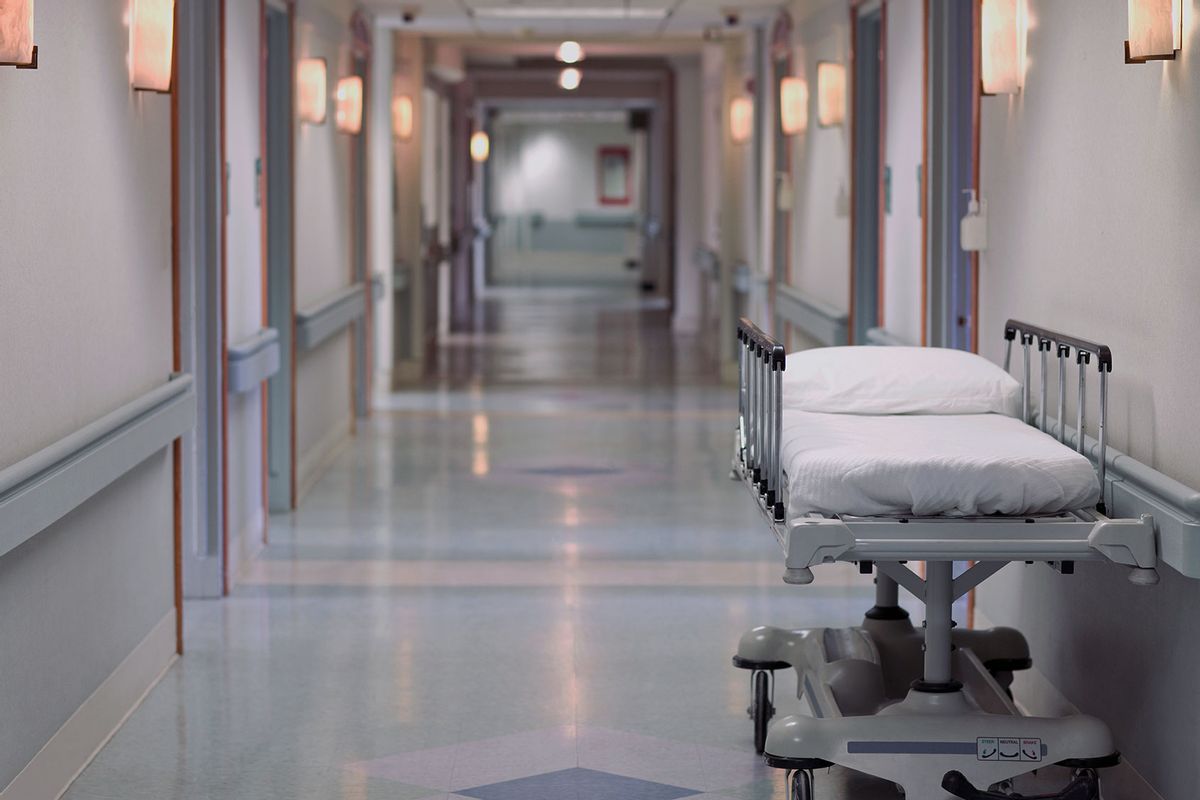 MARSHALLTOWN, Iowa — Andrea Storjohann is glad to see that she’s becoming less of a rarity in rural America.

The nurse practitioner prescribes medication to dozens of patients trying to recover from addiction to heroin or opioid painkillers.

The general-practice clinic where she works, housed in a repurposed supermarket building, has no signs designating it as a place for people to seek treatment for drug addiction, which is how Storjohann wants it.

Privacy is an important part of the treatment. And so is the medication Storjohann prescribes: buprenorphine, which staves off cravings and prevents withdrawal symptoms for people who have stopped misusing opioid drugs. The central Iowa clinic, owned by the nonprofit agency Primary Health Care, has offered buprenorphine since 2016. “We were kind of a unicorn in this part of the state,” Storjohann said, but that’s changing.

Unlike methadone, the traditional medication to wean people off heroin or other opioids, buprenorphine can be prescribed at primary care clinics and dispensed at neighborhood pharmacies. Federal and state authorities have encouraged more front-line health care professionals to prescribe Suboxone and other medications containing buprenorphine for patients trying to overcome opioid addiction. Federal regulators have made it easier for doctors, nurse practitioners, and physician assistants to become certified to offer the service.

The opioid crisis has deepened in the past decade with the illicit distribution of fentanyl, a powerful, extremely addictive opioid. Its prevalence has complicated the use of medication to treat opioid addiction. Patients who have been misusing fentanyl can suffer severe withdrawal symptoms when they begin taking buprenorphine, so health practitioners must be careful when starting the treatment.

In Iowa, officials designated $3.8 million from the state’s initial share of opioid lawsuit settlement money for a University of Iowa program that helps health care providers understand how to use the medications.

Federal agencies are spending millions to expand access to medication to treat addictions, including in rural areas. The Health Resources and Services Administration, which aims to improve health care for underserved people, offers many of these grants.

In 2016, just 40% of rural counties nationwide had at least one health care provider certified to prescribe buprenorphine, according to a University of Washington study. That figure climbed to 63% by 2020, the study found.

The study credited the rise to changes in federal rules that allow nurse practitioners, physician assistants, and other midlevel health care providers to prescribe buprenorphine. In the past, only physicians could do so, and many rural counties lacked doctors.

Buprenorphine is an opioid that pharmacies most often sell as a tablet or a film that both dissolve under the tongue. It does not cause the same kind of high as other opioid drugs do, but it can prevent the debilitating withdrawal effects experienced with those drugs. Without that help, many people relapse into risky drug use.

The idea of opioid “maintenance treatment” has been around for more than 50 years, mainly in the form of methadone. That drug is also an opioid that can reduce the chance of relapse into misusing heroin or painkillers. But the use of methadone for addiction treatment is tightly regulated, due to concerns that it can be abused.

Only specialized clinics offer methadone maintenance treatment, and most of them are in cities. Many patients starting methadone treatment are required to travel daily to the clinics, where staffers watch them swallow their medicine.

Federal regulators approved Suboxone in 2002, opening an avenue for addiction treatment in towns without methadone clinics.

The nurse practitioner spends about half her time working with patients who are taking medications to prevent relapse into drug abuse. The other half of her practice is mental health care. A recent appointment with patient Bonnie Purk included a bit of both.

Purk, 43, sat in a small exam room with the nurse practitioner, who asked about her life. Purk described family struggles and other stressors she faces while trying to abstain from abusing painkillers.

Storjohann asked whether Purk felt hopeless. “Or are you just frustrated?”

Purk thought for a moment. “I went through a week where I was just crying,” she said, wiping her eyes with a tissue. But she said she hasn’t been seriously tempted to relapse.

Storjohann praised her persistence. “You’re riding a roller coaster,” she said. “I think you need to give yourself some grace.”

Purk knows Suboxone is not a miracle cure. She has taken the medication for years, and twice relapsed into misusing pain pills. But she has avoided a relapse since spring, and she said the medication helps.

In an interview after her monthly appointment with Storjohann, Purk said the medicine dulls cravings and blocks withdrawal symptoms. She recalled terrible night sweats, insomnia, diarrhea, and jitters she suffered when trying to stop abusing pills without taking Suboxone.

“You focus on nothing but that next fix. ‘Where am I going to get it? How am I going to take it?'” she said. “You just feel like a train wreck — like you’ll die without it.”

Patients can stay on buprenorphine for months or even years. Some skeptics contend it’s swapping one drug dependence for another, and that it should not be seen as a substitute for abstinence. But proponents say such skepticism is easing as more families see how the treatment can help people regain control over their lives.

Dr. Alison Lynch, a University of Iowa addiction medicine specialist, warned about the risks of fentanyl and buprenorphine in a recent lecture to health professionals in training.

Lynch explained that fentanyl remains in the body longer than other opioids, such as heroin. When someone with fentanyl in their system takes buprenorphine, it can cause a particularly harsh round of nausea, muscle pain, and other symptoms, she said. “It’s not dangerous. It’s just miserable,” she said, and it can discourage patients from continuing the medication.

Lynch noted drug dealers are lacing fentanyl into other drugs, so people don’t always realize they’ve taken it. “I just make the assumption that if people are using any drugs they bought on the street, it’s probably got fentanyl,” she said. Because of that, she said, she has been using smaller initial doses of buprenorphine and increasing the dosage more gradually than she used to.

Nationwide, the number of health professionals certified to prescribe buprenorphine has more than doubled in the past four years, to more than 134,000, according to the federal Substance Abuse and Mental Health Services Administration. Efforts to expand access to the treatment come as drug overdose deaths have more than doubled in the U.S. since 2015, led by overdoses of fentanyl and other opioids.

Storjohann would like to see more general clinicians seek training and certification to prescribe buprenorphine at least occasionally. For example, she said, emergency room doctors could prescribe a few days’ worth of the medication for a patient who comes to them in crisis, then refer the patient to a specialist like her. Or a patient’s primary doctor could take over the buprenorphine treatment after an addiction treatment specialist stabilizes a patient.

Dr. Neeraj Gandotra, chief medical officer of the Substance Abuse and Mental Health Services Administration, said he sees potential in expanding such arrangements, known as a “hub and spoke” model of care. Family practice providers who agree to participate would be assured that they could always send a patient back to an addiction treatment specialist if problems arose, he said.

Johnson, the Health Resources and Services Administration administrator, said states can also increase access to medication-assisted treatment by expanding their Medicaid programs, to offer health insurance coverage to more low-income adults. The federal government pays most of the cost of Medicaid expansion, but 11 states have declined to do so. That leaves more people uninsured, which means clinics are less likely to be reimbursed for treating them, she said.

Health care providers no longer are required to take special classes to obtain federal certification — called a “waiver” — to treat up to 30 patients with buprenorphine. But Lynch said even veteran health care providers could benefit from training on how to properly manage the treatment. “It’s a little daunting to start prescribing a medication that we didn’t get a lot of training about in medical school or PA school or in nursing school,” she said.

Federal officials have set up a public database of health care providers certified to offer buprenorphine treatment for addiction, but the registry lists only providers who agree to include their names. Many do not do so. In Iowa, only about a third of providers with the certification have agreed to be listed on the public registry, according to the Iowa Department of Health and Human Services.

Lynch speculated that some health care professionals want to use the medication to help current patients who need addiction treatment, but they aren’t looking to make it a major part of their practice.

Storjohann said some health care professionals believe addiction treatment would lead to frustration, because patients can repeatedly relapse. She doesn’t see it that way. “This is a field where people really want to get better,” she said. “It’s really rewarding.”