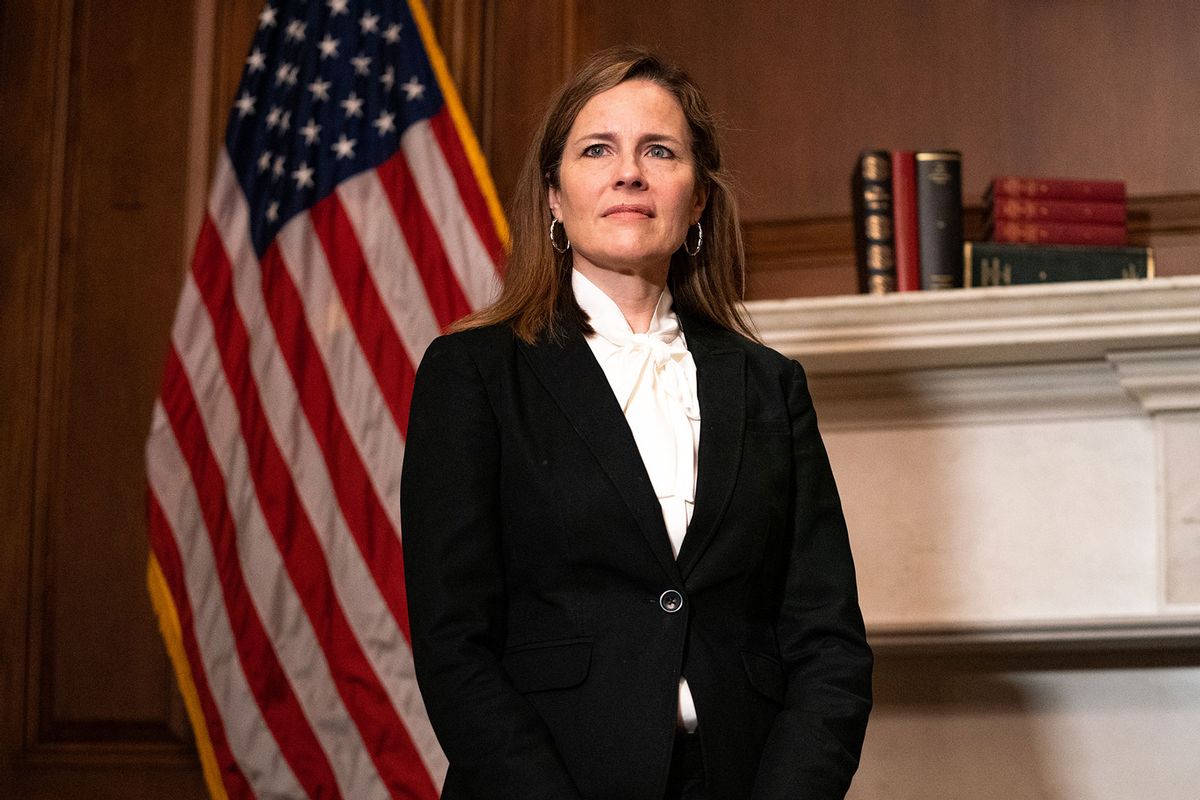 “Less abortion, more adoption. Why is that controversial?”

That was the response of Rep. Dan Crenshaw, R-Texas, to Politico’s bombshell revelation Monday night: a leaked Supreme Court majority opinion suggesting that we face the imminent reversal of Roe v. Wade.

About halfway through the 98-page opinion, which was authored by conservative Justice Samuel Alito — and which Chief Justice John Roberts acknowledged on Tuesday as genuine — came a familiar argument: that “modern developments,” including the availability of “safe-haven” laws, which allow parents to anonymously relinquish babies without legal repercussions, have rendered abortion unnecessary. The opinion noted that “a woman who puts her newborn up for adoption today has little reason to fear that the baby will not find a suitable home.”

Tucked into a footnote for that statement was a telling citation from a 2008 CDC report that found “nearly 1 million women were seeking to adopt children in 2002 (i.e., they were in demand for a child), whereas the domestic supply of infants relinquished at birth or within the first month of life and available to be adopted had become virtually nonexistent.”

As Politico noted, that passage strongly resembled the argument Justice Amy Coney Barrett made last December, when the case in question, Dobbs v. Jackson Women’s Health Organization, concerning Mississippi’s 15-week abortion ban, came before the court. During oral arguments, Barrett, who is herself an adoptive mother, suggested that the existence of safe-haven laws and adoption in general rendered moot the pro-choice argument that abortion access protects women from “forced motherhood.” Rather, she continued, “the choice, more focused, would be between, say, the ability to get an abortion at 23 weeks, or the state requiring the woman to go 15, 16 weeks more and then terminate parental rights at the conclusion.”

Critics quickly pointed out that safe-haven laws are so rarely used that in many states the number of infants relinquished through them each year can be counted in single digits. But the larger problem is more basic: the suggestion that adoption entails nothing more than several months of inconvenience before women can wash their hands of the entire ordeal profoundly fails to understand how relinquishment affects parents. After reporting on adoption issues for more than a decade, it’s clear to me that anyone who argues that adoption is a tidy solution to the abortion debate has never spoken with — or actually listened to — the people most affected by that decision.

Anyone, on any side, who argues that adoption offers a tidy solution to the abortion debate has never actually listened to the people most affected by that decision.

If you want to understand what using adoption as the solution to unplanned pregnancies looks like, you don’t need to look far. But you do need to look. There’s a long and ugly history in the U.S. of coercive and even forced adoption. From roughly 1945 to 1972 — the year before the Supreme Court’s original Roe v. Wade decision — somewhere between 1.5 million and 6 million women relinquished infants for adoption, often after being “sent away” to homes for unwed mothers, where many women faced brutal coercion, were prohibited from contact with outsiders, went through labor and gave birth in segregated sections of hospitals, and were urged to relinquish their newborns while recovering from anesthesia. Close to 80 percent of residents ended up being separated from the babies they delivered. But the fact that estimates of how many women were affected vary so widely testifies to how secretive these places were: liminal spaces where women were often forbidden from using their real names, in order to facilitate their return to society as though nothing had ever happened.

Many of the women were told they would forget about the babies and go on to live fuller lives, says Ann Fessler, author of the groundbreaking oral history, “The Girls Who Went Away.” Instead, many experienced lifelong guilt, worry, trauma and the sort of unresolved grief that family members of missing persons endure. One 1999 medical review found that women who had relinquished children for adoption had “more grief symptoms than women who have lost a child to death.”

After Roe v. Wade, the number of children relinquished for adoption began to drop precipitously. In 1972, close to 20 percent of unmarried pregnant white women relinquished their babies for adoption, but by the late 1990s, the rate had dropped to around 1 percent. (Infant relinquishment rates among never-married Black women have been statistically zero for decades.)

For some people, that steep decline in the number of American children available for adoption was a problem. The stats Alito cited in his opinion — contrasting an overly abundant “demand” for adoptable children with a “virtually nonexistent” “supply” — reveals a little-recognized truth. First, adoption is an industry driven by supply and demand, as unpalatable as those terms may sound when we’re talking about human children. Second, the reflexive liberal retort to anti-abortion rhetoric — well, those right-wingers had better be ready to adopt all those extra babies! — badly misunderstands how this particular industry works.

Even in the heyday of maternity homes, there were concerns that growing demand was outstripping the supply of the sort of babies prospective parents wanted most. In 1961, one sociologist even warned, “If the demand for adoptable babies continues to exceed the supply … then it is quite possible that, in the near future, unwed mothers will be ‘punished’ by having their children taken from them right after birth.” By the 2000s, conservative publications were publishing fretful pieces about the “Last Days of Adoption.”

Anti-abortion crisis pregnancy centers sent the message that choosing adoption was, in some cases, a chance for a woman to “prove her character by relinquishing her child.”

In response, in the mid-2000s, some anti-abortion crisis pregnancy centers began trying to deploy market research to determine what “subconscious emotional motivators” might make adoption more appealing. Two reports that emerged from that research — one bluntly titled “Birthmother, Good Mother: Her Story of Heroic Redemption” — counseled CPCs to use a common message: that single women who opted to parent their children were being selfish and immature, while choosing adoption was more mature and loving and even, in some cases, a chance for a woman to “prove her character by relinquishing her child.”

That sort of rhetoric had real effects. One mother I met was sent to a modern maternity home in Washington state when she got pregnant at 19. There she was told that choosing adoption would both please God and prove that she loved her child more than if she kept him. Isolated from her friends, family and boyfriend, she was instead encouraged to spend time with the couple who wanted to adopt her child. She came to feel like a surrogate rather than a “real” mother, and when she expressed doubts about going through with the plan, she was chastised severely. When she fell into a deep depression after relinquishing her child, the family closed what was originally intended to be an open adoption, and she wasn’t allowed to see her son again.

Another woman in North Carolina responded to an ad in the Yellow Pages offering help for unplanned pregnancies, and was quickly placed with a “shepherding family” in another state. When she went into labor, in a town hundreds of miles from her family, no one was there for her except the prospective adoptive parents, the shepherding family and an adoption agency staffer. When she said she didn’t think she could go through with the adoption, the shepherding family told her she would be on her own.

“I was never an ‘expectant mother,’ a ‘mom-to-be,’ or even ‘Carol,'” the woman told me. “I was simply one of the agency’s ‘birthmothers,’ although I hadn’t signed a thing. I felt like a breeding dog . . . a walking uterus for the agency.”

Narratives of coerced adoption can become invisible in a culture where adoption is seen as a “win-win-win,” and where Democrats try to triangulate the abortion morass by making adoption “more available.”

There are a lot of stories like this, but they’re often rendered invisible in a culture where adoption is seen as a unilateral good or a “win-win-win”; where Democrats have long sought to triangulate the abortion morass by offering, somehow, to “make adoption more available“; and where media depictions of birthmothers are often limited to seedy reality-show storylines. In a dynamic where adoptive parents are almost universally wealthier and more powerful than birthparents, even the language we use privileges one side of the story, leaving almost no neutral way to discuss the issue.

These narratives have also played out against the backdrop of a much larger phenomenon, as international adoption rates have plummeted from their peak of around 23,000 in 2004 to just over 1,600 in 2020 (the most recent year for which there is data). This has caused such a constriction in the adoption field — a market contraction, to return to the business metaphor — that numerous agencies and even a large-scale lobbying organization have been forced to close shop.

“The underlying consideration of adoption in the leaked opinion reflects the view that the decline of American infants available for adoption is inherently an adverse trend,” says sociologist Gretchen Sisson, author of the forthcoming book “Relinquished: The American Mothers Behind Infant Adoption.” Rather, she continues, “this trend reflects that more women are parenting the children to whom they give birth — which would have been the preferences of many ‘baby scoop’ era birth mothers as well.”

In researching more than 600 mothers who relinquished children from adoption, Sisson found that most had done so in the context of extreme poverty or instability. Most reported income of less than $5,000 per year, most were unemployed, and a fifth were homeless at the time they relinquished. Statistics like those cast relinquishment not as a selfless choice, or one parents can easily forget, but rather, as Sisson says, “a reflection of an American failure to not just allow people the dignity of making their own choices about their bodies and lives, but to invest in families at the most basic level.”

The reality is, Sisson says, that in general “women are not particularly interested in adoption,” but may feel forced to consider it when they cannot access abortion services or when they feel “wholly unsupported” in parenting. “This was true for ‘baby scoop’ mothers, and it is true of relinquishing mothers today.”

This is all necessary context when we hear right-wing Supreme Court justices arguing that adoption — and falling adoption rates — are part of the justification for re-criminalizing abortion. It’s also key to understanding, and rebutting, the various responses to Alito’s opinion that weaponize adoption to make a point: whether from pro-choicers trying to shame their opponents or anti-abortion advocates hopeful that adoption waitlists may get a little shorter. Neither is reckoning with what it is they’re actually calling for.

Read more from Kathryn Joyce on religion and the far right: