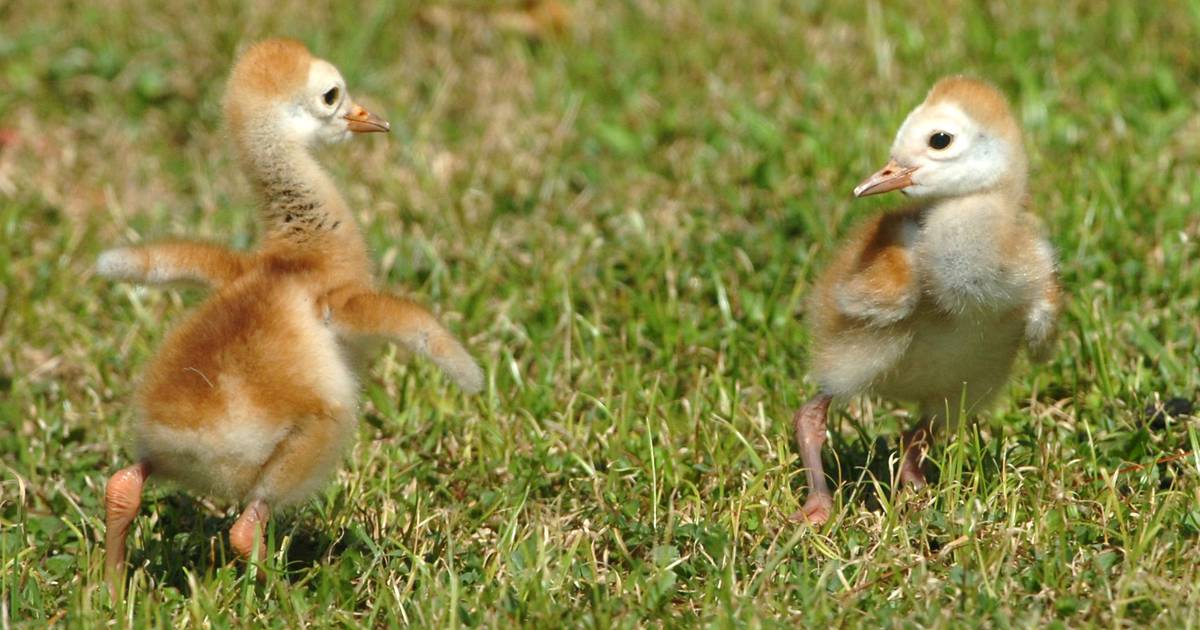 Wildlife technician Grace Budde was driving down a trail in Midewin National Tallgrass Prairie to check on some snake monitoring equipment when a sandhill crane flew 2 feet in front of her.

A trumpet sound reverberated through the air. The adult crane was doing its unique distress call, warning its offspring, known as a colt, of a potential threat.

“So, I stop and I look around, trying to find this brick-red, small sandhill crane colt. Maybe I could see it,” she said. “They blend in really well. I’m not sure — it’s a shot in the dark.

“Then I see this fuzzy little brown bird right along the trail, and I know immediately,” Budde said. “They have a very special coloration, they’re big, they have really long legs.”

This was the first confirmed sandhill crane colt sighting at the Will County prairie in Wilmington since Midewin was established in 1996, according to the U.S. Forest Service.

Though adult sandhill cranes have been regularly summering at Midewin since 2015, according to Jim Herkert, this was the first confirmation of breeding there.

“We’re like ‘OK, they should be breeding, when’s the year?’ And yeah, this is the year, so that’s a great sign,’” said Herkert, a retired ornithologist who studied birds at Midewin and the former executive director of the Illinois Audubon Society.

Wetland protection and restoration, as well as hunting regulation, has helped the species rebound in the upper Midwest, said Anne Lacy, senior manager of the North America Program at the International Crane Foundation.

“So, from those remnants — a few birds that were breeding in Michigan and Wisconsin — they have been kind of expanding out ever since,” Lacy said. “It’s very much a conservation success story. The birds that are breeding now in Illinois, very successfully, are a testament to that success.”

More sandhill cranes have started living in Illinois close to the Wisconsin border in recent years, especially in McHenry and Lake counties. Seeing sandhill crane colts is not as rare an occurrence there.

“I have a friend who works up in Lake County and I told him about it and he was like, ‘What’s the big deal? We practically trip on them up here,’” said Mike Redmer, supervisory natural resources manager at Midewin.

But to Midewin, it is a big deal. The sighting is evidence that the sandhill crane population has been expanding from northeastern Illinois into the southern part of the state, Herkert explained.

Indeed, Midewin’s size — which stretches some 18,000 acres — means the cranes could have been breeding there sooner, which Redmer said they had expected for a while, but the cranes would have been easy to miss.

Sandhill cranes can be spotted flying over the Chicago area when they migrate south toward Florida, Georgia and Tennessee in the fall and back northward in the spring — their necks stretched straight out, their 4-foot frames a gray or buff brown color against the blue sky, their calls ringing like a trumpeting sound.

“They’ll migrate over Chicago, like downtown, the Loop, in large numbers and even people that aren’t birders will look up and go ‘What is that bird?’” Herkert said.

There is something special about sandhill cranes, Lacy said. Standing tall, the cranes can almost look you in the eye. And the way pairs bond and the parental care they exhibit warm many people’s hearts.

The colt sighting at Midewin offers plenty of reasons for bird enthusiasts and experts to be hopeful.

“It’s confirmation that Midewin can provide a breeding habitat for sandhill cranes,” Budde said. “So, not only is it a good habitat for a sandhill crane to find food, but they can pair, they can get together, and then they can nest successfully.”

And despite concerns that bird populations have declined by the billions in the last decades, Herkert pointed out, the cranes’ gradual and decadeslong comeback means that efforts at conservation and restoration have been fruitful.