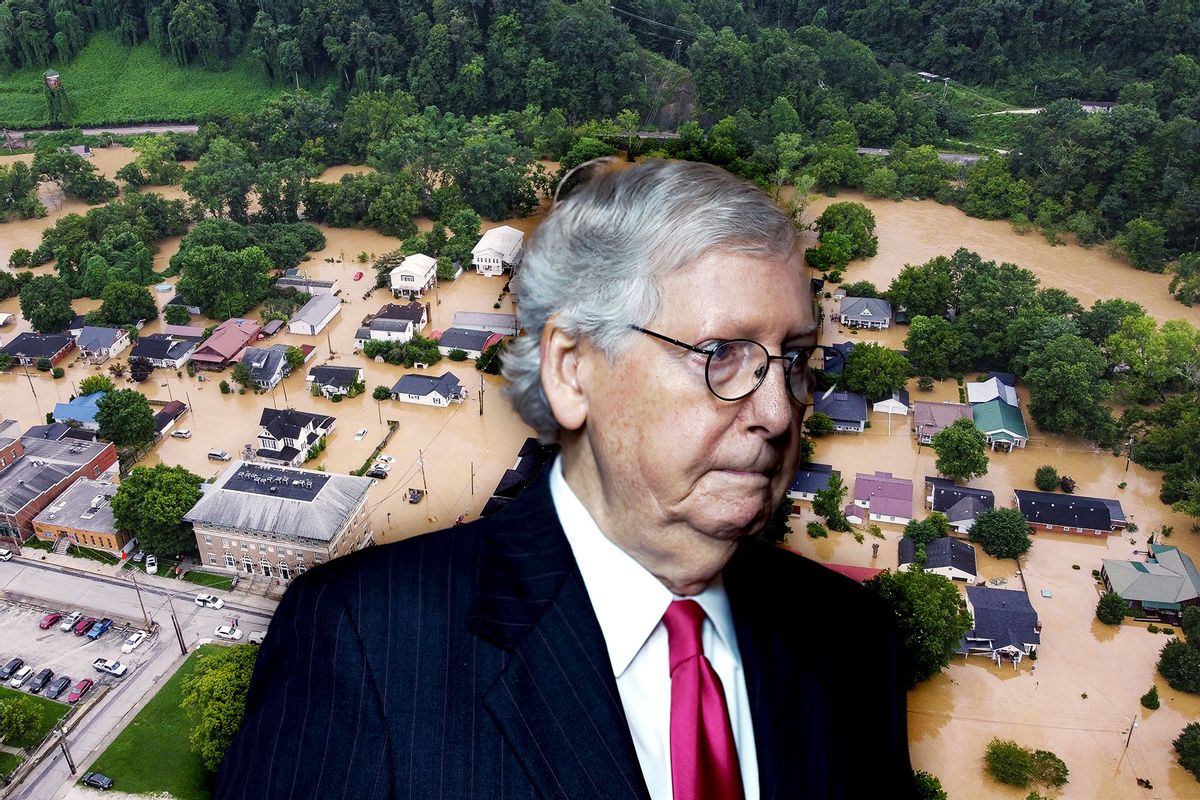 Even though the historic Democratic climate bill — coyly named the Inflation Reduction Act — has been secretly in works for months, the timing of its passing on Sunday had the air of an emergency. The hot, humid weather on the East Coast that surrounded the Senate building where the “vote-a-rama” was held was universally described as “oppressive,” with a dangerous heat index reaching into the triple digits. The feeling is made worse by the understanding that these record heats aren’t an anomaly, but the new normal for a planet that has already gained 1.1 Celsius in average temperatures and keeps getting hotter. This heat follows other apocalyptic weather events, including the horrific floods in Kentucky that have killed at least 3 dozen people.

While President Joe Biden heads to the Bluegrass State on Monday to survey the suffering caused by the floods, Senate Minority Leader Mitch McConnell thinks he knows who the real bad guys are: The Democrats who are trying to do something to slow down such catastrophic weather.

“The American people are clear about their priorities,” McConnell said in a statement insisting that Americans don’t care about the environment. “Environmental regulation is a 3% issue.” As people in his state are still burying the drowning victims, McConnell argued that what they are really worried about is “inflation, crime, and the border.”

It’s all lies and distortions, of course.

Yes, inflation is a pressing issue for Americans, but this bill, as its title indicates, is actually meant to address that. And not just in the short term, either. The long-term investments in clean energy directly address the driving engine of much of our inflation woes: the staggering cost of gasoline. More to the point, climate change is an existential issue for not just Americans, but humanity, which is why two-thirds of Americans want the government to do something about it — a number that includes more than half of Republican voters.

It’s not just that they will destroy the planet to stick it to the liberals, Republicans are even standing in the way of the kind of corporate giveaways that used to be the bread-and-butter of Republicanism.

Indeed, that even Republican voters are onboard is something of a miracle, as they’ve been subject to literal decades of propaganda portraying climate change as a hoax. Long before Donald Trump’s Big Lie or the small-but-evil lies pouring out of McConnell this weekend, the GOP was embracing disinformation as its main political strategy through false claims that climate change was made up by nefarious leftists for vaguely “socialist” purposes. It’s arguable that the GOP embrace of the noxious climate change lie started the party on the path to becoming the party of Trump, a nihilistic party wholly built on lies, which stands in opposition to basic decency often for no reason other than mindless opposition to anything that smacks of progress.

Sunday’s vote on the climate change bill was crystal clear proof of this.

What’s remarkable about the Democratic bill is that it contains few, if any, of the environmental regulations on industry that traditionally fuel Republican hostility to fighting climate change. As the New York Times analysis explains, “lawmakers replaced the sticks with carrots.” Gone are previous proposals for hard limits on carbon pollution or even strategies like a carbon tax. Instead, the bill is a giveaway to both consumers and industry, a bunch of tax credits and direct investment to get Americans to switch to clean energy. And most of the money, frankly, is going straight to business interests.

Republicans love pretending to be “pro-life,” but with this vote against the climate bill, we’re once again reminded they’ve turned into a death cult.

It cleverly illustrates just how deeply anti-progress the GOP is now. It’s not just that they will destroy the planet to stick it to the liberals, Republicans are even standing in the way of the kind of corporate giveaways that used to be the bread-and-butter of Republicanism. They are now standing in the way of their traditional support for corporate profits by voting against this bill. They would rather condemn their own children and grandchildren — as well as all the babies they wish to force on women through abortion bans — to an increasingly unliveable environment, rather than let Democrats have a political win.

The idea that the Republicans have become a “death cult” took hold during the COVID-19 pandemic, as Republicans reflexively opposed any effort to slow the spread of the virus. That wasn’t just true when the disease could only be checked by business-hurting lockdowns. Republicans also opposed efforts to vaccinate Americans, despite the fact that doing so would return the economy — and corporate profits — back to normal. Democrats wanted to end the pandemic, so Republicans ended up functionally fighting on the behalf of the virus.

As I argued in my 2018 book “Troll Nation,” hatred of Democrats has so consumed the Republican Party that they have a knee-jerk opposition to anything that Democrats care about, no matter how banal or non-controversial. Later that year, Adam Serwer of the Atlantic made a similar point in a viral essay, arguing that what binds Republicans together as a party is sadism. “The suffering of others is an adhesive that binds them to one another, and to Trump.”

The vote on the climate bill is further proof of this Republican depravity.

Every single Republican senator voted against the climate bill, and for no real reason outside of an instinctual distaste for relieving the suffering of the people they’re elected to represent. Thanks to the donor-controlled Democrat from Arizona, Sen. Kyrsten Sinema, the bill is no threat to the wealth inequalities Republicans have always defended. As environmental journalist David Roberts outlined on his podcast, the only reason this bill is expected to be effective is because it gives money to industries that already wanted to go greener anyway. There’s no real reason for Republicans to oppose this bill, outside of “sticking it to the liberals.”

It’s all very much like the Republican insistence on pushing anti-abortion laws on the public.

Voters hate abortion bans and economic projections suggest they will be a disaster not just for individuals, but for the country as a whole. Republicans don’t care, however, because their loathing of feminists has eclipsed all common sense. They’d rather destroy democracy than let voters get in the way of their sadistic intentions. That they are fighting to make the planet even more miserable for all the babies they would force on women just adds to the overall sense that what fuels Republicans nowadays is unchecked malice.

Monday morning, Judd Legum and Kyle Tharp of Popular Info published a searing expose of a shadowy group called United for Clean Power, which has been running ads claiming to oppose the climate bill from the left. Using pictures of progressive members of Congress — and falsely implying they oppose the bill — the group demanded “demand environmental justice or kill the reconciliation bill.” This all-or-nothing demand, unsurprisingly, turned out to be funded by Republican interests, masquerading as progressives, hoping they could leverage people’s desire for more climate action to keep anything from happening at all.

These ads speak deeply of how the Republican Party has become nothing but a party of trolls. They know that reducing carbon emissions is both necessary and popular. They know that their actual reasons for opposing the climate bill are utterly indefensible. So instead they turn to dishonest tactics like this, trying to sow internal fights among Democrats over whether the bill goes far enough. The hope is that people forget that, if Republicans had their way, the response to climate change would be “burn it all down.” It’s a tactic of a party that has nothing to offer but destruction and lies.

Republicans love pretending to be “pro-life,” but with this vote against the climate bill, we’re once again reminded they’ve turned into a death cult.