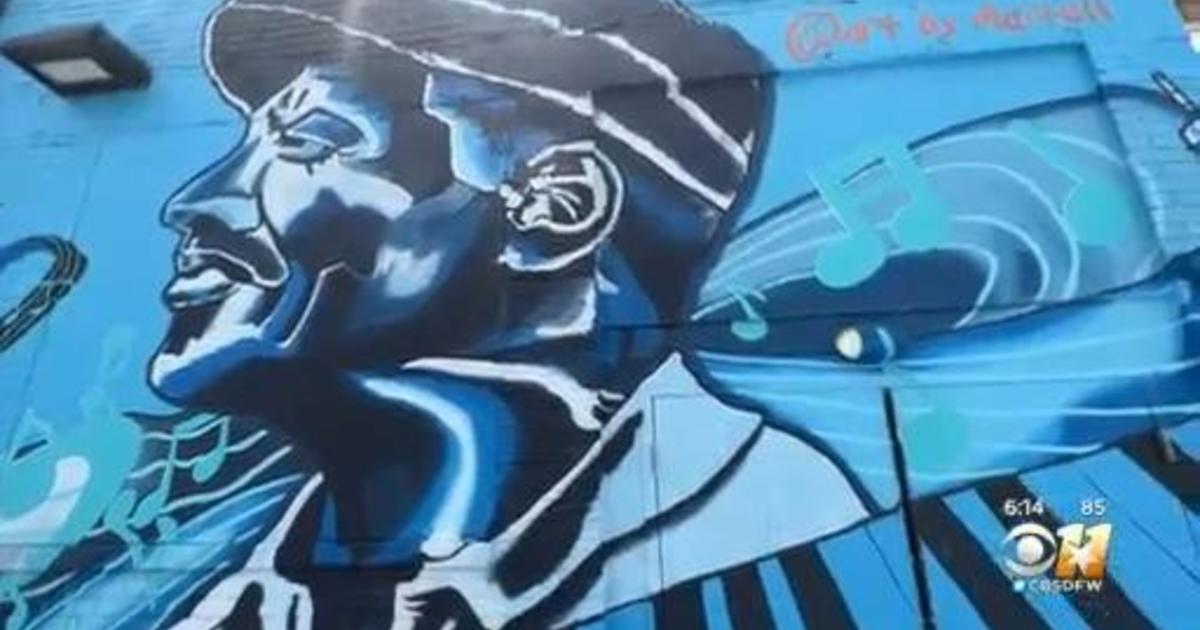 DALLAS (CBSDFW.COM) – In an area with a rich history of both music and art, an effort is underway to highlight that heritage and introduce a new generation to the past.  It’s called “Blues Alley,” stretching along Clover between Henry and Crowdus Streets.

One might call it a fresh coat of paint for Deep Ellum.

So when the Deep Ellum Foundation invited artists to turn shades of blue into a mural tribute, he was immediately on board.

“It just makes me feel the joy that I can like put smiles on people’s faces,” said Holloway. “Especially with my art.”

There’s a reason the effort is called Blues Alley; it’s a deliberate nod to the area’s rich musical history.

“That was really the inspiration and the idea behind Blues Alley,” said Dee Ellum Foundation Executive Director Stephanie Keller Hudiburg. “This parallel between the buskers and the musicians of 100 years ago, that really made the district dynamic, and the artists of today who make it continuously that creative hub.”

Splattered with blue paint and still perched on a ladder, Steve Hunter’s mural is still a work in progress.

“I mean, everybody thinks of Stevie Ray Vaughan and all the bigger names, blues artists from Dallas. But hardly anybody’s ever heard of Willard Robison. You know, he sung this song 100 years ago and it’s pretty cool to get to paint a mural that brings awareness to this guy.”

Roughly 26 murals are complete and another six to 10 are in the works for this year.  And thanks to the support of local businesses and a grant from the Texas Commission on the Arts, organizers say visitors can look forward to what’s called an “immersive blues experience.”

“We are going to have dynamic lighting,” said Hudiburg.  “We want to paint the street blue so that you’ll be able to literally walk down and immerse yourself in Deep Ellum’s blues history. We also have our distillery and our brewery and our wonderful businesses that surround Blues Alley that are planning to have block parties and planning to have music and all those wonderful things that people come to Deep Ellum to experience right here in Blues Alley.”

The project has been in the works for roughly a decade and the excitement adds to the already vibrant Deep Ellum buzz.

“To see it come to life is really a dream come true for many of our artists and for us at the Deep Ellum foundation because this is a true community driven project. It’s about showcasing the homegrown talent that has long been here in Deep Ellum, but is also continuing to grow in Deep Ellum, every single day as new artists come and make their way as part of this creative community.”

A community that thrives through both the energy of art, and heart.

Holloway says it was this project that finally convinced him that he was in fact, an artist.  A skill he says he crafted on Saturday mornings watching cartoons and then drawing with his Dad.

“My Dad passing on this blessing to me, my family’s supporting me… making them proud makes this special, makes this moment special.”

Robbie grew up in northeast Texas, in a tiny town where her family’s history spans six generations.