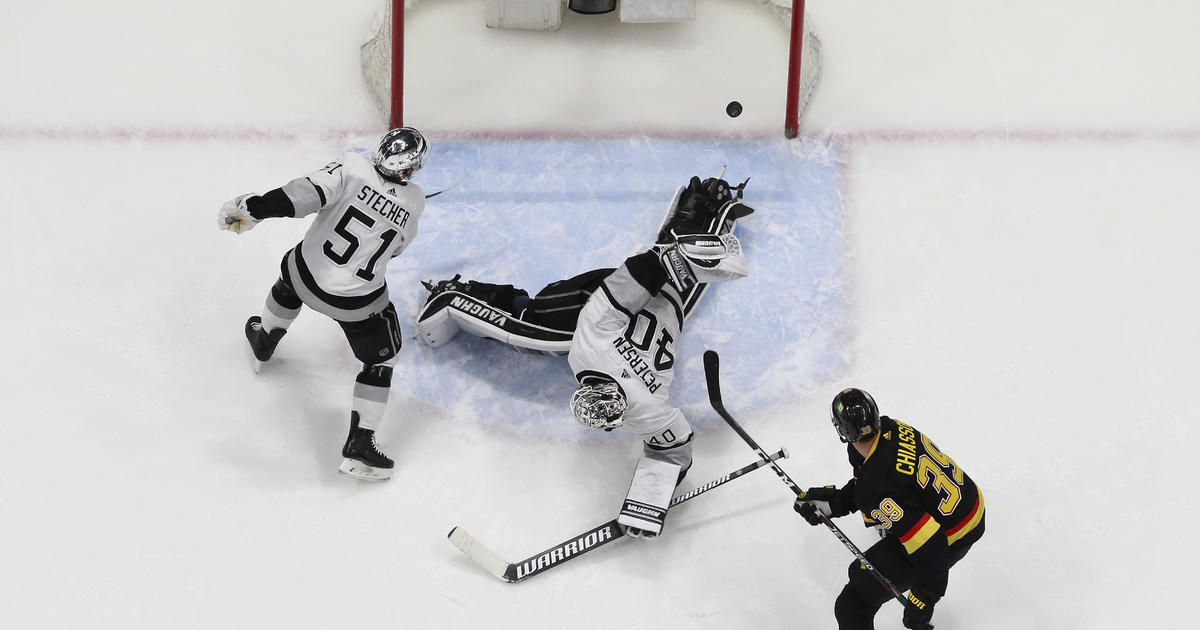 Brock Boeser scored his second goal of the game with 29.7 seconds left in overtime, giving the Vancouver Canucks a 3-2 win over the Los Angeles Kings on Thursday night.

The Kings (44-27-11) dominated through much of the game, taking a 2-0 lead into the third period on goals by Adrian Kempe and Gabriel Vilardi.

The Canucks (40-30-11) rallied in the third with goals by Boeser and Alex Chiasson.

“For us to come and play a team that’s in the playoffs, we take a lot of pride in that. And it still meant a lot to a lot of us and just to show what our team’s capable of,” Boeser said.

“It’s pretty amazing where we are right now compared to where we were at the beginning of the year, and I think we all talked about that a lot. And we take a lot of pride in that.”

Vancouver, playing its final home game of the season, got a 33-save effort from Spencer Martin. The Kings’ Cal Petersen had 26 saves.

Vancouver pressed in the dying seconds of overtime, throwing several shots at Petersen before Boeser took a rebound at the top of the crease and fired it in for his 23rd goal of the season.

The Canucks are 32-15-9 under coach Bruce Boudreau.

“I just haven’t seen any quit in them,” Boudreau said. “I mean, we’ve had a couple of bad games where we’ve had goals scored on us in the first period, and we haven’t looked very good, but those have been few and far between.

Martin made a pair of dazzling saves about two minutes into overtime, first stymying Blake Lizotte on a two-on-one, then scooping up a backhanded shot from Andreas Anthanasiou moments later.

Vancouver came into the third period down 2-0.

Chiasson scored the equalizer 14:31 into the final period, backhanding a bouncing rebound from a Quinn Hughes shot. The puck appeared to hit the stick of defenseman Troy Stecher before sailing up and over Petersen into the back of the net.

A power-play goal got the Canucks on the board after Carl Grundstrom was called for hooking midway through the third.

Boeser fired a one-timer from the top of the slot 6:52 into the frame, cutting the deficit to 2-1. Elias Pettersson registered an assist on the play for his 67th point of the season, a career high.

The Kings took a 2-0 lead late in the second after Kempe beat defenseman Travis Dermott in a race to the Vancouver net and slid a shot under Martin’s pad. The goal was Kempe’s 35th of the season.

Boeser nearly evened the score moments earlier off a two-on-one.

Elias Pettersson and Boeser sprinted into the L.A. zone with Pettersson controlling the puck. He slipped a pass to Boeser across the slot and the right-winger unleashed a quick wrist shot from in close. Petersen dove across the crease and got his blocker in the puck’s path just in time.

Vilardi opened the scoring 15:08 into the second with a shot from above the faceoff circle that sailed through traffic and beat Martin on his glove side.

The Kings dominated the game even before finding the back of the net, outshooting Vancouver 23-8 halfway through the second period.

Martin kept Vancouver in the game with a series of solid saves, even after he lost his stick for an extended period. The stick was knocked out of his hand midway through the second when a blast from Athanasiou went off the shaft, sending the stick flying into the corner.

The Canucks goalie also weathered six minutes of penalty time in the first.

NOTES: The Canucks announced their team awards Thursday, with MVP honors going to All-Star goalie Thatcher Demko. Demko missed a second game with an undisclosed injury. … Kings forward Dustin Brown wore the ‘C’ usually reserved for Adrian Kempe after announcing earlier on Thursday that he will retire at the end of the Kings’ playoff run.