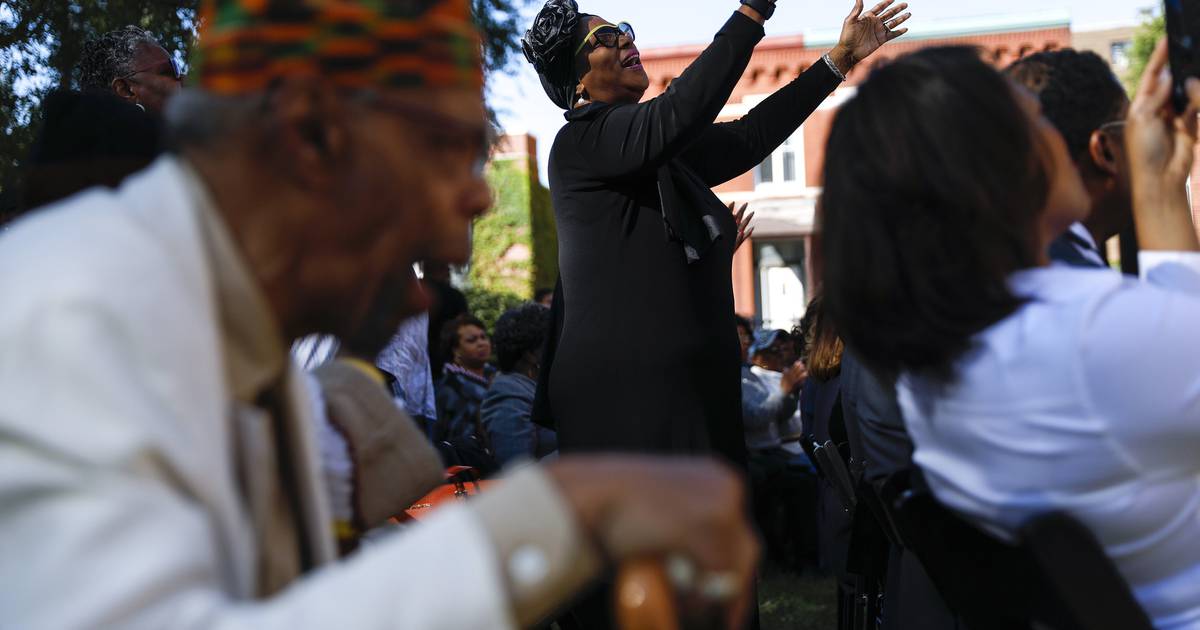 The National Museum of Gospel Music is one step closer to becoming a reality. And it will be in Bronzeville.

State Sen. Mattie Hunter helped secure $2.1 million in funding toward a $37.2 million plan to rebuild the former home of the Pilgrim Baptist Church and create the National Museum of Gospel Music.

Plans for transforming the former church building began in 2017. The church’s 45,000-square-foot space is slated to house multigenerational programming and educational exhibits, and auditorium seating up to 350 visitors , an exclusive video archives collection of the Stellar Gospel Music Awards, a listening and research library, a cafe, retail store and rental facilities for special events, according to the museum’s website.

“It’s one of the biggest contributions we’ve gotten from the state,” said Cynthia M. Jones , chairman of the board of trustees at Pilgrim Baptist Church.

Jones has been involved with the church for 66 years . It was the place she said her earliest memories were formed.

“When I was growing up in Pilgrim, we had about 2,000 or 3,000 members,” Jones said. ” If you didn’t get there by 10 o’clock, you couldn’t get in the church because there would be people sitting on the stairs.”

Jones said her home church was beautiful. . On the outside, limestone walls and stained glass windows. On the inside, two floor levels, two balconies, a decorated sanctuary, and a roof with strong acoustics that echoed the words of sermons and lyrics of songs, most notably “Precious Lord, Take My Hand,” by Thomas A. Dorsey.

In 2001, Jones said she was made the chairman of the restoration committee for the church to try to raise money for repairs. But five years later, in January of 2006, while roof repairs were underway, Pilgrim Baptist Church caught fire, burning down most of the 115-year-old historical landmark.

All that remains now are limestone walls and milestone memories.

Shermann “Dilla” Thomas, a Chicago historian said that in 1915, roughly 15 congregants or fewer gathered at Pilgrim Baptist Church, a worship space that was once a synagogue.

“It started out as kind of a Bible club,” Thomas said.

By 1920, according to Thomas, the Black population in Chicago grew to about 900,000. As the population grew, so did the number of worshippers.

Then, the gospel music genre was born.

“Dorsey has written what was like a poem or an open letter to his wife who he lost in childbirth,” Thomas said. “Mahalia Jackson sang the words to that poem.”

Those words were the lyrics to “Take My Hand, Precious Lord.”

“We lost a Chicago institution,” Thomas said of the 2006 fire that damaged Pilgrim Baptist Church. “All fires, like the Chicago Fire of 1871 and the fire that just occurred in Englewood leave such an emotional and devastating feeling after seeing the ruins of something that is hard to get back to.”

After the fire, the number of congregants dropped. The church administration center and day care were used to hold services, according to Thomas. There was not enough space to hold the same number of worshippers as in the main church building.

In 2006, several Chicago Housing Authority housing complexes in Bronzeville including Ida B. Wells, Stateway Gardens and Robert Taylor were in the process of being demolished, according to Thomas.

“Many of those residents attended that church as well,” Thomas said. “That’s also going to shrink the church’s ability to rebuild the church and (replenish) the number of people who attend.”

Today, the church has roughly 150 congregants , according to Jones. The exterior of Pilgrim Baptist Church is scaffolding, the remaining limestone walls and several artifacts.

“Even in the state that it’s in with the ruined walls, we still have people all over the world to see that church,” Jones said. “Last year, two men from Paris even sang in our choir from October to December.”

Other visitors have come from as far as Germany and Japan, according to Jones. She is confident that visitors from across the globe will continue to come, especially when the National Museum of Gospel Music opens.

“With the Gospel Museum there, and the first one in the world I expect it is going to be the same way, “Jones said. “That’s the birthplace of gospel music.”