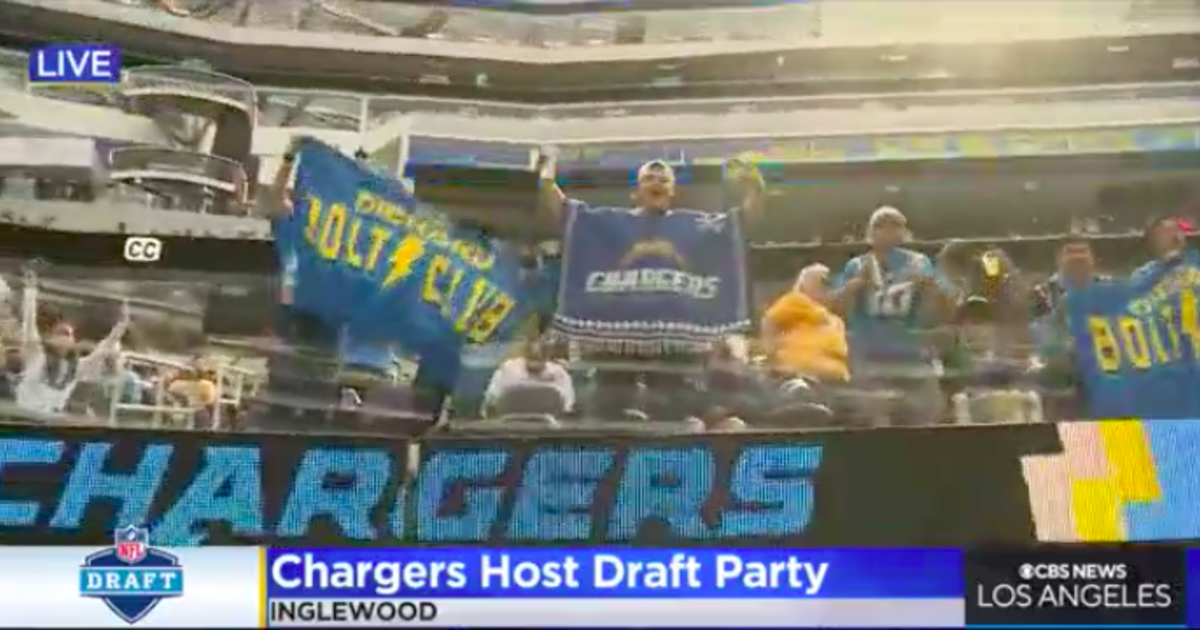 The Los Angeles Chargers hosted thousands of fans at their home field in Inglewood Thursday evening, celebrating what many view as the official beginning to the upcoming season – the NFL Draft.

With the 17th pick of the first round, fans had to wait for a little over an hour of actual draft time for the team to make the selection, but that didn’t stop them from filling the seats early to watch as their beloved Bolts added one new piece to their 2022-23 roster.

Fans at DraftFest were treated to a livestream of the NFL Draft, which was held in Las Vegas.

CBS reporters were on the field, where they spoke with some of the fans in attendance, who were excited about “the prospect of what the future could look like.”

Snoop Dogg also made an appearance in front of the hometown crowd, who were treated to a performance by the legendary Los Angeles based rapper.

“We’re in the City of Inglewood – we love football,” Snoop said, explaining why he decided to join the team for the party. “Keenan is a family member. They’ve been good to me and my football league. It made sense for me to walk down the streets, come up here and get this pre-draft party cranking.”

Allen echoed that, noting how with the team recently relocating to the new city, they have to continue building their new fan base however they can.

“It’s an awesome moment for all these guys that are about to get drafted,” Herbert said. “I think back to two years ago when I got drafted to the Chargers, and I couldn’t have been more happy to be part of the organization. I’m so thankful that it’s worked out so far. Excited to see who we take.”

The Jacksonville Jaguars were first on the clock, where they took almost all of their 10 minutes allotted for selection to pick George linebacker Travon Walker.

It’s the second-straight year that the Chargers have taken an offensive lineman with their first round pick, after selecting Second-Team All-Pro offensive tackle Rashawn Slater with their No. 13 pick.

The move falls right in line with what most NFL analysts expected, as the Bolts addressed the need to bolster the protection in front of Herbert.

USC wide receiver Drake London was also selected with the 8th pick by the Atlanta Falcons.

The crosstown rivals and reigning Super Bowl champion Los Angeles Rams, who notably share the stadium with the Chargers, did not have a pick in the first round, after trading it to the Detroit Lions as a part of the move that landed Matthew Stafford in Los Angeles.