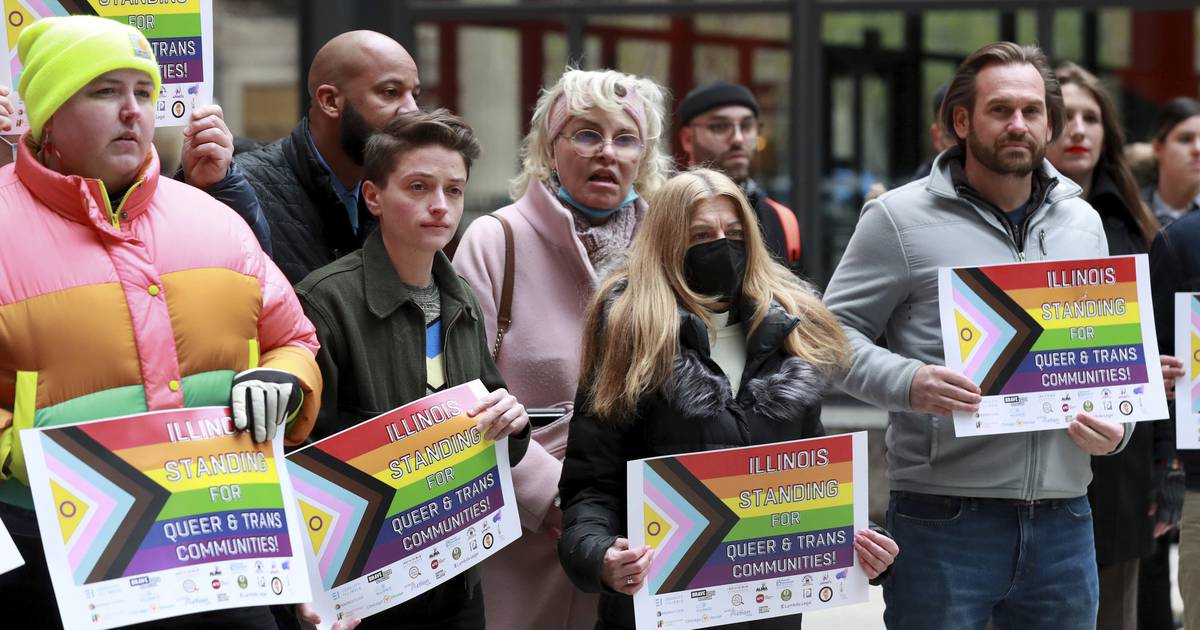 In March, their rally for LGBTQ rights was cut short after bullhorn-wielding counterprotesters crashed the event.

But on Wednesday the Illinois Standing for Queer & Trans Communities rally returned, with organizers saying they would not be silenced.

Speakers, including Illinois Gov. J.B. Pritzker and Lt. Gov. Juliana Stratton, decried a wave of anti-LGBTQ bills introduced across the country in recent months and called attention to issues in Illinois, including the deaths of two Black transgender women in March.

“I’m here today because I will not be silenced, because I stand with you,” Pritzker told 120 people at Federal Plaza in the Loop. “Because we have so much that we need to stand up for, to protect, to fight for.”

The Illinois bills include HB 4082, which would prohibit transgender girls from playing on competitive girls sports teams at their schools, and HB 5349, which would require parents to opt in to sex education. Currently, sexual education is provided unless parents opt out.

Neither of the two Illinois bills has advanced far in the state legislature.

“We are here to reclaim our space and our voice and to send a loud, strong and visible signal that we will not be silenced,” said Ruiz-Velasco.

In March, an NBC News analysis found that 238 state bills seeking to limit LGBTQ rights had been proposed this year, up from just 41 in 2018.

Speakers at the rally called attention to violence and discrimination against transgender Americans, particularly women of color. Two Black transgender women were found dead in the Chicago area last month: Evanston LGBTQ activist Elise Malary, whose body was found in Lake Michigan on March 17, and Chicagoan Tatiana “Tee Tee” Whetstone, 33, who was found dead in a garbage bin March 18. Whetstone’s death was ruled a homicide.

The rally, hosted by more than 20 organizations, including Equality Illinois, was originally planned for March 28. But organizers said they had to halt the original rally due to safety concerns after “aggressive” disruptions by loud counterprotesters including yelling and pushing through the crowd.