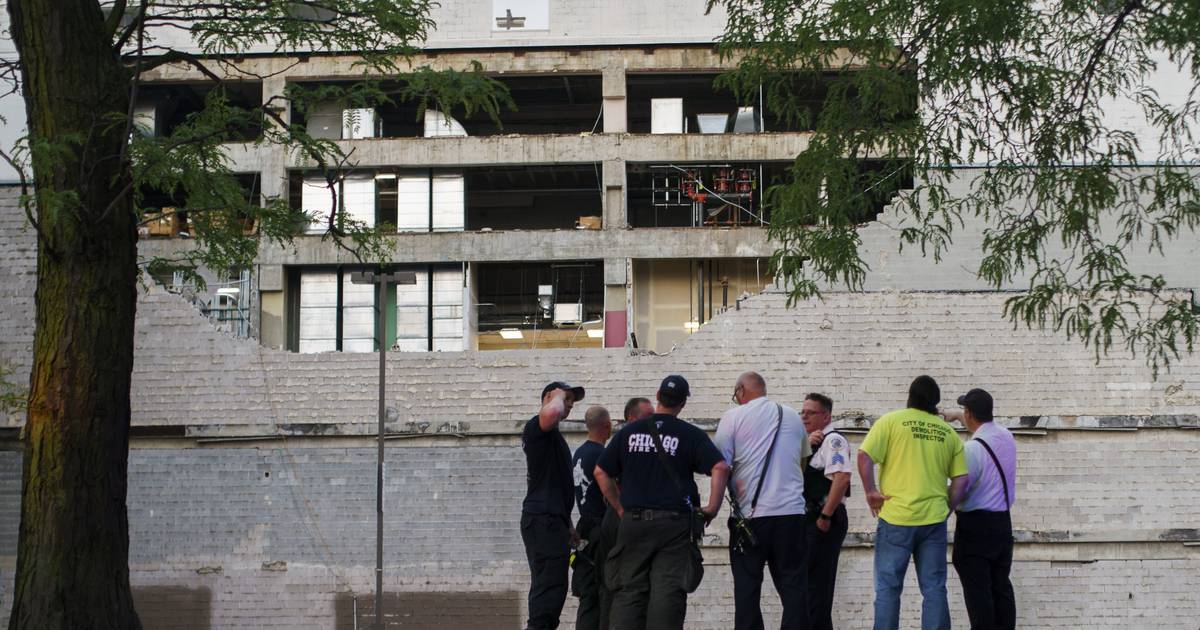 The severe supercell thunderstorm that tore through Chicagoland Monday night toppled planes, ripped the roof off at least one apartment building, dropped hail as large as 1.5 inches in diameter and left tens of thousands without power in its wake.

As of 7:35 a.m. Tuesday there were 745 active Commonwealth Edison outages, affecting nearly 40,000 customers and as many as 4 million users, according to the ComEd outage map. An hour later, around 8:35 a.m. the number of outages actually increased to 788, despite ComEd crews working around the clock to restore power to affected areas.

“It sounds like there’s widespread tree damage, a lot of power outages from power lines coming down,” said Casey Sullivan, a meteorologist with the National Weather Service. The storm formed east of Rockford before moving through Kane, McHenry and eventually Cook County and on into northwest Indiana, he said.

In Cook County, 84 mph winds gusted at O’Hare International Airport. That was strong enough to turn over numerous planes at Schaumburg Regional Airport around 6:25 p.m.

Near Elk Grove Village around 6:30 p.m., roofing material started flying off an industrial building. The entire roof of a three-story apartment building was ripped off near Maywood around 6:50 p.m.

The system reached the Lake Michigan shoreline near downtown Chicago around 6:45 p.m., with “several tree branches downed just northwest of Montrose Harbor,” the weather service reported. Wind speeds of 64 knots were reported a few miles from Navy Pier and a buoy station near Calumet Harbor clocked wind speeds of 54 mph.

Metra reported entire trees blocked the BNSF railroad in Brookfield, between the Congress Park and Riverside stations around 7 p.m. Metra BNSF said certain trains would not operate Tuesday as a result of the storm system, including 1224, 1221, 1254 and 1242, according to a post on social media.

Ten minutes later, the wall of a parking garage in Lincoln Park was “blown out,” according to storm damage reports shared by the National Weather Service, which attempted to collect damage reports from the supercell storm system that moved approximately 100 miles from Kane and McHenry counties to northwest Indiana Monday night.

And by 7:53 p.m. a tree fell on and destroyed a home in Porter County, Indiana. Reports of hail throughout the area came in as large as 1.5 inches in diameter, according to trained weather spotters.

The Brookfield Zoo said it would delay opening until 1 p.m. after strong wind scattered debris and felled trees throughout the park.

“We received significant damage to our grounds due to last night’s storm. We will be clearing downed trees and pathways and assessing the extensive damage this morning,” according to a statement from the zoo.

The weather service said no injuries had been reported from the storm, but meteorologists continued collecting damage reports early Tuesday.

“People are just waking up this morning to see how bad the damage is, and we’re going to be sending out a survey team to see if any of the damage is tornadic. We’re still piecing it together ourselves here,” Sullivan said.

Radar data indicated a tornado was possible, but the weather service had not yet received any reports that one occurred, he said.

Tuesday’s cleanup efforts could be stalled by additional weather woes — but this time, the trouble will be the temperature.

Most of northern Illinois will remain under a heat advisory through at least 8 p.m. Wednesday, according to the weather service. Cooling centers are to operate out of the city’s six community service centers, according to the Office of Emergency Management. Heat indicies reflecting the “feels like” temp, could top 105 degrees and long-standing high temperature records will be threatened.

For more weather news visit the Tribune’s weather page and check back for updates.