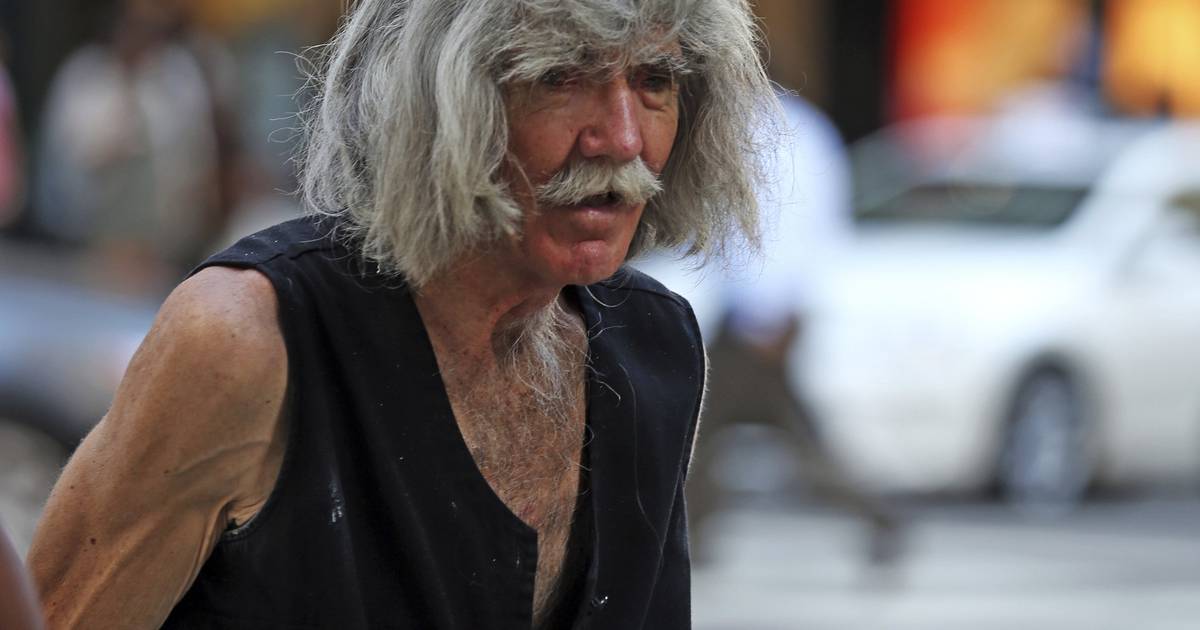 Joseph Kromelis, a fixture well known in downtown Chicago streets as “Walking Man,” has died months after he was set on fire in May while sleeping on the street.

According to the Cook County medical examiner’s office, Kromelis, 75, died Sunday evening from complications of thermal injuries. The office, which classified the death as a homicide, said Kromelis had been hospitalized since his attack.

Kromelis, recognized by his long, wavy white hair, mustache and signature coat, was sleeping under blankets on the 400 block of North Lower Wabash Avenue when police said 27-year-old Joseph Guardia doused Kromelis in gasoline and set him on fire. Severe burns sustained from the attack covered more than half of his body.

By late June, Kromelis appeared to be recovering faster than authorities initially expected, improving his condition from critical to serious.

Guardia told Cook County authorities that he attacked Kromelis because he’s an “angry person,” providing no other motive. Guardia was captured on surveillance footage standing silently over Kromelis’ body for 16 seconds. He then walked to a nearby intersection and returned to pour gasoline over Kromelis’ head, authorities said. Kromelis’ upper body went up in flames.

Guardia is charged with attempted murder and arson. He is being held without bond in Cook County Jail, according to court records, and is due back in court for a hearing Jan. 19.

The attack was the second that the “Walking Man” had suffered in six years. In 2016, Kromelis was beaten by an individual carrying a baseball bat. The attack left him hospitalized for several weeks.

In response, community members rallied around the local celebrity and raised more than $33,000 on a GoFundMe page in support of his recovery. At least two GoFundMe campaigns were created in the wake of the May 25 attack, with each raising about $5,000 for Kromelis.

Janice Riggs, a longtime downtown resident who organized the fundraiser after the bat attack, said Kromelis was a constant, comforting presence in the neighborhood.

“You knew something was wrong if you didn’t see him every few days,” she said. “He was just part of Chicago.”

Though she had numerous brief conversations with him over the years, she said, she didn’t know him well. His sister-in-law, Linda Kromelis, told the Tribune in 2016 that after his parents moved to Michigan in the 1960s, he stayed behind in Chicago, resisting the family’s entreaties to move, even after he lost his apartment.

“It’s just his way of life,” she said. “He liked the city, liked walking, liked selling jewelry on the street. There’s nothing wrong with him. But we worried about him.”

She said all but one of Kromelis’ siblings had died. The Tribune was unable to reach a relative Monday.

Riggs said she was left with “bottomless sadness” after Kromelis’s death.

“He had such a rough life in such a beautiful city,” she said. “I don’t think a lot of people knew him well, but a lot of people recognized him. It was just a bright spot in your day when you saw him. I hope he’s in a much more comfortable and warmer place where his merits will be seen and he’ll be safe, comfortable and loved.”