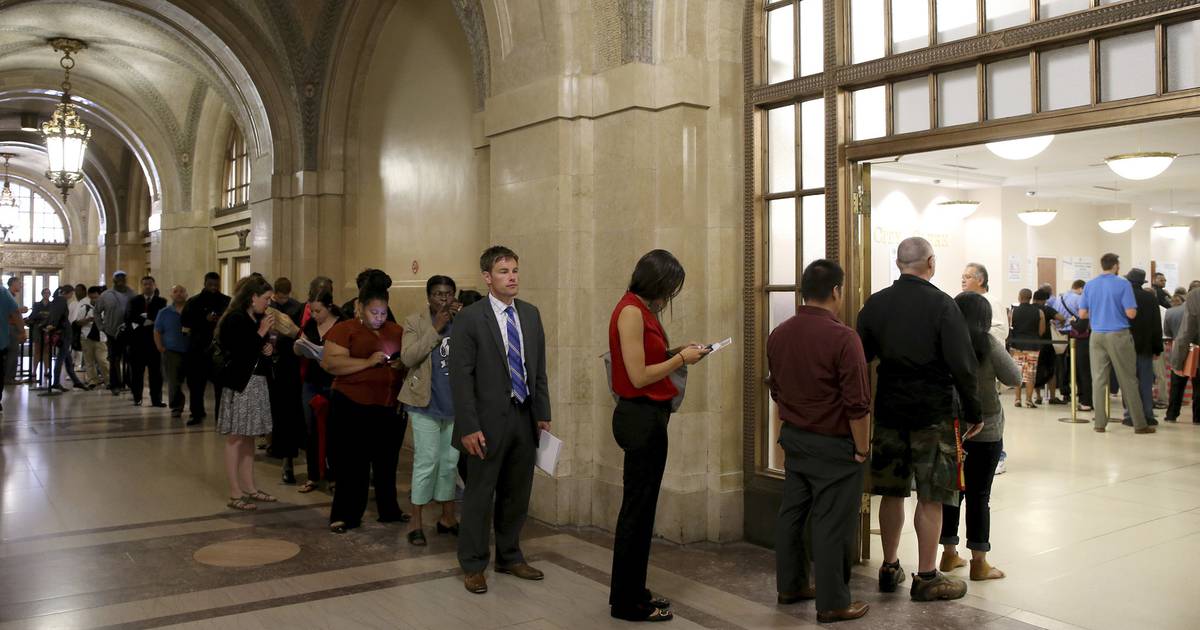 An Illinois appellate court ruled Friday that the city of Chicago unlawfully overcharged some residents who were ticketed for failing to have a vehicle sticker, which one car owner said led him to declare bankruptcy after he racked up thousands of dollars in fines.

Attorney Jacie Zolna, who represents three residents in a lawsuit that led to the ruling, said the decision sets the stage for a possible class-action lawsuit that could see hundreds of millions of dollars in ticket debt come under scrutiny.

“The current mayor has admitted that the city is addicted to ticketing revenue, and that they use tickets to bolster their budget,” he said. “The problem is that it’s at the expense of our most vulnerable citizens.”

Vehicle stickers are at the heart of the case. The city charges $95 annually for a passenger car sticker, with the money going toward road maintenance. Failing to display a sticker can mean a ticket.

State law sets the maximum penalty for such an offense at $250, but city attorneys argued that was “a drafting error” in the vehicle code, according to the appellate court ruling. They said the legislature intended the true ceiling to be $500 and the city charged accordingly, with a $200 ticket bringing an additional $200 fine if not paid within 25 days.

Zolna said that in some cases, the city also piled one ticket on top of another for the same violation, leading some residents to incur massive penalties.

Rodney Shelton, who lives in West Humboldt Park, said that’s what happened to him. Speaking at a news conference at Zolna’s office, he said a car he bought couldn’t pass the emissions test, and without that he couldn’t buy a city vehicle sticker.

Even though he parked the car in a private lot, he said, the city ticketed him dozens of times for not having the sticker until the fees and penalties reached about $20,000. He had to declare bankruptcy before he could start paying it back, he said.

“I look at it as the city being predators on the taxpayers,” he said.

A spokeswoman for the city’s Law Department did not immediately comment on the specifics of the appellate ruling.

“The Law Department is reviewing the opinion,” she said.

Mayor Lori Lightfoot campaigned against the city’s system of fines and fees, frequently criticizing the city for balancing its budget on the backs of taxpayers by exacting regressive penalties through tickets.

Within months of taking office in 2019, the mayor shepherded through the City Council a series of reforms to the city’s fines-and-fees system that ended the practice of suspending the driver’s licenses of people who haven’t paid parking tickets, reduced vehicle sticker penalties and created a six-month payment plan to give those with ticket debt more time to pay.

In 2020, however, Lightfoot pushed for the city to use speed cameras to ticket drivers going just 6 miles over the limit, drawing criticism that the city is continuing with unfair practices under her administration.

Bucktown resident Kyle Garchar, a plaintiff in the vehicle sticker case, said he was caught in a downward spiral after getting three of the tickets within a month.

He said he was unable to pay the fines, which with late charges came to $1,200, and thus was prevented from working as a ride-share driver. The companies have a deal with City Hall to bar people with tickets from driving unless they’re in a repayment plan, he said.

“It was just one thing after another,” he said. “It’s pretty insane to me that they’re able to levy that much in tickets in such a short amount of time with little to no recourse.”

He said he finally got in a repayment plan but is still paying it off four years later.

Chicago in 2019 changed its municipal code to make the late fee for a sticker violation $50, which keeps the total cost of the ticket at the $250 limit set by the state. Even so, city attorneys fighting the lawsuit pointed to a section of state law they said reflects the legislature’s true intent to set a $500 limit.

The three-judge 1st District appellate court panel disagreed, saying the higher penalty is specified only for a few offenses, and that sticker violations aren’t one of them. It sent the case back to Cook County Circuit Court for further litigation.

Zolna said he’s trying to secure refunds for people who paid excess fines and get their ticket-related debt wiped off the books, but he predicted the city would fight ferociously to preserve the status quo.

“They’re not going to do anything to change,” he said. “They’re going to hire an army of lawyers funded by the taxpayers to try to fight tooth and nail to keep their golden goose, which is … ticketing poor people and putting them into bankruptcy.”