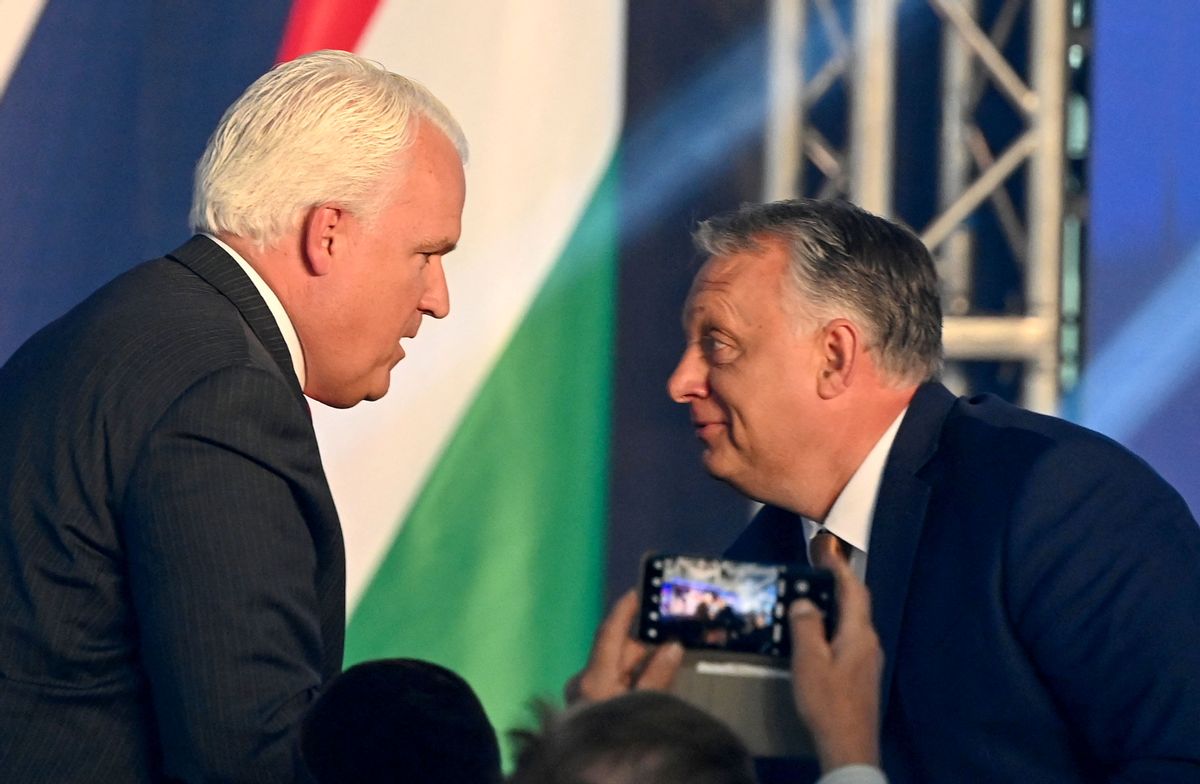 The second day of CPAC Hungary was marked by vitriolic denunciations of immigration, declarations that leftists are seeking to eradicate “white Western nations” and that mass migration is being used as a “weapon of mass destruction” worse than a nuclear bomb. Less than a week after a mass killing in Buffalo motivated largely by the racist “replacement theory,” speakers at CPAC didn’t shy away from reiterating its key argument: There is a concerted effort underway to “replace” the white majorities of countries in Europe, North America and elsewhere with nonwhite immigrants.

Already in the lead-up to the conference, which concluded Friday evening in Budapest, Hungarian Prime Minister Viktor Orbán had doubled down on his frequent invocation of replacement theory, which in Hungary is effectively treated as a matter of state policy. In a speech last Monday, as he was sworn into his fourth consecutive term in office, the Guardian reported, Orbán charged that “the great European population exchange [is] a suicidal attempt to replace the lack of European, Christian children with adults from other civilizations — migrants.”

RELATED: What “great replacement”? Right wants us to shut up about Buffalo shooter’s ideology

Over the last two days of CPAC Hungary, speakers repeatedly made similar arguments. On Friday, Ernő Schaller-Baross, a member of the European Parliament from Hungary’s ruling Fidesz party, said that the European refugee crisis of 2015 — which he described as “illegal migrants” coming to “Europe for hope of a better way of living” — had been welcomed by many Western European nations “as a cure for a degrading population.” By contrast, he said, Hungary’s “conservative approach” of believing that “the sovereign nation has the right to decide with whom they want to live within its thousand-year-old borders,” had been attacked.

Vincenzo Sofo, another member of the European Parliament, from Italy’s “post-fascist” Fratelli d’Italia party, spoke of the “need to protect the independence of European nations” from “mass immigrations and ideological immigrations as well and military immigration and invasion as well. We conservatives need to show that we have always been standing and we need to continue to stand because we are the last chance of Europe so we cannot allow it to fail.”

Georgia Meloni, leader of the “Brothers of Italy” party, which has run descendants of fascist dictator Benito Mussolini as candidates, also addressed the conference via video, saying that once the war in Ukraine concludes, conservatives should unite internationally to destroy the “woke ideology” that has damaged Europe.

Another Italian speaker, Lorenzo Fontana, a legislator from Italy’s right-wing populist Lega party (and author of the 2018 book, “The Empty Cradle of Civilization,” about Italian demographic decline), said, “I think that the end of the ideological system of political correctness uses immigration to try to create a new population. Because they don’t want [Europeans to] have a strong identity and strong tradition, because when you have a strong tradition and strong identity it’s difficult for the population to be controlled.”

The most vitriolic arguments, however, came not from European speakers but their American peers. David Azerrad, a professor at Hillsdale College in Michigan, a Christian institution that has become a major influence in U.S. conservatives’ fight against public education, described immigration as a tyrannical means of breaking a country’s will. “There is simply no precedent in human history for sovereign states voluntarily importing into their homelands untold millions of peoples of different colors, creeds and cultures for decades on end,” he said. “This is what tyrants do to conquer a broken people, to pacify them. It is not something that the natives willfully do to themselves.”

Azerrad argued that the only people “dumb enough to believe” that immigration and multiculturalism had improved Western nations were libertarians eager to exploit cheap immigrant labor and sell to immigrant markets, “cosmopolitans” who like to eat foreign food, and “militant leftists who jubilate at the thought of eradicating white western nations.” The “leftists,” he said, were not quite as “dumb as the first two because they know exactly what the net effect of this immigration will be: it will be to fundamentally transform these nations.” He compared various European capitals with Hungary’s, in the wake of Orbán’s crackdown on immigration: the result, he said, is that “today Paris and London are unrecognizable; Budapest is not.”

RELATED: How this tiny Christian college is driving the right’s nationwide war against public schools

Talk of the ethnic or cultural “transformation” of countries through large-scale immigration is a commonplace euphemism for replacement theory claims. But Azerrad also spoke more bluntly. “One of the greatest victories of the left,” he said, was “to have convinced so many of us that these [immigration] policies can’t be changed. That history is on their side and that we should resign ourselves to become minorities in our own countries.”

Relegating white people to minority status, Azerrad said, was exactly what the “ruling class” intended. After World War II, he said, those elites had learned “one lesson”: that expressions of nationalism in white Western nations must inevitably lead to Nazism. “If a white Western nation turns to nationalism, if it has the temerity to understand itself for what it is — a particular nation, rooted in a particular land, living a particular way of life — that can only mean one thing: it’s on its way to fascism.”

But the “ruling class didn’t just demonize nationalism,” he continued. “They came to equate whiteness itself with evil.” As a consequence, Azerrad argued, those elites had decided that “the problem in nations is having majorities of white people. And therefore making Western nations less white became the moral imperative, hence the turn to third world immigration.”

Now, he said, the elite “jubilates” whenever the year 2045 is mentioned, since that is the projected date by which the U.S. is predicted to become a majority-minority nation.

Following Azerrad, James Carafano, the vice president of a foreign policy institute within the Heritage Foundation, warned in one of the final panels of the conference that immigration wouldn’t just transform Western countries, but might obliterate them completely.

“This is not a conspiracy,” Carafano said. “There is a global effort to have a world without borders. This is a serious, organized effort and it directly targets governments that get in their way and it tries to take over governments like ours and use them as instruments to do this.”

“There are a lot of problems with that,” he continued. “One of the biggest ones is that this is introducing one of the most horrible weapons of mass destruction in modern history, maybe even more horrific than a nuclear weapon. It’s the weapon of mass migration.” It had happened in Syria, Belarus and other countries, he said, and it was a significant national security threat facing the U.S. as well: “Someday, somebody’s going to go to Latin America and say, ‘Here’s a billion dollars. Go send a million people to the United States and destabilize them.’“