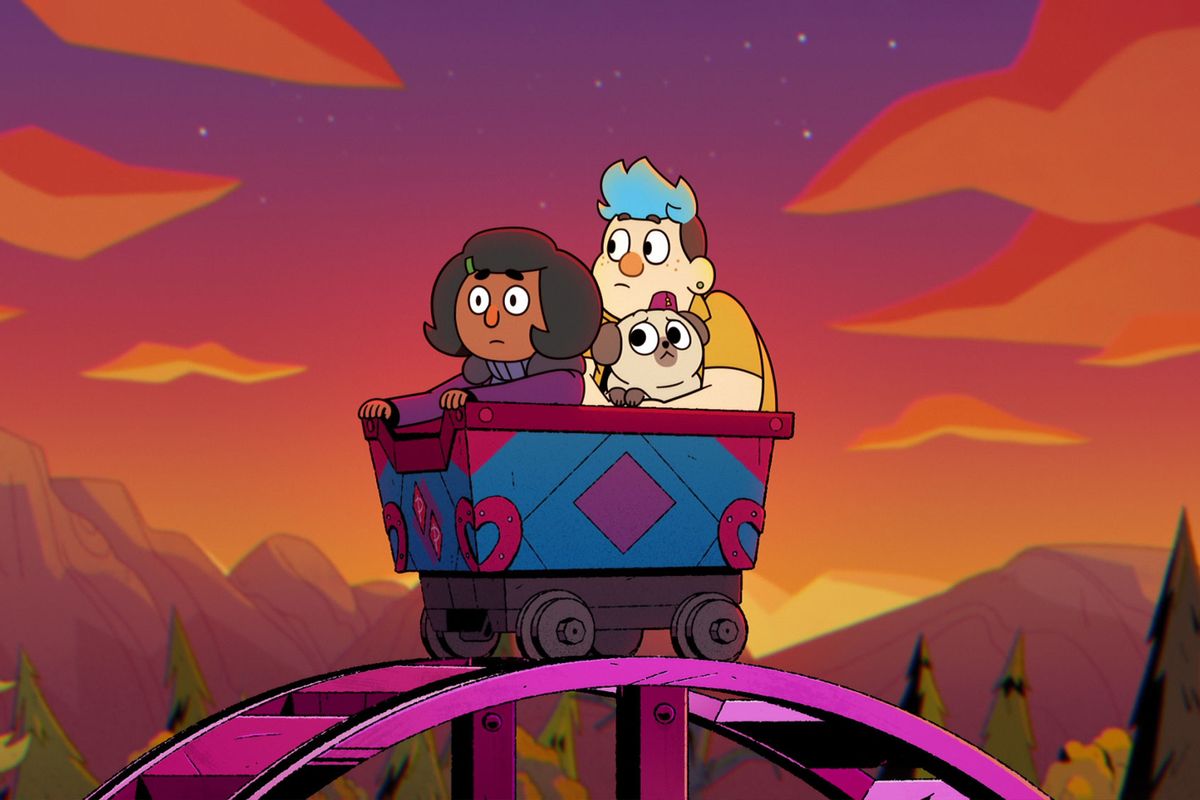 Although it’s stationed in Sandusky, Ohio, “Roller Coaster Capital of the World” Cedar Point sits on its own island in Lake Erie, a vaguely Peanuts-themed oasis consciously separated from the mainland. Thrill rides are far from my transportation of choice, as they represent escapism by way of death defiance, and I very much enjoy living. The ridiculously fast speeds, painfully sharp turns, stomach-flipping drops and lack of control kept me far away from the metal beasts for most of my life. As a child, I would stare up at Kingda Ka — the tallest and fastest ride in North America — from my backyard, and I swore I could hear the riders’ screams. It sounded more like bloody murder than enjoyment.

At Phoenix Parks, the central hub for demons and fans of schlocky television in Netflix’s animated series “Dead End: Paranormal Park” (think Dollywood for a Vincent Price-esque genre actress Pauline Phoenix), the screams may well be actual bloody murder. Walking through the gates, patrons are at the mercy of not just inflated wait times and needlessly expensive concessions, but also possessed mascot costumes, sleep-stealing Night Hags, and egotistical ghosts. Against all odds, it’s here that runaway Barney and socially awkward Norma decide to make a home and find their family.

Barney and I are (almost) uncomfortably similar: we both are scared of horror movies, are Jewish, and are transgender. While I’ve never run away from home, I don’t blame Barney for doing so; his parents’ lack of vocal support forces him to be subjected to transphobic rants from his grandmother. Couple that with the recent real-life obstacles facing LGBTQIA+ people — dozens of transphobic laws in circulation, Clarence Thomas’s dangerous idea that Obergefell v Hodges (same-sex marriage) was an “erroneous decision,” the increased targeting of Pride parades and drag shows — and it’s understandable that Barney leaves the real world for the safety of Pauline’s fantasies.

After getting a frantic late-night call from my friend, I agreed to come to Cedar Point hoping its promised fantasy would help assuage his pain of a bad few weeks plagued by personal problems. Part of this meant facing my own fears and riding some coasters, which was something that I had accepted until I walked onto my first coaster. Suddenly, my own anxieties about the heights and speed of rides compounded with the external issues, and I freaked out.

I felt weightless. Then WHOOSH. And I screamed, but for the first time all day, I screamed with joy.

The guided ascent up the first hill was filled with cursing that would put a sailor to shame; the anticipation reached a fever pitch when I started screaming about “Jesus, Mother Mary, and Joseph” for lack of any of my actual prophets coming to mind. We crested the hill of the Maverick, which at 100 feet was one of the smallest of the day, and then . . . we took off.

The twists and turns rattled me, batting me between the bars that were meant to hold me in place. Sounds of terror escapes my throat, though I don’t remember uttering them. This pattern repeated itself for the second ride of Steel Vengeance: anxious ascent up a 200-foot-plus hill and a terrified, vocal descent. 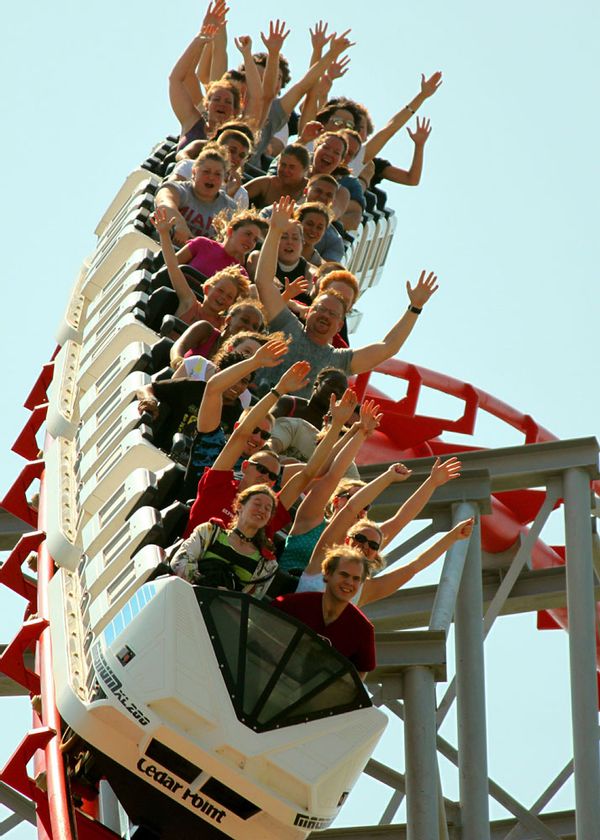 But by the third ride — the iconic Millennium Force — something within me broke. As we climbed the hill, I looked out at the gorgeous lake beside me and the terror I had felt all day morphed into something else entirely. That moment before we descended, everything was peaceful — the wind blew gently, the sounds of the park below were muted, and everyone looked like ants. I felt weightless. Then WHOOSH. And I screamed, but for the first time all day, I screamed with joy.

Hurtling down 308 feet at 93 mph, I was having a blast. Every other thought, every other fear of the outside world disappeared as I was forced into existing within the moment. Within the planned chaos of a roller coaster, nothing mattered — not my dysphoria, not my identity, not the people who don’t want me to exist. There was only the here and now. And from that moment on, I was not only excited for these rides but I craved this type of weightlessness. For the first time in months, these were the moments that I felt most like myself, whatever that meant.

People visit theme parks to, for lack of a better phrasing, leave their shit at the door. Once you cross the threshold into Cedar Point, Six Flags, Disneyland, whatever your amusement park of choice is, the world outside ceases to exist. You enter a wonderland populated by various cartoon characters — Disney, Looney Tunes, Pauline Phoenix, or even Garfield — where you happily pay exorbitant prices for mediocre fast food, all to keep the illusion intact. That illusion is of ignorance, of imagining a better world full of whimsy and bodacious thrills where nothing bad ever happens.

For transfolk like Barney and myself, these escapes are often the only way that we can fully inhabit our body during early stages of our transition.

Inside the gates of these parks, everything feels like it’s in your control. You can fly like Superman, go 20,000 leagues under the sea, or walk around as a literal demon; you can do whatever you can imagine and no one will judge you. The reason for this is simple: every attendee wants to live within the fantasy, one where giant mice give you life-affirming hugs or that you’re really hurtling through space and conquering the final frontier. As a queer person, the heightened reality lends itself to a blanket acceptance, a sense that since everyone agrees that animals (and cars and toys and demons and even emotions themselves) are worthy of respect and empathy here, then you are too.

Exploring the park, I noticed the difference in how people perceived me compared to the outside world. Walking on the street, serving tables at my day job, doing work at a cafe — we move slow enough to study one another during these moments, to run a cursory glance over someone to determine our safety. It’s evolution. But at Cedar Point, no one cared about me; it’s difficult to examine someone when coasters zoom by on massive metal structures and your favorite character is posing for photos. The sheer spectacle is distracting, and should someone take the moment to cast a glance my way, they simply saw another patron trying to experience the park to its fullest.

Amusement parks work because the social contract changes from being about the individual to being about the group, because if the magic is ruined for one person, it’s ruined for everyone. Strapped into a ride, everyone is stripped of their personalities and politics and thrown onto the same level: a human being simply trying to survive the impossible. With all our control taken away, we are all damned to the same fate; we become united in the thrill, our voices meshing together into one massive, joyous scream. There’s something intoxicating about climbing insane heights only to drop into a ridiculously fast speed and come out the other side unscathed.

For transfolk like Barney and myself, these escapes are often the only way that we can fully inhabit our body during early stages of our transition. There hasn’t been a day in my transition that the perfect female figure — skinny hourglass shape with shapely features — hasn’t crossed my mind. Although hormones are slowly helping my body soften and feminize, that doesn’t change that my shoulders are broad, that I have to scavenge for clothes that fit, that being in between genders calls out my lack of naturally belonging to either one. My body often feels like a cage, one that I can dress up differently to be less drab, sure, but also one whose rigid structure clashes with everything society wants.

Speeding down toward the ground at nearly 100 mph, the social pressures of gender norms and presentations are ripped away, leaving us with what’s left: ourselves. In the moment, the wind lashes against our arms, the turns jostle our necks, the empty air dangles below our feet. It’s a feeling of wholeness that’s hard to explain but absolutely vital, as it provides us the space for our confidence and comfort to grow. 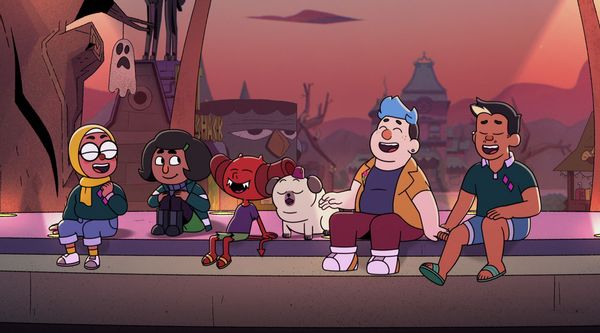 Running away to Phoenix Park allowed Barney to establish relationships where people saw him as a man instead of a trans man, a refreshing distinction for someone early on in transition. By never leaving the bounds of the park, Barney is able to completely eradicate the idea of expected normalcy. His new normal is full of demons and talking pugs, sleeping in coffins and eating fast food, and most importantly, having friends who love you more than family. Over the course of the 10 episodes, Barney grows into a more self-assured individual, one who actually feels deserving of the love provided by those around him.

Although Barney spends much of the season hiding from his family, he sets up a lunch to smooth things over. The meal takes place in perhaps the silliest place possible: an Old West saloon populated by overly dedicated actors. The backdrop adds humor to a serious discussion, allowing Barney and his father to quibble over blatant metaphors like, “Who gets the last chip?” and “What to order that represents your authentic truth?”

Finally fed up with the politeness, and the waitstaff’s constant stage fighting, Barney’s father exclaims in exasperation, “I don’t get it. We accepted you.” The statement is conclusive, as if their acceptance magically made them leagues better than the countless parents who disown their LGBTQ+ children. But having spent weeks at the park, Barney knows he’s worth more than simple acceptance, it’s the bare minimum. The family he’d rather be having a conversation with is Norma and his co-workers, people who exist within the fantasy that is Phoenix Parks and have never once questioned him or his identity. The time away from his family helps him verbalize how his parents can move beyond acceptance into actual love and support.

Where Barney can leave his family to return to misadventures within Phoenix Parks, I couldn’t stay at Cedar Point without breaking a few laws. Leaving the haven I had found meant that the weights I had removed would quickly settle back on my shoulders and mind. Overwhelmed by exhaustion by the time we reached our car, I leaned against the window and — with my eyes closed just right, hearing my two close friends sing along to the music as the car glided atop the asphalt — felt like I was on a roller coaster. For a few more minutes at least, I could stay weightless.