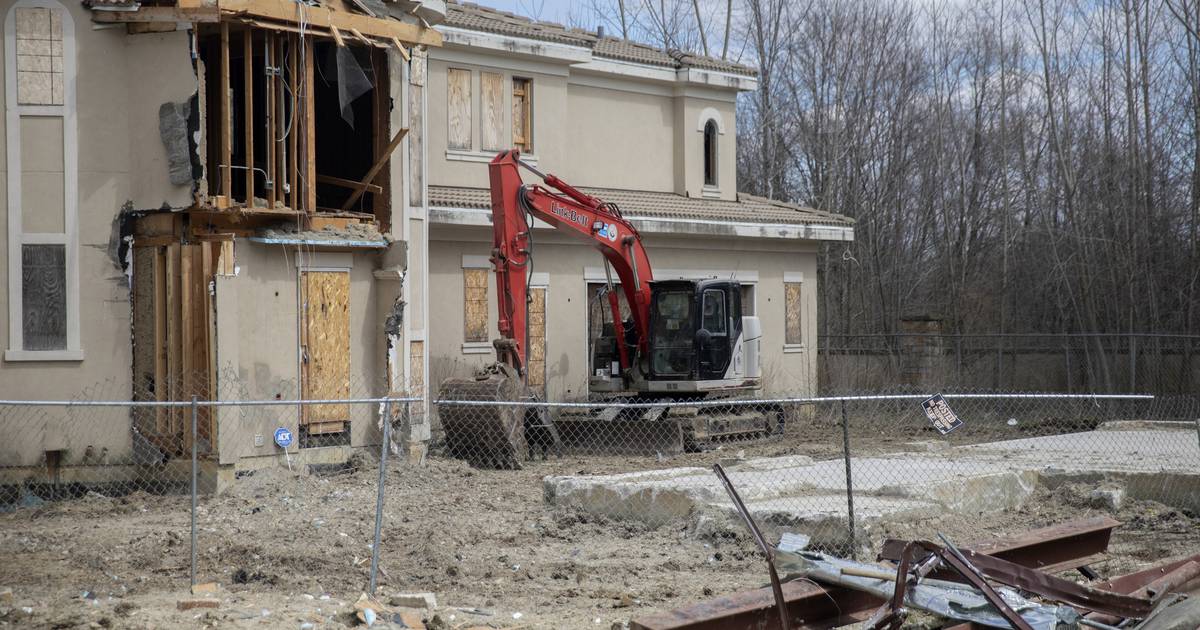 As Masud Arjmand sat in a Naperville coffee shop last week, describing the 15-year odyssey that turned his would-be dream house into a target for demolition, an excavator was already taking bites out of the unfinished Spanish-style mansion and piling the rubble into a huge heap.

Informed of that by a Tribune reporter, Arjmand appeared stunned.

He was apparently the last to know. Four days earlier, DuPage County had tweeted a video of the demolition in progress. That very morning, Arjmand’s lawyer was in front of a judge trying in vain to stop it.

Arjmand’s surprise was an odd twist to an unusual suburban story, in which a stucco and stone showpiece in one of the ritziest neighborhoods this side of the North Shore became an involuntary teardown.

Arjmand, 69, said he came to the U.S. from Pakistan 45 years ago to attend graduate school, a mere $300 in his pocket. He went on to become a partner at the Accenture consulting firm, retiring in 2008 with millions of dollars’ worth of shares.

Just before that, in 2007, Arjmand and his wife of six years began to build a new home on Donwood Drive, a street in unincorporated Naperville adorned with gated estates. After buying the 2-acre plot for $625,000, they designed a house fit for that grand setting, complete with five bedrooms, a two-story dining room, a rotunda and an elevator.

But the marriage soured, and in 2009 Arjmand filed for divorce. According to court documents, he and his wife came to an agreement that gave her assets he estimated to be worth $1 million, while he kept the house and other real estate, as well as his Accenture shares.

Two years later, his ex-wife returned to court to contest the agreement, saying she had been the victim of “coercion and the fraudulent concealment of assets.” After an 11-day hearing, a DuPage County judge concluded the arrangement was “unconscionable” and reopened the divorce.

Arjmand’s ex-wife directed the Tribune’s interview request to her attorney, who declined to comment.

Meanwhile, after sinking about $2 million into the construction of the Donwood Drive house, Arjmand paused when the financial crisis struck. He said the resulting slump put all of his real estate investments, which included two suburban strip malls, underwater.

Arjmand contends in court papers that his assets were frozen during the divorce case, endangering his real estate. When it appeared he wouldn’t be able to pay his property taxes, he said, banks called in $8 million of loans and forced the liquidation of much of his Accenture stock.

He was also left unable to access the roughly $1 million he needed to finish the house, he said. When he tried to sell the property, he said, he received only one lowball offer.

So there it sat for a decade, an earth-toned eyesore amid the many-gabled splendor of its neighbors. Dr. Andrew Korcek, who lives across the street, said the lot became an unsightly, overgrown nuisance.

“We had to treat our lawn with extra weedkiller because of the seeds that would come over,” he said. “It was always a problem.”

Worse than that were the trespassers who poked around the property. Teenagers with flashlights frequently wandered the house and yard, Korcek said, and some even crawled onto the tile roof during an ice storm.

Affidavits from DuPage County sheriff’s deputies describe the apprehension of numerous intruders, including kids who used the house as a hideaway to smoke weed. A police report from 2020 recounts how deputies snared three young trespassers who said they were just exploring.

“Other kids at school had told them to come and check it out,” the report says. “They did not think that they were trespassing since the house is abandoned.”

Arjmand said he naively believed the neighborhood was immune to vandalism. When trespassers were caught, he said, he didn’t have the heart to press charges.

A building inspector’s affidavit from 2020 outlines how dangerous the structure had become. Every door and window was broken, trash and graffiti were everywhere, 4 feet of water filled the basement, the second floor bounced under the weight of two adults, and an overhang at the front entrance was pulling away from the house.

With that, DuPage officials sought to force Arjmand to fix or demolish the house under the county’s “clean and lien” program, which uses grant money and liens to pay for the cleanup of blighted properties.

Sam Tornatore, chair of the county’s development committee, said DuPage has cleaned up or torn down a dozen properties since the program began eight years ago, though none has been as large or upscale as Arjmand’s.

“It’s been a very popular program, as you can imagine, with the (affected) neighborhoods,” he said.

Arjmand said he did all he could to protect the property, spending $100,000 on mitigations that included a fence, security cameras and alarms, as well as new sump pumps and basement support columns.

He wanted to finish construction, he said, and in February hired a contractor to get the permits that would forestall demolition. That never happened — Arjmand blamed mishaps with the county’s online permitting system — and in March, a judge denied his request for more time and gave the order: The teardown could begin.

Arjmand’s lawyer, Bryan Sims, filed an appeal but that didn’t halt the bulldozers. On April 18, DuPage County tweeted a video of the house and garage, their exterior walls peeled away to expose the framing and drywall.

In court papers, Sims said the DuPage County state’s attorney’s office, which is representing the county, informed him three days later that work had begun. He sought an emergency order to pause the demolition until Arjmand’s appeal could be heard, but the judge wouldn’t grant it.

Paul Darrah, a spokesman for the state’s attorney’s office, defended the county’s actions.

“Everything we’ve done has been authorized by court order,” he said.

Arjmand’s problems won’t end once the house is gone. The county plans to bill him $138,000 for the demolition and fine him $2.8 million for violating the county’s public nuisance ordinance and various building regulations.

Failing to pay could cost Arjmand the property, but the financial penalties appear to be far more than the land is worth. Real estate agent Michael LaFido, who is trying to sell a mansion listed at $6.5 million just north of Arjmand’s property, estimated the empty lot would fetch between $750,000 and $900,000.

He’s glad to see Arjmand’s house go, saying it has been “an elephant in the room” during his showings. Korcek said he and his wife have joked about watching the demolition with lawn chairs and a bottle of Champagne.

Arjmand still has his strip malls, a Chicago condo and a much smaller Naperville house. But with his shares drained, his divorce still unresolved and an IRS tax case hanging over his head, he said his finances have become precarious.

As for his dream house, not a single wall remained standing Tuesday evening. By the end of the week, if the county keeps to its schedule, it will be no more than a memory.

Arjmand couldn’t bear to look at the remains, but he vowed to follow through with his appeal.

“If the appellate court finds I should have been given (more time before the demolition), then who’s responsible for my losses?” he said.

House or no house, the Battle of Donwood Drive goes on.