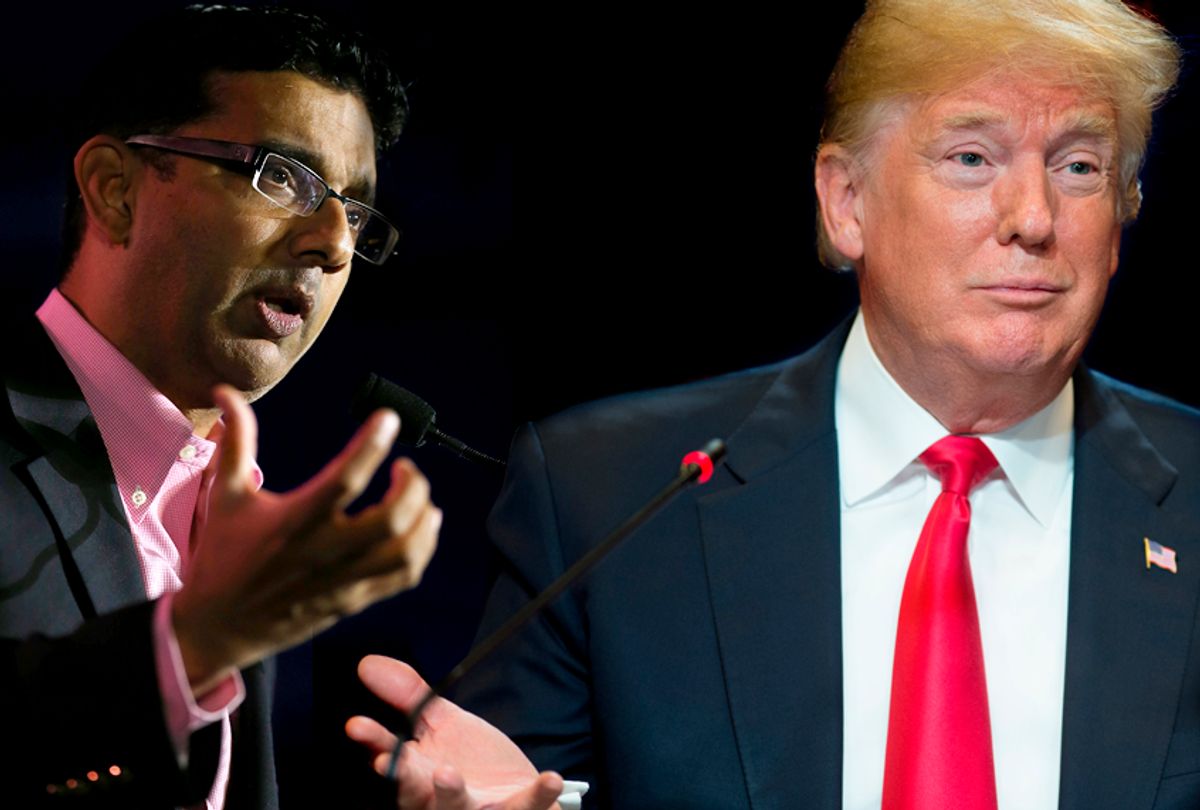 The Republican “Big Lie” about voter fraud takes root in the fact-free soil of opposite world, where the Oscars are held at Mar-a-Lago and honor Dinesh D’Souza’s “documentaries.”

Here in reality, D’Souza is a convicted felon, his films amount to a lucrative grift operation and should be filed under fantasy, and GOP claims of voter fraud actually seek to distract from their own extensive pattern of rule-rigging, lawlessness and brazen vote suppression. (As for D’Souza, he received a presidential pardon from Donald Trump.)

D’Souza’s latest work of wishcasting, “2000 Mules,” which is much-watched on conservative platforms and can be streamed for the decidedly Trump-inflated price of $29.99, alleges, without merit, that shadowy gangs of liberal nonprofits stole the 2020 presidential election through an elaborate absentee-ballot collection scheme.

The film calls this “ballot harvesting” or “ballot trafficking,” and it has as much merit as that ridiculous ’90s-era myth about drugged travelers waking in an ice-filled hotel bathtub to realize that organ thieves had removed a kidney.

This week, NPR reported that the conservative group leveling these claims, True the Vote, has made “multiple misleading or false claims about its work,” including that it “helped solve the murder of an 8-year-old girl in Atlanta.” Again and again, these charges and the film’s methodology have been debunked by fact-chunkers, denied by GOP election officials (who have repeatedly investigated and found them meritless) and deplatformed by Fox News and Newsmax.

Naturally, under the inevitable rules of opposite world, it was Republicans earlier this month who were hit with a “ballot harvesting” scandal. The Philadelphia Inquirer reported that dozens of GOP primary ballots were mailed to a P.O. box linked to an organization called the Republican Registration Center — even though voters didn’t recall asking for a mail ballot, and even if they had, couldn’t explain why their ballots would go to some sketchy address instead of, say, to their home.

In the universe of facts, this latest GOP voter fraud scandal would suggest that “ballot harvesting” is easy to catch under existing laws. In the right-wing rage-o-sphere, however, D’Souza’s misleading allegations have vaulted “ballot harvesting” and “ballot trafficking” into trending terms to describe how Democrats supposedly cheat.

Of course “ballot harvesting” didn’t steal the 2020 election. It’s a made-up GOP scare term. Yet as it becomes more prevalent, it’s important to note that what the term actually describes is nothing like conservatives and this “documentary” would have you believe.

Third-party ballot collection is actually a well-regulated, fraud-free and useful practice in some states, several of which vote almost entirely by mail. In many contexts, it allows elderly and disabled voters, along with those who live on Native American reservations or in other remote rural locations, to return a ballot without personally traveling to a post office. In some areas of tribal land, for instance, doing that might require a four-hour round trip.

When Republicans manufacture panic around its use, their real intention is no mystery: to make it harder for members of minority groups, disadvantaged communities and other Democratic-leaning constituencies to vote.

Perhaps the best case study of its importance — and how Republicans respond — comes from Arizona, where early voting and mail voting have been commonplace for years. Third-party ballot collection had long been permitted to make voting easier for people on far-flung rural communities or on Native American land, where mail service is limited and unreliable. On tribal land, only 18 percent of Native voters have mail service at home. It’s only common sense to allow a trusted community member to make a single trip.

After the 2010 elections, however, GOP lawmakers embarked on a concerted effort to shut this practice down. No one could offer any actual proof of fraud, in courts or the legislature, but a district court later uncovered the real intention of the ban’s sponsor in the state Senate: Shutting down an effective “get out the vote” strategy employed by his opponents.

When the Department of Justice expressed concerns that the proposed law might affect minority voters and demanded more information before “preclearing” it under the Voting Rights Act, Arizona’s attorney general conceded defeat and withdrew the request in order to avoid federal penalties.

When Republicans manufacture panic about “ballot harvesting,” their goal is obvious: Make it harder for members of minority groups to vote.

The law quickly re-emerged, however, once the conservative majority on the U.S. Supreme Court eliminated the preclearance provision in 2013, in the controversial Shelby County decision. Freed from that provision of the VRA, Arizona lawmakers reinstated the law. Years of litigation followed, and lower courts repeatedly found the law discriminatory — in part because those who crafted it, such as the state’s election director, admitted it was “targeted at voting practices in predominantly Hispanic areas.”

While the U.S. Supreme Court, as part of its wide-ranging assault on the Voting Rights Act, allowed the ban to stand, holding that there were still other ways to vote in Arizona even if this law had some disparate effect, it’s Justice Elena Kagan’s dissent that will be remembered.

“The law prevents many Native Americans from making effective use of one of the principal means of voting in Arizona. What is an inconsequential burden for others is for these citizens a severe hardship,” she wrote. “Arizona has not offered any evidence of fraud in ballot collection, or even an account of a harm threatening to happen.” She concluded that the conservative majority was living in an “alternate world.”

Indeed. Only in that alternate world, only in our fact-free ideological media bubbles, could a practice that ensures equal access to the ballot for those who need it most be misrepresented as something nefarious — and without offering any proof that withstands the slightest scrutiny. It’s not just that D’Souza’s “2000 Mules” spreads toxic untruths; it smears and rebrands something helpful to many voters (by no means exclusively to Democrats) as suspicious, devious and perhaps criminal.

“Ballot trafficking” is yet another big lie. As long as grifters can cash in on phony claims, and dishonest partisans can activate their supporters by corrupting faith in democracy itself, it will hardly be the last.

Read more on the 2020 election and Republicans’ “Big Lie”: