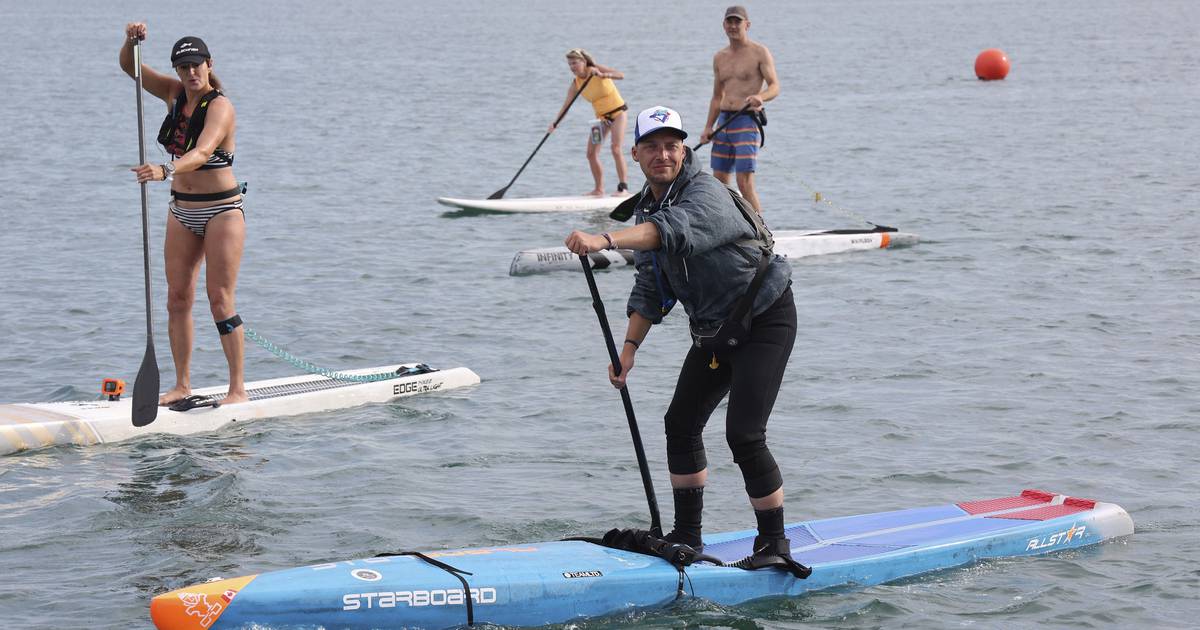 A small dot on the horizon grew larger as a group of 10 paddleboarders prepared to join it. Some of them whistled, hooted and yelled words of encouragement, waving their paddles in the air.

And so Michael Shoreman reached the shore, equipped with a paddle and a bright blue board.

At approximately 8:30 a.m. on Wednesday, the 39-year-old Shoreman landed on North Avenue Beach after a 27-hour journey on paddleboard across Lake Michigan that started Tuesday at 5:40 a.m. According to his team, Shoreman is on the way to being the first athlete with a disability to cross the Great Lakes.

He wiped away tears as his feet touched the sand. He had beaten his expectations to travel the 44.1 miles between Union Pier, Michigan, and Chicago in 30 hours.

“This is the emotional part,” Shoreman’s manager Liana Neumann said. She picked up the pace to go give the paddleboarder a hug.

Shoreman has had plenty of these emotional moments over the summer. On July 5, he crossed Lake Superior in eight hours, after crossing Lake Huron in 28 hours on June 13 and Lake Erie in seven hours on May 19.

“I feel really tired, but I’m really happy to be here,” Shoreman told the Tribune. “Chicago is one of my favorite cities in the world; it’s my favorite American city. And so to be able to arrive here, in front of this beautiful skyline and all these amazing paddleboarders, is just amazing.”

In 2018, Shoreman suddenly developed Ramsay Hunt syndrome, a shingles variant and neurological condition. The disease attacked his ear, paralyzed and collapsed the right side of his face and gave him mobility, vision, speech, taste and hearing problems. He also has vertigo, which makes paddleboarding particularly difficult.

“So I went from being very athletic to not being able to walk, and I spent a year learning how to retrain my brain how to walk properly,” Shoreman said. “And the doctors said I’d never paddleboard again. And I had a mental-health breakdown.

“And on the other side of learning how to walk and getting back on the paddle board, I just wanted to work with mental health organizations that support youth and young people and help support them so this is to raise money to put mental health programs in schools for young people.”

Shoreman has been involved with many mental-health advocacy organizations such as Kenneth Cole’s The Mental Health Coalition, The Trevor Project and the Tyler Clemente Foundation, and Canada’s youth mental health organization Jack.org.

Neumann, Shoreman’s manager, has been friends with him for about 7 years — ever since she took a class with him back on the Toronto waterfront, where he was a paddleboard instructor.

“I’ve been a mortician, a funeral director, for 22 years and so I’m off with PTSD. I’ve been off for two years,” she explained. “And he’s doing this for mental health, so it’s dear to my heart.”

During the crossings, Shoreman cramps, sits down, stands up, laughs, cries. But one thing he can’t do is stop paddling for too long — otherwise the board drifts away on the water.

“Last night was very difficult,” he said. “It was very scary at times.”

Yet every time the sun comes out, Shoreman is re-energized again. Neumann said she has never met someone with “such raw determination.”

“I don’t know where he gets it from. It’s really something to witness,” she said. “And he just pulls it from within and remembers why he’s doing this and then gets it done.”

Closer to the city, paddleboarders from the group Chicago Stand-Up Paddleboarding (SUP) joined Shoreman to give him one last push.

“You guys are the best,” Mike told them once they were all ashore.

“We’re just the support. YOU are the best,” an accompanying paddleboarder answered.

A support team of five people accompanied Shoreman by boat during his last crossing, including two videographers, two captains and Neumann. They help keep his spirits up, but they also help with logistics such as feeding him a carbohydrate shake every 30 minutes and having him drink electrolytes every hour.

The next and last Great Lake that Shoreman will attempt to cross is Lake Ontario. He tried to cross it from Rochester to Toronto in the summer of 2021, but was unsuccessful. He’ll face the challenge again mid-August.

Shoreman said his team says they love these trips and always ask him where the next adventure will take them.

“I joke around, ‘Well, maybe we could do the Arctic next,’” he said in between chuckles. “No, I have interests, of course. But you know, this is purpose-driven.”

He talked about how many people suffer of mental health problems such as anxiety, stress and depression.

“We don’t talk about it, and a lot of people suffer and they shouldn’t, and this is to raise awareness and to hopefully raise a lot of money to save young people’s lives,” he said.

Whether Shoreman will attempt crossing other large bodies of water in the future remains to be seen. But regardless of what happens next, Neumann is convinced of one thing.

“It won’t be the end of what you hear about Mike,” Neumann said. “He’ll keep being out there, making a difference.”