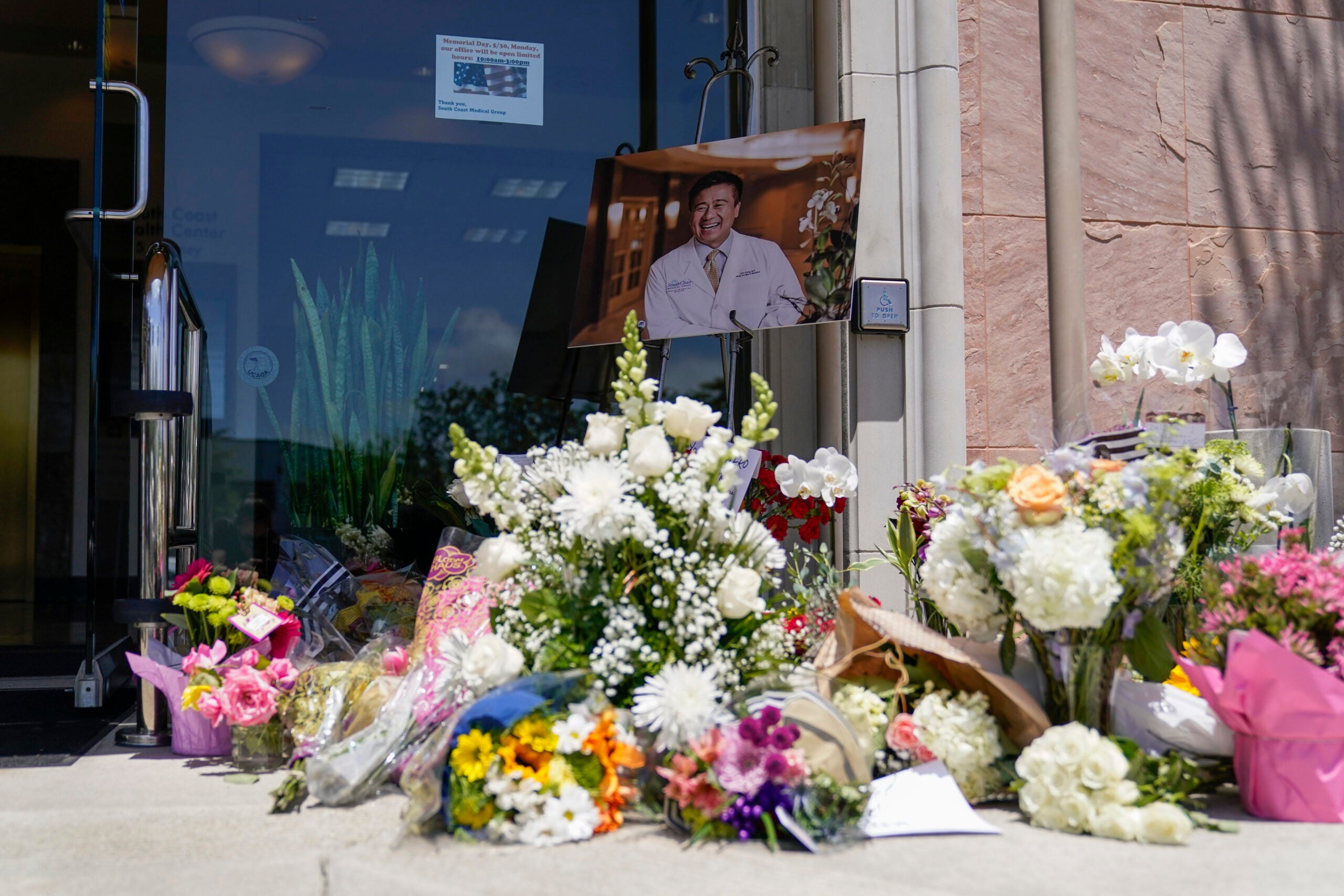 ALISO VIEJO, Calif. (AP) — He was known by all as simply Dr. John, the quiet, calm physician who mentored kids in Kung Fu, finding time between patient appointments to encourage people to learn self-defense. So it was no surprise to friends and colleagues that John Cheng spent his final moments saving others by rushing a gunman who opened fire on a Southern California church of mostly older Taiwanese people, including Cheng’s recently widowed mother.

The 52-year-old father of two often looked for ways to protect people. He was concerned enough about the growing number of mass shootings that he had taken safety courses to prepare himself for a situation like the one that cost him his life Sunday.

“It was characteristic of Dr. Cheng to charge forward at that gunman,” said Erica Triplett, Cheng’s office manager. “It does not surprise any of us. Dr. Cheng exemplified what he was built for — his heroism that saved so many people not only at that church, but throughout his career.”

The family and sports medicine physician was like family to the staff and he encouraged them to learn Kung Fu, telling them about the importance of knowing self-defense techniques. He also learned how to handle a gun for that same reason.

That preparedness combined with Cheng’s serene disposition likely gave him a proclivity for acting heroically, according to active shooter experts. Most people in those situations freeze.

“People don’t rise to the level of the occasion; they fall to the level of training that they have,” said active shooter expert Chris Grollnek, who believes such trainings should be as common as fire drills. “This man obviously as a doctor was inoculated (to deal) with bad things from a bone sticking out of somebody’s arm to a tragic event like what happened inside the church in Orange County.”

Authorities credit Cheng’s quick action with saving perhaps dozens of lives at a celebratory luncheon for congregants and their former pastor at Irvine Taiwanese Presbyterian Church, which worships at Geneva Presbyterian Church in the Orange County community of Laguna Woods.

Prosecutors say the gunman, David Chou, 68, of Las Vegas, was motivated by hatred of Taiwan, where he was born and grew up after his family was forced from mainland China when Communists took control. He had no connection to the church but it afforded him access to a larger group of Taiwanese to target, authorities said.

Chou spent about an hour with attendees at the luncheon, apparently to gain their trust so he could execute his plot, authorities said. He chained doors shot and glued locks. He had two 9 mm handguns and three bags, containing four Molotov-cocktail-type incendiary devices and ammunition.

When Chou began shooting, Cheng charged him and was shot. He died at the scene but his quick action disrupted the shooter, who was then hit by a chair thrown by the church’s former pastor, Billy Chang, and jumped on by three members of the congregation who used an extension cord to tie him up until police arrived.

Cheng was the only one killed. Five others were wounded, including four men ages 66 to 92 and an 86-year-old woman.

“Dr. Cheng’s selfless love for others stopped a hate-filled act from claiming more lives beyond his own,” Barnes said in a tweet.

Those who knew Cheng said that selflessness defined his life.

He started his practice by knocking on doors to say hi and introduce himself as the new family doctor in the area, said Johnna Gherardini, executive director of South Coast Medical Group. Cheng gave physicals to student athletes and then donated the money he was paid to Aliso Niguel High School.

Gherardini took Kung Fu with her daughter at Cheng’s urging.

“He’s always taught us how to protect ourselves,” she said.

His patients remembered him as a concerned listener. “He was unfathomably kind,” read a note left by a patient taped to the door of his office, where people left flowers to pay homage.

In a video posted online, Cheng said he was inspired to get involved in medicine after seeing the care his father provided as a physician in their small community in East Texas, where the family had moved to from Taiwan when Cheng was a baby.

“It’s those small-town values that were ingrained in me when I was younger that really helped create this sense of community,” said Cheng, who graduated from Texas Tech University School of Medicine and did his residency in California. “And in this modern society, in these modern times, we miss a lot of that.”

He called the patient-doctor relationship special “so you get to know a lot about the patient, their family, the community that they live in. And what’s beautiful is that I live in the same community.”

Cheng’s pastor and close friend, Ira Angustain, took a class with him to learn how to handle a gun safely.

“We talked about how people were losing their minds and going around shooting people for no reason,” said Angustain, pastor of Kingdom Covenant Church in the nearby community of Lake Forest. “He didn’t want to feel helpless.”

On Sunday morning, Cheng texted Angustain to let him know he wouldn’t be coming to service because he was taking his mother to her church.

She had stopped going since her husband passed away a couple of months ago, still grieving his death. But Chang, the church’s former pastor who had written to her expressing his condolences, was visiting from Taiwan and the church had invited her to a service and luncheon to see him.

Cheng volunteered to drive his mother, but in a horrible twist of fate, instead of the outing giving her peace, she would end up witnessing his death that day.

“My heart is aching,” the visiting pastor wrote in a statement.

Shortly before the shooting, Angustain replied to Cheng’s text, telling him to say hello to his mother.

“You’re such a good son,” Angustain texted to Cheng.

“I can always be better,” Cheng replied.

“Evil didn’t take Dr. John out,” Angustain said. “Dr. John chose to lay down his life for others so they could live.”