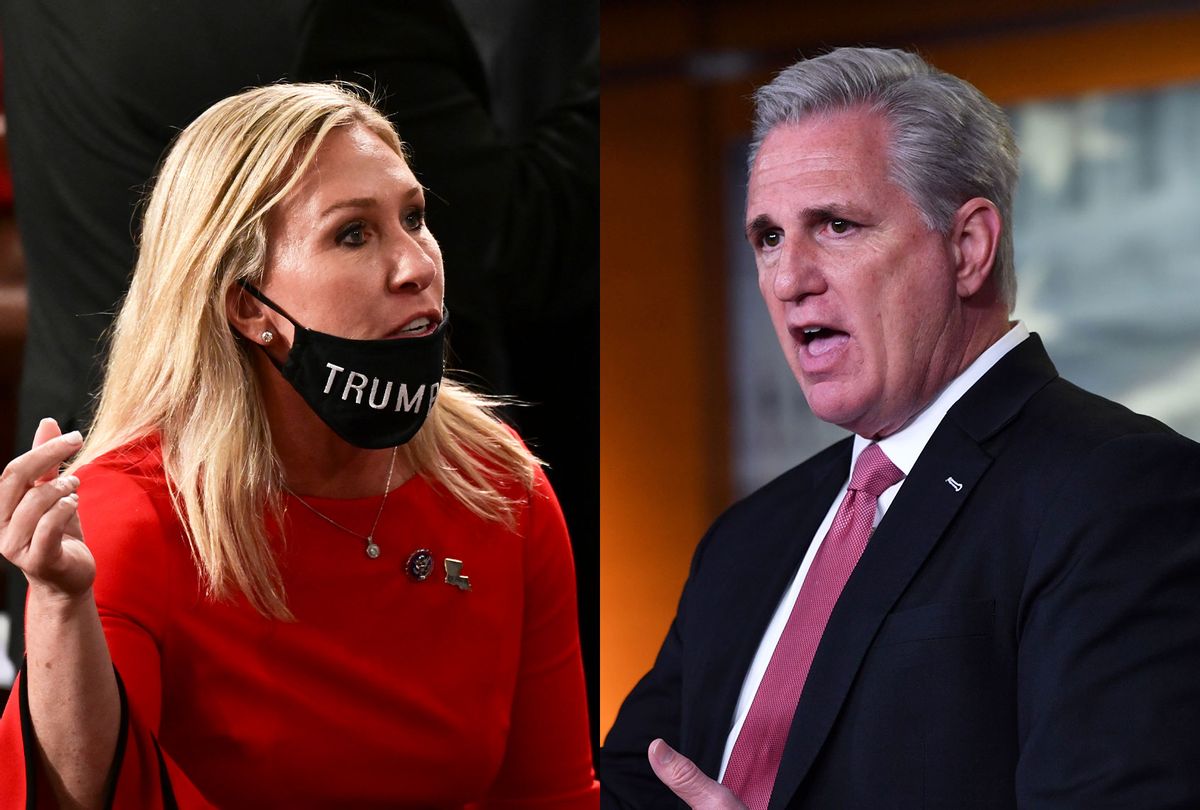 Donald Trump has already made it known that he enjoys watching Rep. Kevin McCarthy, R-Calif., grovel way too much to destroy the House Minority Leader’s status or future hopes of regaining the Speaker role. He’s already played the part of the magnanimous tyrant granting absolution to McCarthy for a leaked tape showing that McCarthy wanted Trump to resign after Trump incited an insurrection at the Capitol on January 6, 2021. On Tuesday, however, New York Times reporters released another recording of McCarthy from January 10, 2021, in which he complained about the more overtly insurrectionist members of the Republican caucus.

They’re “putting people in jeopardy,” McCarthy said of his caucus members Rep. Matt Gaetz of Florida and Rep. Mo Brooks of Alabama, reminding his colleagues that “these people came prepared with rope, with everything else.”

So despite his past sycophantic support of Trump, McCarthy’s taped words set off another round of vitriol aimed at him from the more loudly fascist members of the GOP. Gaetz, for instance, issued a statement calling McCarthy “weak” and “sniveling.” Which is true enough, but not, as Gaetz implies, because of McCarthy’s extremely temporary moment of doubt about the wisdom of violent fascism. Tucker Carlson, the Fox News host who definitely views himself as the true leader of the GOP, laid into McCarthy on air, calling him a “puppet of the Democratic Party.”

RELATED: Keep the leaks coming: The case against Donald Trump is being built up by Republicans’ big mouths

The whole thing is very exciting for progressives, who hope all this Republican in-fighting will weaken the party ahead of the 2022 midterms. But the truth of the matter is that, despite Gaetz’s whining and Carlson’s chest-thumping, McCarthy — who continues to be backed by Trump — seems secure in his position in the GOP.

Politico reporters, hungry for Capitol Hill drama, shook down every congressional Republican in sight after this second tape was released but found that “few Republicans appeared to take issue with it.” The Washington Post reports that, after McCarthy “defended himself Wednesday at a closed-door meeting of House Republicans,” House Republicans gave him a standing ovation. (If you threw up in your mouth a little, that is a natural reaction and no reason to call a doctor.)

Still, I wouldn’t get too invested in the hope that Republicans don’t want fascist clowns like Brooks, Gaetz and Rep. Marjorie Taylor Greene of Georgia running the party. On the contrary, most of the House GOP could be classified as fascist clowns, as the majority of them — including McCarthy — voted on January 6 to nullify the election and support the coup. And that was after the Capitol riot, so there can be no confusion about whether they were standing with the rioters or not.

The reason McCarthy’s comments aren’t causing much of a ripple among Republicans is that they know that, despite his occasional concerns about the downsides of using violence to obtain power illegally, McCarthy is an insurrectionist through and through. He will always back Trump’s cause of ending democracy and creating permanent minority rule for Republicans. Indeed, as Burns and Martin note in their article, by late January, “McCarthy had already lost his appetite” for punishing any Republicans he knew were stroking violence.

RELATED: Kevin McCarthy quietly gets away with holding Republicans to a lower standard than Donald Trump

On a recent episode of Gaetz’s podcast, Greene unleashed a rant after being reminded that Karl Rove, advisor to former president George W. Bush, claimed people like her and Gaetz did not have a “significant blip” of influence over GOP leadership.

The reason McCarthy’s comments aren’t causing much of a ripple among Republicans is that they know that, despite his occasional concerns about the downsides of using violence to obtain power illegally, McCarthy is an insurrectionist through and through.

Most of what Greene says is a lie, but in this case, she’s speaking real truth: People like her have way more power than people like Rove in the GOP. McCarthy may technically be the leader of the House Republicans, but Greene, despite having no committee assignments, is much more the agenda-setter. Indeed, it may be in part because she has no formal duties inside Congress, freeing her up to spend all her time as a taxpayer-funded pundit. She has the ear of the GOP base and is able to keep the pressure high on McCarthy to stick with the fascist agenda, and not let those momentary pangs of conscience sway him.

It’s also important to understand that McCarthy isn’t “afraid” of Trump or Greene. On the contrary, while he may not have loved the violence, he has always been on board with the larger program of manipulating election laws in order to install Republicans in power against the will of the voters. As Greg Sargent of the Washington Post writes, what we’re seeing from McCarthy is less “fear” of Trump and the base, but more a recognition that Trump’s “pathologies are helpful in keeping his voters energized in the GOP coalition.” This is less cowardice and more leading the base by throwing them cookies. Which is why all this smoke-blowing from Carlson and Gaetz will never amount to any real effort to remove McCarthy from leadership. Carlson likely knows the intra-party squabble in the immediate aftermath of January 6 was less about whether to run a fascist coup and more a tactical dispute. Carlson also knows, because this has been his goal, that this fight was resolved for the pro-violence side a long time ago, starting the moment Republicans voted against impeachment and escalating when McCarthy tried to sabotage the January 6 commission.

So why devote so much time and energy to play-acting outrage at McCarthy on Fox News?

In truth, that segment was probably less about leaning on McCarthy, who is already all-in on the politics of insurrection, and more about leaning on the Fox News audience. Right now, the GOP propaganda machine, led by Carlson, is focused heavily on the goal of rewriting the history of January 6 for their audience. As I wrote yesterday, the initial response from Republican propagandists to the insurrection was fear that Republican voters would balk at the violence. The initial propaganda focus was on generating conspiracy theories to blame “antifa” or the “FBI” for violence caused at Trump’s behest. But since then, there’s been a shift from reimagining the Capitol insurrection not as an unfortunate overreach, but as a glorious revolution.

Performatively yelling at McCarthy about tapes where he expressed doubts about violence a year ago — an opinion he’s backed off of — isn’t really about McCarthy.

Even more crucially, Carlson’s segment is part of a larger Fox News-led push to guide their audience to the idea that future violence is not just acceptable, but commendable.

The push for violence is why Fox News hosts were hyping up the People’s Convoy, and why they dropped support their second it was clear that the truckers were more of an annoying nuisance than a violent threat. It’s why there’s been a major escalation of dehumanizing rhetoric aimed at progressives, including widespread false accusations of pedophilia.  It’s why we’re seeing more people like Carlson and Greene fantasize openly about physically attacking perceived political opponents. This is all about stoking the GOP base up to believe violence is good and necessary.

Performatively yelling at McCarthy about tapes where he expressed doubts about violence a year ago — an opinion he’s backed off of — isn’t really about McCarthy. It’s about signaling to the GOP base that the “violence is bad” opinion is now a violation of the tribal code, enough to get you accused of, heaven forbid, sounding “like an MSNBC contributor.” The true message that Carlson is sending to his viewers with his rant isn’t that McCarthy is bad. It’s that real Republicans support political violence.