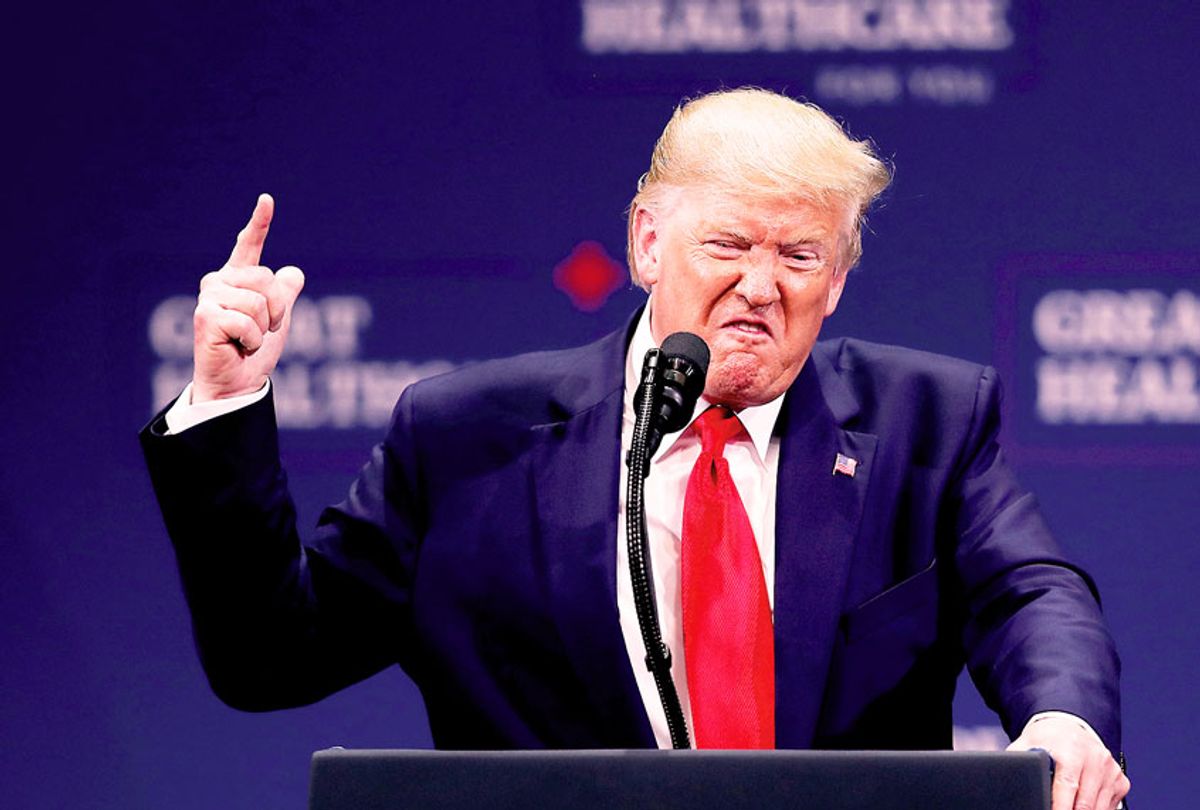 For at least seven years, Donald Trump and his neofascist movement have inflicted abuse of many kinds on the American people — emotional, physical, financial, spiritual and psychological. The Republican Party and the “conservative” movement have, for the most part, been eager participants and accomplices in this abuse.

As the 2022 midterm elections suggest, many Americans are finally trying to break free of this abuse. That, however, is the most dangerous time in any abusive relationship, when the abuser often lashes out and does everything they can — up to and including extreme violence — to keep the victim under their control.

In a December 2020 interview with Salon, neuroscientist Seth Norrholm discussed how this dynamic works.

There will be some type of formal legal action taken, such as a divorce or restraining order. There will be some attempt by the abuser to push the boundaries of the restraining order, for example. That can involve physical stalking or online stalking. They may make a dummy account to track and stalk their target online as well. The relationship is formally dissolved, but the abusive elements still remain.

Now, if we think of Trump as being in an abusive relationship with the American people, this is unique in the country’s history….

The worst thing one can do for a malignant narcissist or an abuser like Donald Trump is to tell him or her that they are correct or to otherwise validate the lies and false persona. Because then not only is this person pathologically telling themselves how special they are and how superior they are, but they have an echo chamber that is telling them the same thing.

Clinical work and other research show that the most dangerous time in an abusive relationship is the end. That is when there is likely to be an escalation of some sort. This is when the abuser is most likely to be at their most volatile.

Trump and his movement have been slowed down in their attacks on democracy and human decency, but they have not been stopped or defeated.

Just before Thanksgiving Trump hosted the antisemitic rapper Kanye West (who now styles himself Ye), along with white supremacist and neo-Nazi Nick Fuentes, for dinner at Mar-a-Lago.

Last week, a group affiliated with the antisemitic QAnon cult held an event at Mar-a-Lago. Trump welcomed them in person, saying, “You are incredible people, you are doing unbelievable work, and we just appreciate you being here and we hope you’re going to be back.”

The next day, Trump endorsed a message on his Truth Social site which claimed that the Jan. 6 Capitol attack and coup attempt was a “false flag” operation designed to entrap or incriminate “innocent” Trump supporters. That narrative fits into a much larger disinformation and propaganda strategy by Trump and his movement seeking to minimize or falsify the events of that day while simultaneously supporting and encouraging right-wing political violence.

In a hearing held before the D.C. Circuit Court of Appeals last Wednesday, an attorney for Donald Trump argued that when Trump was president he could have told his followers “to burn Congress down” and would still have been immune from any lawsuits brought against him by the victims. This Bloomberg News report provides the context for that extraordinary claim:

Presidents do typically enjoy immunity from lawsuits over official acts, which includes election-related activity. Chief Circuit Judge Sri Srinivasan on Wednesday asked Binnall if that should apply to a president who urged supporters in a private meeting to go to the polls and intimidate voters to prevent them from exercising their right to vote.

Binnall said that would be “horrible” but that, yes, immunity would apply. He said the line for liability for a sitting president should be drawn at “purely personal” conduct and interests, such as sexual assault allegations or a conversation between a president and their stockbroker about financial holdings. But he suggested a president urging his supporters to question the electoral vote count was merely using the office’s well-established “bully pulpit.”

Circuit Judge Greg Katsas said he was struggling with the fact that the case against Trump involved “at least colorable” allegations that he incited the mob that attacked the Capitol. Katsas then posed the hypothetical of a president urging supporters to “burn down Congress.”

Binnall said civil immunity would apply in that instance too, but he said impeachment and possible post-presidency criminal charges would offer other avenues for accountability.

Building off her colleagues’ hypotheticals, Judge Judith Rogers asked if Trump’s position was that there was no role for the courts even if there was a finding that a president was “seeking to destroy our constitutional system.” Binnall replied that, based on such facts, such acts shouldn’t be subject to civil litigation.

In essence, Trump is arguing through his lawyers that he was or is almost entirely above the law. That certainly aligns with his most ominous recent threat to American democracy and the country’s future, his proclamation that the Constitution should be “terminated” in order to return him to office immediately. Trump has never stopped claiming that Joe Biden is an illegitimate president and should be removed from office. This is not just hyperbole or empty rhetoric: Public opinion research shows that Trump has millions of followers who are potentially willing to support or engage in acts of terrorism to accomplish such a goal.

Although a handful of prominent Republicans have begrudgingly criticized Trump’s direct threat against the Constitution and the rule of law, most have remained silent, including Florida Gov. Ron DeSantis, Trump’s supposed political rival.

As Ruth Marcus of the Washington Post writes, “This is insurrectionism by social media”:

This is insurrectionism by social media. Nothing — and certainly not imaginary “Fraud,” capitalized or not — “allows for the termination” of constitutional guarantees. Trump is laying the groundwork for a coup.

We can dismiss the post as just the latest Trumpian bluster, something he will never be capable of implementing. Yet the mere willingness to entertain and encourage extra-constitutional action is alarming coming from a man who is seeking to return to office.

Which is why Trump’s words must be highlighted — and called out. I’m past expecting Republican leaders to speak out. We know that, for most, their spines have collapsed and their courage reduced to a shrunken kernel.

Rep. David Joyce of Ohio, chair of the Republican Governance Group, even said in an ABC News interview that Trump’s threats against the Constitution were not automatically disqualifying and that he would support Trump if he becomes the 2024 Republican nominee.

Americans are exhausted and deserve a moment to catch their breath — an extended struggle to defend, secure and expand democracy still lies ahead.

In a statement, the Lincoln Project, a leading anti-Trump conservative group, sounded the alarm about this perilous moment: “Donald Trump and the MAGA movement must be defeated or the American experiment will come to a crashing end. Americans must join together, place their policy differences aside and confront the existential threat posed by Donald Trump and his anti-democracy supporters in 2024.”

A new op-ed at the Kansas City Star perfectly channels how so many Americans are feeling in this moment: “If you listened closely, you could hear millions of Americans sighing with relief Tuesday night, as the results from Georgia’s runoff Senate election came in.”

Absolutely true. Americans are exhausted and need to catch their breath to prepare for what will still be an extended struggle to defend, secure, heal and expand democracy against neofascism and authoritarianism and other forms of civic and societal evil. There is no question that the election of Joe Biden, and the mixed results of the 2022 midterms, has gained pro-democracy forces a little breathing space. But the Republican fascists and the larger white right and conservative movement are not done with their abuse. Republicans will soon control the House of Representatives and will do everything in their power to inflict further pain on the American people, which will only be amplified by the country’s pre-existing forms of inequality and the structural violence it inflicts on millions of vulnerable Americans every day.

Some factions of the right are quarreling and divided, which is helpful, but they will be back, not remotely deterred in their attempts to end American democracy and to engage in acts of maximum cruelty against the long list of people they consider their enemies. Now is not the time for the American people and the country’s pro-democracy movement to back off or relax. The decision to escape the abuser is a crucially important first step. But it does not mean the danger has passed.