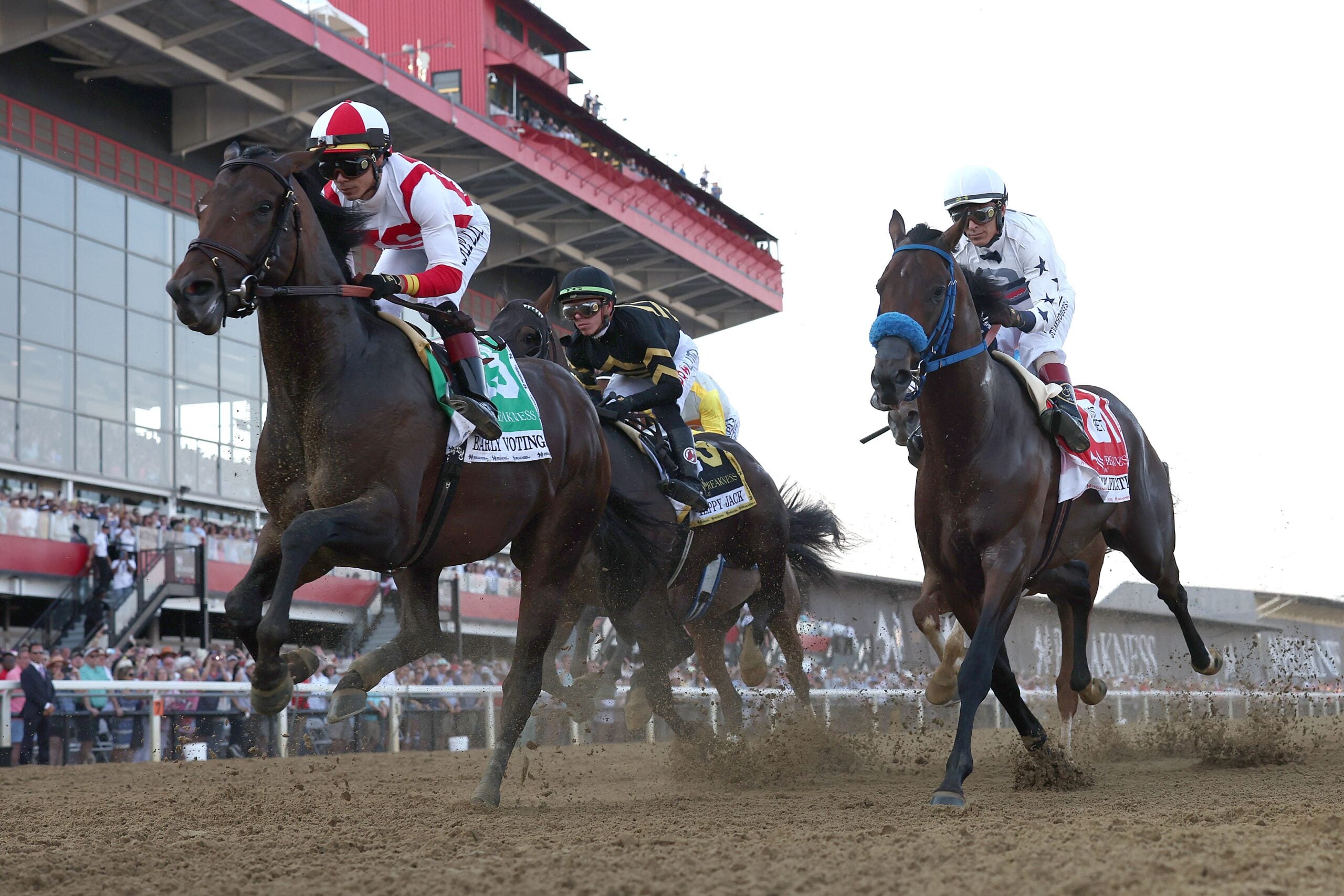 BALTIMORE (AP) — Maybe extra rest isn’t such a bad thing for a racehorse after all.

In the Preakness Stakes that was run without the Kentucky Derby winner because Rich Strike’s owner felt he needed more time off after his 80-1 upset, Early Voting validated a gutsy decision to skip the Derby and aim for the second leg of the Triple Crown.

Early Voting held off hard-charging favorite Epicenter to win the Preakness on Saturday, rewarding trainer Chad Brown and owner Seth Klarman for their patience. Early Voting stalked the leaders for much of the race before moving into first around the final turn and finished 1 1/4 lengths ahead of Epicenter, who was second just like in the Derby.

“We thought he needed a little more seasoning, the extra rest would help him,” Klarman said. “He was pretty lightly raced — only three races before today. And as it turned out, that was the right call. We wanted to do right by the horse, and we’re so glad we waited.”

The initial plan in the Preakness was for Early Voting not to wait and for jockey Jose Ortiz to take him to the lead. That looked especially important on a day when the dirt track at Pimlico Race Course was favoring speed and making it hard for horses to come from behind down the stretch.

But when Armagnac jumped out to the lead, Ortiz settled Early Voting, who had plenty left in the tank before the finish line with Epicenter threatening inside at the rail.

“I was never worried,” Brown said. “Once we had a good target, I actually preferred that. We were fine to go to the lead, but I thought down the back side it was going to take a good horse to beat us. And a good horse did run up on us near the wire and it was about the only one that could run with us.”

After just two Triple Crown winners in the past four-plus decades, Rich Strike owner Rick Dawson took plenty of criticism for skipping the Preakness because he felt the horse needed more rest to prepare for the Belmont Stakes on June 11.

Some of that might be muted in the aftermath of Early Voting’s impressive performance.

“That’s very hard to get an owner to pass on the Derby, and they did the right choice,” said Ortiz, who won the Preakness for the first time. “The horse, I don’t think he was seasoned enough to run in a 20-horse field and they proved that they were right today. I’ve been on him since he was a baby. We always knew he was very talented, but we knew he was going to be a late developer.”

Klarman and Brown cast doubt on the possibility of Early Voting taking on Rich Strike in the Belmont to make it a showdown between the Derby and Preakness winners. They said Early Voting might not be suited for the mile-and-a-half Belmont.

But Early Voting had no problem with 1 3/16 miles in the Preakness, which did not have a blazing fast pace like the Derby.

“It’s just beautiful when a plan comes together,” Brown said.

Early Voting, who went off at 5-1, gave Brown his second Preakness victory. Cloud Computing, the 2017 winner, is also owned by Klarman’s Klaravich Stables.

“Cloud Computing was a once in a lifetime and now I have a twice in a lifetime,” said Klarman, who grew up three blocks from Pimlico and was celebrating his 65th birthday. “Really hard to believe it could’ve happened.”

Although Epicenter was passed by Rich Strike in the Derby and couldn’t make a similar move in the Preakness, it was a familiar feeling for trainer Steve Asmussen and jockey Joel Rosario. A disappointed Asmussen said his horse “just had too much to overcome” after a rough start.

“I couldn’t get my position,” Rosario said. “I had nowhere to go. You just have to stay there and hopefully at some point it opens up. It was really tight the whole way.”

Early Voting finished first in a field of nine horses, which included D. Wayne Lukas-trained filly Secret Oath and three who came back after running in the Kentucky Derby two weeks ago. Secret Oath finished fourth 15 days after winning the Kentucky Oaks.

Early Voting, a son of Gun Runner, won for the third time in four career races to take the $900,000 winner’s share of the $1.65 million purse. Asmussen said, “Early Voting is the winner of the Preakness and deserves all the credit for doing so — and nothing but.”

The 147th edition of the Preakness took place in near-record heat with the temperature soaring to 90 when the horses left the starting gate.