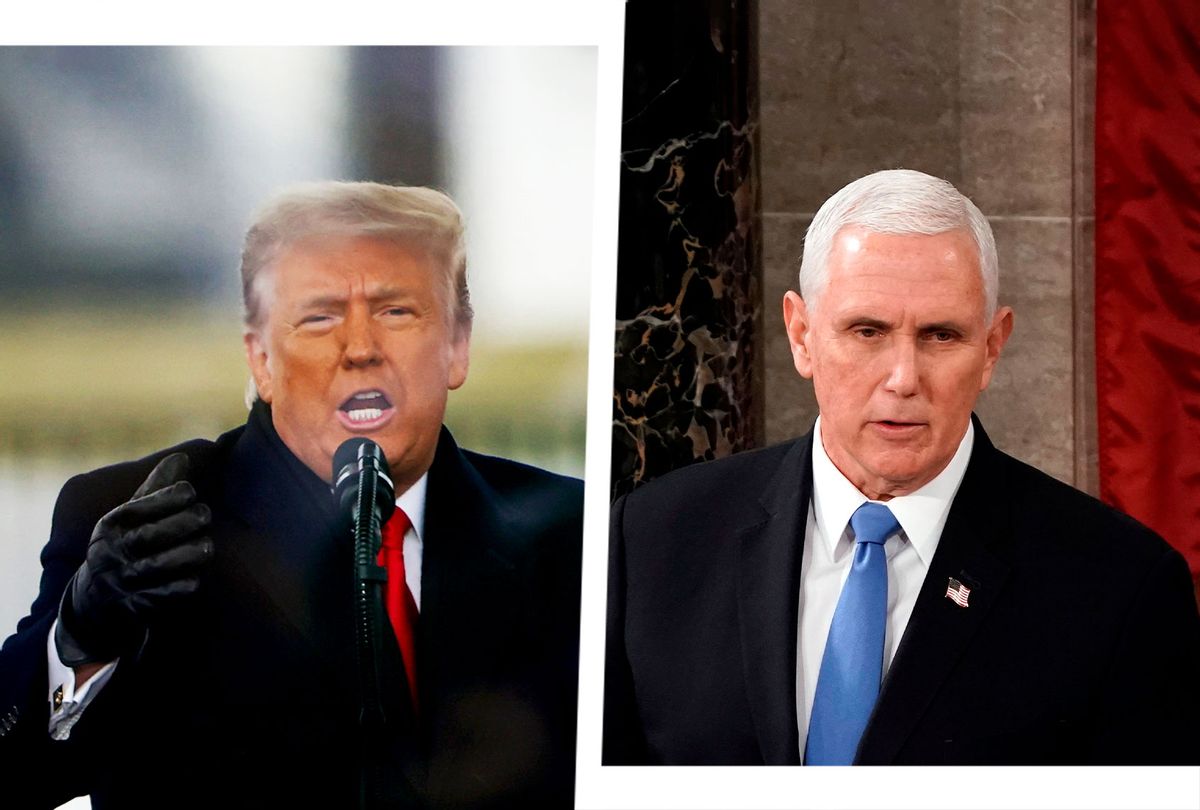 Former Vice President Mike Pence over the weekend called former President Donald Trump’s rhetoric “reckless” and said Trump’s speech ahead of the Jan. 6 Capitol riot “endangered” him and his family.

Trump repeatedly refused to call off the mob of supporters attacking the Capitol and at one point tweeted that Pence “didn’t have the courage to do what should’ve been done” as he pushed a legally dubious scheme to block the certification of his loss and try to steal the election.

“I turned to my daughter who was standing nearby,” he said. “And I said, ‘It doesn’t take courage to break the law. It takes courage to uphold the law.’ The president’s words were reckless. It’s clear he decided to be part of the problem.”

“The president’s words that day at the rally endangered me and my family and everyone at the Capitol building,” he added.

Pence during the Capitol riot spoke with military and Justice Department leaders in an effort to quell the riot.

“Where was the president during all this?” Muir asked.

“David, I was at the Capitol. I wasn’t at the White House,” Pence said. “I can’t account for what the president was doing that day. I was at a loading dock in the Capitol where a riot was taking place.”

“But why wasn’t he making these calls?” Muir pressed.

“That’d be a good question for him,” Pence replied.

The interview was part of Pence’s media tour to promote his new book “So Help Me God.” Pence wrote that Trump complained he was “too honest” when Pence balked at the idea that he could unilaterally block the certification of the election on Jan. 6 and detailed the former president’s efforts to pressure him, according to excerpts published by The New York Times.

Pence also wrote that Trump worked with conservative lawyer John Eastman to pressure him into a scheme that has landed both men under legal scrutiny.

“You’ll go down as a wimp,” Trump told Pence the morning of Jan.6, according to the book. “If you do that, I made a big mistake five years ago!”

Pence also penned a Wall Street Journal op-ed last week as he attempts to rebrand as a hero of Jan. 6, detailing his communications with Trump before and after the riot.

“Were you scared?” Pence recalled Trump asking days after the riot.

“‘No,’ I replied, ‘I was angry. You and I had our differences that day, Mr. President, and seeing those people tearing up the Capitol infuriated me,” Pence said he told Trump.

While Pence has increasingly spoken publicly about Jan. 6 to promote his book, the former veep has been reluctant to sit for an interview with the House Jan. 6 committee and has privately complained about the panel, according to The New York Times.

Pence’s book and other public statements could be of interest to both the Justice Department and the Jan. 6 committee, wrote MSNBC legal analyst Lisa Rubin, “which could intersperse Pence’s written statement with witnesses’ testimony about the same events in its final report.”

“Something tells me that one or more lawyers in the O’Neill building will be furiously flipping pages,” she wrote, referring to the building where the committee works.

NYU Law Professor Ryan Goodman agreed that the committee report could reference Pence’s statements but the “DOJ has little choice but to interview Pence.”

Other legal observers hammered Pence for speaking up to sell his book but failing to speak to investigators seeking accountability for the Jan. 6 attack.

“Not a real profile in courage here from Mike Pence should have voluntarily given this interview to the Jan 6 [committee] at first light,” tweeted former U.S. Attorney Joyce White Vance. “He’s doing it now to try & resurrect a political career, but he wouldn’t do it for the right reasons earlier, when it could have made a difference.”