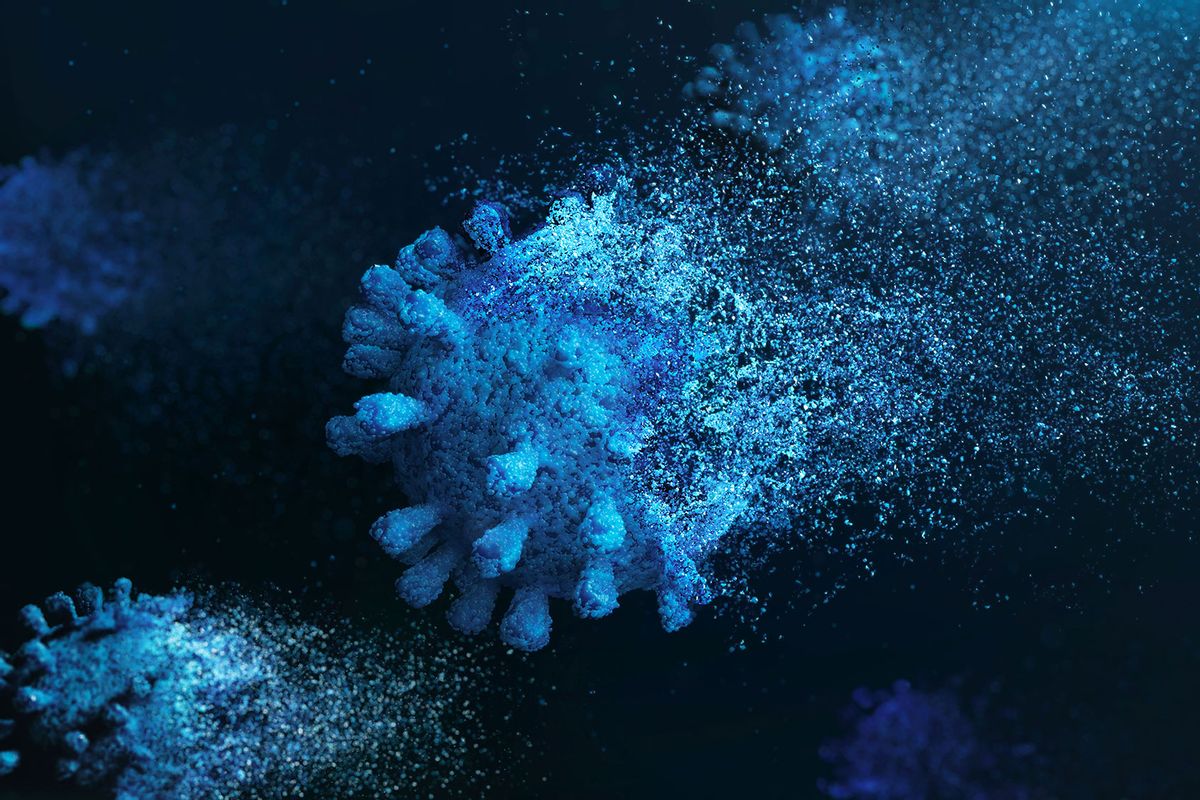 These offshoots, known as recombinants, can be more contagious — better at evading immunity and often better at overcoming certain medications. Obviously, this poses a great menace to hospitals and doctors’ offices, which are staring down a triple threat this winter as cases of flu, respiratory syncytial virus (RSV) and COVID surge as temperatures fall.

While these recombinants are so far rare and may disappear not long after being detected, they still pose a major threat for as long as they spread and continue to exist. Some have taken to calling these variants “Deltacrons,” as in an amalgam of “delta” and “omicron.” But what exactly are recombinants, and how worried should folks be?

“‘Deltacron’ variants are recombinants between a delta and one of the omicron variants. They’ve happened previously, but the issue now is that there are lots of omicrons out there that could recombine,” Dr. T. Ryan Gregory, an evolutionary and genome biologist at the University of Guelph in Canada, told Salon. “Delta is thought to have been more virulent, but omicrons are more transmissible [and] immune-escaping. So the ‘worst of both worlds’ (from the human standpoint) is delta severity and omicron transmission.”

“That isn’t necessarily how it would go, of course,” Gregory added. “There could be delta’s transmissibility and omicron’s severity — but we likely won’t see that because it won’t outcompete other omicron variants.”

“The thing that worries me the most [is that] recombinants are picking up additional mutations.”

In other words, these types of recombinants might combine the worst elements of both strains. The highly contagious delta variant comprised nearly all COVID-19 infections from July 2021 all the way through November 2021, according to the Centers for Disease Control and Prevention. That strain was more likely to hospitalize its victims, according to studies. Then, beginning in December 2021, omicron usurped omicron to become over 90 percent of all infections. The omicron variant and its sub-variant offspring appeared to be more contagious than delta, but did not seem significantly deadlier, according to some studies.

“The thing that worries me the most [is that] recombinants are picking up additional mutations — not just Deltacrons. Omicron-Omicron recombinants are worrisome, too,” Dr. Rajendram Rajnarayanan, an assistant dean of research and associate professor at the New York Institute of Technology campus in Jonesboro, Arkansas, told Salon. He describes some of these differences as a “variant sandwich with the same extra toppings.”

As multiple strange variants emerge, public health experts have been wondering for months: why haven’t we seen a new variant? Slated to be dubbed “pi,” this would be the Greek letter given to a new, troublesome SARS-2 variant that is genetically distinct from previous iterations. The World Health Organization has a system using Greek letters for naming “variants of concern,” but hasn’t given such a name to anything since omicron was detected in November 2021.

The virus is still mutating, however, and its many offshoots are given confusing names with strings of numbers and letters. Recombinant strains are named XBF and XBB, for example. Some, like Dr. Peter Hotez, who co-directs the Center for Vaccine Development at Texas Children’s Hospital, have even taken to calling these the “Scrabble variants,” because B, Q and X are high-scoring letters in the popular board game. Gregory has proposed a list of nicknames for these offshoots to make remembering these names easier. BQ.1.1 is Cerberus, for example, while XBB is Gryphon.

The reason there are so many different spawns of SARS-CoV-2 is because viruses aren’t exactly graceful when they reproduce. When the virus worms its way into cells, it hijacks their genetic code, causing them to short circuit and begin making more viruses. These newborn viruses build up until they burst out of the cell, killing it, and spread out to do more damage.

But each of these copies is made somewhat sloppily — hence, mistakes, or mutations, occur regularly. Once in a while, a mutation will give a virus an advantage, making it better at entering cells, evading immune system defenses or spreading to other people. More often than not, a random mutations works against the virus’s best interest — but if a change turns out to be a disadvantage (good news for humans), then it’s unlikely the weaker virus will keep proliferating.

Some viruses change slowly, but SARS-2 mutates extremely fast. And each new infection gives it ample opportunity to develop new mutations, which may or may not help it do what wants: keep spreading and reproducing. Scientists have been monitoring for these mutations since the beginning of the pandemic and a few, such as the omicron strain, have become serious problems.

But what happens if someone gets two different strains of the virus at the same time? In that case, the viruses can trade genetic information, not unlike neighbors sharing recipes. There are no hard and fast rules saying recombinant strains are better or worse than other strains, but they can pose a unique problem nonetheless.

“If we think of the omicron variant as a family tree, BA.2 (the dominant strain in the UK in spring of 2022) is the parent of BA.5 (the variant currently dominant in the UK) and the grandparent of BQ.1. In other words, BQ.1 is a sub-lineage of BA.5.,” Victoria Easton a virology research and teaching fellow at the University of Leeds’ School of Molecular and Cellular Biology, wrote in The Conversation. “XBB is a hybrid of two omicron BA.2 lineages, BA.2.10.1 and BA.2.75. This makes XBB another grandchild of BA.2. XBB and BQ.1 are therefore cousins.”

The good news is that recombinant variants are, so far, not making up a big proportion of cases in the U.S. The latest data from the Centers for Disease Control and Prevention indicate that Typhon (BQ.1) and Cerberus (BQ.1.1) are making up more than 40 percent of cases, but recombinants like Gryphon (XBB) are still very low. They are clustered together in the “Other” category, which is an estimated 2 percent of cases.

The bad news is that emerging data (which has yet to be peer-reviewed) suggests Cerberus and Typhon are much better at escaping immunity either from vaccination or previous infections, at least compared to BA.5. That means people could still get sick, although some experts hope that infections this year may be slightly less severe.

“We are hoping that the amount of immunity that has been induced either by prior infection or by vaccination” will protect most people from getting severely ill or dying, Dr. Anthony Fauci, the White House medical advisor, told NPR. But that’s a hope, not a fact, and most of those who have suffered through long COVID would not consider it a “mild” infection.

Emerging data suggests some of these recombinant variants can evade immunity, both from vaccines and previous COVID infections, too.

Late last month, the WHO estimated that Gryphon has been detected in more than 35 countries, with Singapore and India being hit hardest, though it only had a global prevalence of 1.3 percent.

“While further studies are needed, the current data do not suggest there are substantial differences in disease severity for XBB* infections,” the WHO warned. “There is, however, early evidence pointing at a higher reinfection risk, as compared to other circulating Omicron sublineages.”

Other emerging data suggests some of these recombinant variants can evade immunity, both from vaccines and previous COVID infections, too. And as a “variant soup” threatens to simultaneously drive multiple COVID waves this winter, that gives more opportunity for recombinants to emerge and perhaps dominate.

“The XBB variant is a recombinant between two BA.2 lineage variants (i.e., two omicron variants) and was successful in Singapore,” Gregory said. “A Deltacron that combined the immune-escape of XBB or BQ.1/BQ.1.1 and the virulence of delta could be quite concerning.”

SARS-2 will keep mutating, which is expected, but our core defenses — what virologist Ian Mackay calls the “Swiss cheese model” of pandemic defense — will remain about the same. Masks and good indoor ventilation will protect against the virus, no matter how many mutations it goes through. Vaccines, monoclonal antibodies and drugs like Paxlovid may be slightly blunted by certain subsequent mutations, but they aren’t totally useless either and are still better than nothing.

It is still strongly recommended that everyone gets a booster shot. Any way we can squash opportunities for the virus to reproduce, potentially churning out more evasive strains, is a good way to slow this pandemic from becoming worse.