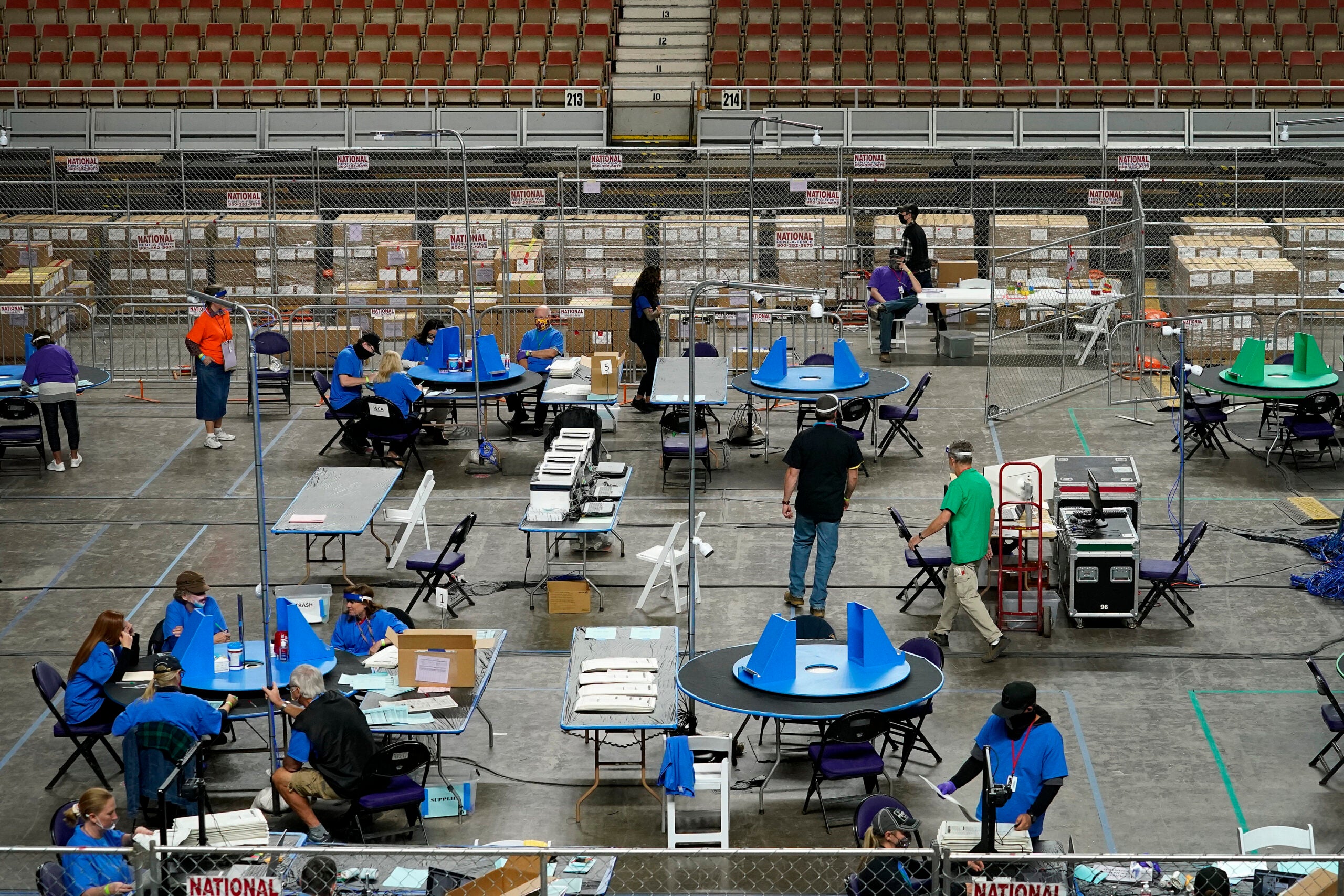 PHOENIX (AP) — The two Republicans who control the elected board in a rural Arizona county have sued their own elections director to force her to conduct a greatly expanded hand-count of ballots cast in the Nov. 8 elections, a standoff that could affect certification of the results.

They want Cochise County Elections Director Lisa Marra to hand over the roughly 12,000 ballots cast on Election Day to the county recorder, an elected Republican. The elected county prosecutor warned the private lawyers representing the two GOP board members that taking ballots without authorization could subject their clients to felony charges.

At a raucous board meeting Tuesday, several members of the public berated the two Republicans on the three-member board for pursuing the hand-count and seeking to pay for the case with county funds. One called a board member a “demagogue” who is “making a disgusting sham” of the democratic process.

The push to hand-count ballots in the Republican-heavy county in the state’s southeast corner, which is home to the iconic Old West town of Tombstone, gained impetus from false claims by former President Donald Trump and his allies of widespread fraud and voting machine conspiracy theories in the last presidential contest. There has been no evidence of widespread fraud or manipulation of voting machines in 2020 or during this year’s midterm elections.

Nevertheless, the conspiracy theories have spread widely and prompted heated public meetings in mostly rural counties throughout the West amid calls to ditch voting machines in favor of paper ballots and full hand-counts. The controversies nearly delayed certification of primary results earlier this year in one New Mexico county and have fed an ongoing legal battle over a full hand-count in a Nevada county.

Republicans in Arizona lost the major races in this year’s election, including for U.S. Senate, governor and secretary of state. Arizona’s evolution into a political battleground has angered many conservatives in a state traditionally seen as staunchly Republican. In Cochise County, the Republican candidates for those posts won by wide margins.

The Republicans’ lawsuit, filed late Monday, comes a week after a judge blocked the board from hand-counting all ballots cast during early voting but also gave them space to pursue a wider hand-count. The judge said state law allows the county to expand the small hand-count used for the official audit that is designed to confirm the accuracy of vote-counting machines, provided it’s done randomly.

After the ruling, Republican board member board Peggy Judd proposed an expansion of the hand-count to as many as 99% of the Election Day ballots, although that proposal has now been slightly trimmed. The lawsuit filed by attorneys for Judd and the other GOP board member, Tom Crosby, said they hope to hand-count four races on all ballots from 16 of the county’s 17 vote centers.

Their lawsuit against the county elections director says she refused their order to either conduct the expanded count herself or hand the ballots over to Republican county Recorder David Stevens so he can do the tally. It seeks an order compelling her to turn over the ballots.

Upping the stakes, the lawsuit contends the Republican board members have concluded that the expanded hand-count is “necessary to ensure completeness and accuracy before certifying the election.” The county’s certified results must be received by the secretary of state no later than Nov. 28.

That means time is short to get a court ruling, pull about 12,000 Election Day ballots from the director’s possession and gather the more than 200 volunteers Stevens has said he is ready to do the hand-count. Another 32,000 ballots were cast early.

If the county misses the certification deadline, the secretary of state’s office or a candidate could go to court and ask a judge to force the board to certify the results. The deadline is in state law, and election rules based on that law say county officials must certify and cannot change the results.

The Pima County judge who heard heard the previous case because local judges declared a conflict will also consider the new lawsuit. Judge Casey McGinley set a daylong hearing for this coming Friday.

The lawsuit also says Republican County Attorney Brian McIntyre “has made clear that he will prosecute any attempt by the Board and Recorder to exercise their lawful authority to take custody of the ballots to complete an expanded hand-count themselves.”

McIntyre has repeatedly told the board in recent weeks that their efforts would be illegal, as has Secretary of State Katie Hobbs, the state’s top elections officer and Democratic governor-elect. Republican Attorney General Mark Brnovich, however, issued an informal opinion backing the board.

An attorney for Marra said Tuesday her client had not been formally served but that she was just beginning to review the lawsuit. A formal response would likely come soon.

Marra conducted the required hand-count audit on Saturday, as did other counties across the state. Those audits choose a sample of both Election Day and early ballots. Bipartisan teams of volunteers provided by the chairs of the county Democratic and Republican parties count four races — five in a presidential election year.