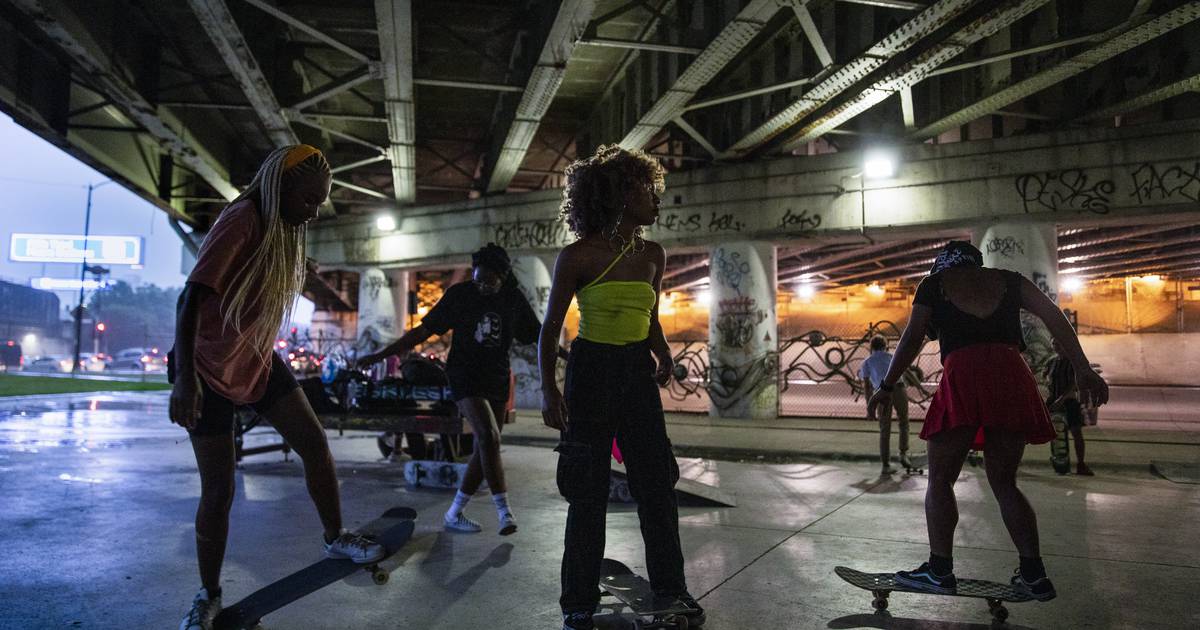 Three years. That’s how long it’s been since members of the froSkate community rolled onto the Chicago’s skateboarding landscape with skatepark meetups for BIPOC femme, queer, trans and nonbinary people to learn the sport among one another. Now the skate crew has its own shoe coming out this weekend — their first collaboration — and it’s with Nike SB.

The project began about 18 months ago according to froSkate founder/CEO Karlie Thornton. Nike SB approached the collective to design a shoe that was a celebration of those who haven’t always felt seen. Designed by Thornton and froSkate vice president L Brew, the “All Love. No Hate” Dunk High will be available in local skate shops around the world on Saturday and available for purchase on the SNKRS app Aug. 24.

Thornton, a St. Louis native, wanted to learn how to skate, and came together with friends to bring the concept of froSkate to fruition in spring 2019. The group has been supporting beginning and intermediate gender-diverse skaters ever since with free gatherings at skateparks where camaraderie and representation are front and center.

The skating collective’s mission is about inclusion and encouragement. Skaters just show up at a meetup with or without a board and are welcomed into the fold. When it began, the skating sisterhood pulled in dozens of skaters at each gathering. Since then, it’s grown in numbers and programming — froSkate has merchandise in local stores, froSkate has shared its voice and solidarity in local protests and froSkate hosts events like group trips, movie nights, and Friendsgivings.

“One of the key reasons we wanted to support froSkate with this shoe is their unique mission,” said Kelly Bird, global brand manager of Nike SB, in a statement. “Thornton and Brew are committed to increasing representation and providing resources for communities typically unseen in mainstream skateboarding media.”

“We are thrilled with Nike’s support and commitment to creating opportunities for young, ambitious black and brown folks with collaborations like this,” Brew said in a statement. “More companies should follow Nike’s example. All industries should amplify the livelihood of BIPOC, LGBTQIA+ and non-cis male individuals.”

We caught up with Thornton on the eve of the shoe drop to hear about the growth of the Chicago crew, which has gotten “a lot of attention and momentum so fast.” Thornton was in the process of sending out invites and putting together boxes of exclusive froSkate merchandise for skate shops in the U.S. and Canada to coincide with the weekend events. The interview has been condensed and edited.

Q: How did Nike SB reach out to froSkate?

A: In an email. We had no idea if it was real or not. We were like, “Is this spam?” (Laughs.) I had to check in with some friends. We set up a meeting with them and we got on a call and it was a whole team of people. They all had Nike emails. I was like, “OK, are y’all serious? Us? Did you get the right organization?” But they wanted to work with us. At the time, we didn’t know how big this was going to be. It wasn’t until months later that we realized this is a global, real-deal thing.

Q: How did froSkate design the shoe?

A: It was definitely a team effort design. It was so funny because when we first started working on this shoe toward the end of 2020, beginning of 2021, we had no brand identity at all. We were still figuring out our logos; we had no colors, no font; everything was all over the place. Working on the shoe really challenged us to get our brand identity together. Who is froSkate? What energy do we have? We really were able to work with the design team myself, and L. Brew, our Illustrator Emma Orhun and O.J. Hays. They were all able to help us. The whole (Nike) team helped us to hone in on what the story of our shoe would look like. We wanted to keep it creative. We wanted to keep it gender neutral. And we also wanted to give it that kind of extra flair and style that Black and brown folks just carry within them — that’s incorporated throughout all the panels on the shoes, including the chant repetition of “all love, no hate.” The aglets are gold because we wanted to incorporate how beautiful gold jewelry looks on Black and brown skin regardless of what you’re wearing. It took us over a year to get to where it is. We’re very proud of it.

Q: What lessons have you learned since froSkate began?

A: I’ve learned how to make better safe spaces for all kinds of people. That’s definitely something that you need to work on as a community builder. And make sure that you are bettering yourself, that you’re able to look at yourself and see where you’ve gone wrong and be able to fix that, and just set your ego aside. Now, this is so much bigger than you. That’s something that I’ve been learning is how to truly listen and prioritizing self-care more, trying to take better care of myself so that I can take better care of other people as well.

A: Yes, if we can get some money. Who wants to donate to sponsor our tour? It’s my dream to take us on an international tour next year: Japan, Ghana — to visit our friends at SurfGhana — or Toronto, Canada. We have friends all over the world. I would love to visit them.

Q: You have your own shoe. What else is on the horizon for froSkate?

A: We don’t really know. We’ve been focusing so hard on getting this right. It’s pretty surreal because our first official collaboration is with people’s dream No. 1 collaboration ever. We’re really excited about the work that we’re going to be doing as far as continuing to do our programming, now that we have more eyes on us, to be able to expand it and do some of our wildest dreams. We’re more so excited about the future of froSkate and to not have to depend on brand partnerships to make our voice be heard. We want to stand on our own and be able to be that microphone for ourselves. And for other people, too.

FroSkate will be doing a pop-up shop and meet-and-greet Saturday at Uprise Skateshop, 1820 N. Milwaukee Ave. FroSkate merchandise and raffle codes to buy the shoe will be available noon to 7 p.m. FroSkate will host a skate meetup 2-7 p.m. Sunday at Burnham Skate Park, 3400 S. DuSable Lake Shore Drive, and an after party 9 p.m. to midnight at Reggie’s Chicago, 2105 S. State St.. More information is at froSkate’s website, Facebook and Twitter.