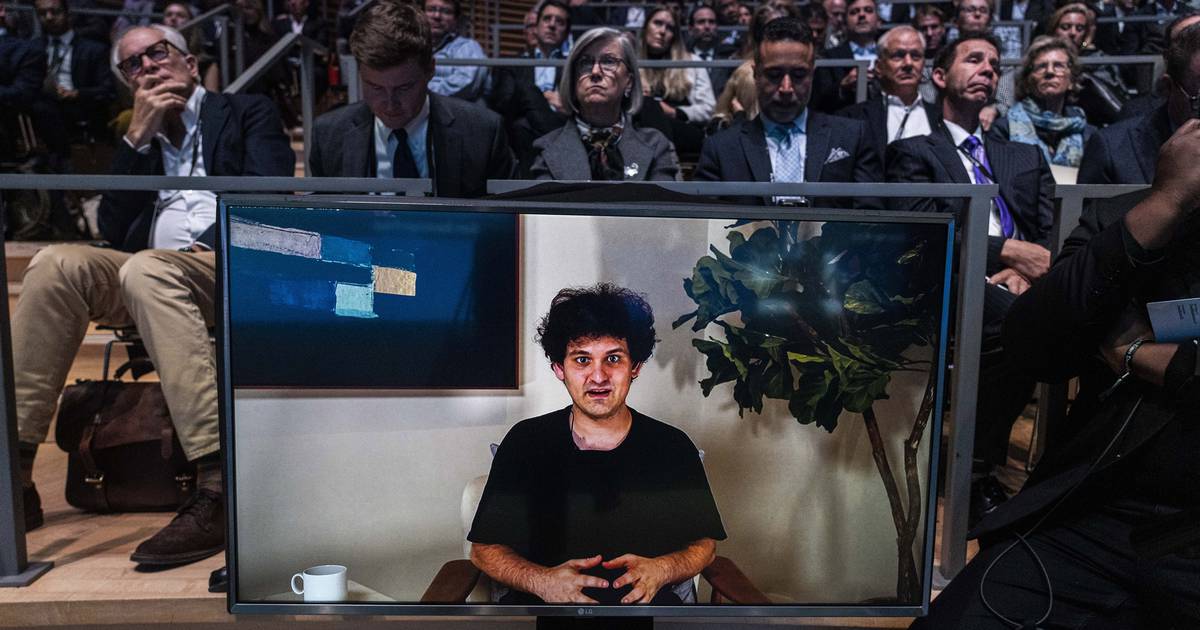 When the FTX.US headquarters opened in a gleaming new Fulton Market tower in May, Mayor Lori Lightfoot and her retinue stopped by to officially welcome the cryptocurrency exchange to Chicago, a city positioning itself as a financial center for the booming digital assets.

It was supposed to be the start of something big.

The Chicago office was christened as the inaugural home to the U.S. trading platform for Bahamas-based FTX, a startup that had rocketed into a $32 billion global cryptocurrency exchange and the poster child for Bitcoin bravado. Six months later, FTX imploded in a massive bankruptcy and Chicago’s would-be crypto flagship was just another empty office.

“There’s no way to spin that this was good for the industry,” said Ben Weiss, 27, CEO of CoinFlip, a Chicago-based Bitcoin ATM operator and one of the city’s leading crypto companies.

The unfolding story of FTX’s precipitous downfall and alleged misuse of customer funds has shaken the nascent cryptocurrency industry to its digital asset core. The Chicago chapter is more about what didn’t happen.

FTX was launched in 2019 by Sam Bankman-Fried, a mop-haired millennial who parlayed an MIT degree and a brief run on Wall Street into one of the largest global cryptocurrency exchanges. Based offshore, FTX was able to bypass U.S. futures restrictions and offer a range of leveraged derivatives, generating huge trading volume amid volatile crypto price swings.

Bankman-Fried also marketed FTX into the mainstream with stadium naming rights deals, advertising campaigns and a high-profile Washington, D.C., lobbying effort. FTX made a splash with a Super Bowl TV commercial in February urging viewers: Don’t be like comedian Larry David, who dismissed crypto as the next big thing.

“I don’t think so,” said David, ostensibly playing the fool.

But FTX unraveled quickly when a run on deposits and cratering crypto prices left it with an $8 billion shortfall, forcing Bankman-Fried to resign and the firm to file for Chapter 11 bankruptcy Nov. 11. Investor assets were frozen and regulators are investigating whether FTX improperly used customer funds to cover losing positions at co-owned trading firm Alameda Research.

FTX generated $3.45 trillion in global trading volume this year, while FTX.US hit $65 billion before both exchanges came to a mandated halt in November, according to Nomics, a leading cryptocurrency index.

A U.S.-regulated exchange, FTX.US offered fewer products than the global exchange, but was the only FTX platform licensed for American investors to trade crypto. Daily trading volume on FTX.US ramped up sixfold this year, while registered users grew from 10,000 to about 1.5 million, according to a source familiar with the operation.

The U.S.-based platform was not part of the massive liquidity crunch that brought down the global FTX exchange, according to Bankman-Fried.

“To my knowledge, that’s fully solvent; that’s fully funded,” Bankman-Fried said in a Nov. 30 video interview with The New York Times’s Andrew Ross Sorkin. “I believe that withdrawals could be opened up today, and everyone could be made whole from that and none of these problems plague the U.S. platform.”

Launched in January 2021, FTX.US established Chicago as its headquarters in June of that year, setting up shop in temporary offices after Brett Harrison, a former software developer at Citadel Securities, was named inaugural president of the fledgling U.S. crypto exchange.

The permanent Chicago headquarters officially opened May 10, 2022, at 167 Green Street, a new 17-story Fulton Market office building, with Lightfoot and other Chicago officials on hand to cut the ribbon. FTX.US said it would fill out the 9,000-square-foot space on the 11th floor with 70 employees, but the larger promise was to boost Chicago’s standing as a crypto commerce center.

The company also pledged $1 million to launch a charitable initiative for Black Chicagoans in underserved neighborhoods.

The promises were broken Sept. 27, when Bankman-Fried made two surprise announcements in an email to employees: Harrison was leaving the company and FTX.US was moving from Chicago to Miami — four months after the Fulton Market grand opening.

The announcement came as a shock to about two dozen Chicago-based employees at FTX.US, whose jobs were essentially shifted to move it or lose it mode.

“I think a lot of people were blindsided at FTX, partners of FTX, people in the industry,” said Paul Hsu, 47, founder and CEO of Decasonic, a Chicago-based venture capital fund focused on blockchain innovation — the backbone of cryptocurrency technology.

Decasonic was based until recently in the same building where FTX.US was located, and Hsu spoke at the opening of the crypto exchange office in May.

While Bankman-Fried invited Harrison to head the U.S. trading platform, the lack of a formal management structure at FTX and a resistance to allowing the Chicago office to staff up ultimately fractured the working relationship, sources said.

Sources said Harrison’s departure from FTX.US was months in the works, with plans to start his own Chicago-based crypto firm.

When the Chicago office closed at the end of October, several employees had already moved to Miami, where the new FTX.US offices were set to open, a short hop from the parent company’s Bahamian enclave. FTX had established a high-profile presence in Miami, with its logo emblazoned on the NBA Heat’s arena through a 19-year naming-rights deal.

But a number of FTX.US employees were reluctant to take their talents to Miami, dragging their feet and exploring outside job opportunities, sources said. Within days, FTX would collapse, leaving a handful of early Chicago movers in Miami and out of a job.

“We have our portfolio companies looking through FTX.US alumni,” Hsu said. “We’ve seen some resumes come in for our job roles at Decasonic.”

The Miami move and subsequent bankruptcy also left the FTX.US charitable initiative with Equity and Transformation, a 12-month pilot program to give $500 per month to 100 formerly incarcerated Chicagoans in underserved neighborhoods, only partially funded and unable to launch this fall as planned.

Richard Wallace, founder and executive director of the nonprofit Chicago-based Equity and Transformation, did not respond to a request for comment, but the city said it is trying to find a new funding source.

“While the City currently has no role in the administration or funding of EAT’s program, with the news of FTX’s bankruptcy filing, the City is supporting EAT’s efforts to secure alternate funding for this important program so they can serve the returning residents who were selected to participate,” Kate Lefurgy, a spokeswoman for the mayor’s office, said in a statement.

With little regulation and no backing other than the faith of its fervent believers, cryptocurrency has taken investors on a wild ride during the pandemic.

Launched in 2009 by anonymous computer developers, Bitcoin operates on a decentralized peer-to-peer payment network. While there is no central bank, the encrypted digital transactions are verified by blockchain technology, a type of database that forms a permanent ledger of all transactions across the shared computer network.

The price of Bitcoin, which reached nearly $69,000 in November 2021, has fallen by 75%, hovering around $17,000 amid what industry analysts are calling a crypto winter, fomenting skepticism among some investors that digital assets have any intrinsic value.

Bitcoin remains the most valuable cryptocurrency, with a market cap of about $330 billion, according to CoinMarketCap, a price-tracking website for cryptoassets. Other major cryptocurrencies include Ethereum and Dogecoin, which was started in 2013 by a pair of software engineers as a joke, and now boasts a market cap of nearly $13 billion.

The total cryptocurrency market cap, which topped $2.8 trillion in November 2021, has fallen to about $854 billion, according to CoinMarketCap.

In 2022, World Business Chicago, the city’s economic development arm, made the fintech industry, including crypto, an area of focus. Last year, investment in Chicago’s fintech ecosystem more than doubled to nearly $4.6 billion, according to March research report issued by the agency.

Michael Fassnacht, president and CEO of World Business Chicago and the city’s chief marketing officer, who was on hand for the May ribbon-cutting at the new FTX.US offices, downplayed the role of the startup exchange in the city’s larger fintech aspirations.

“We didn’t even mention FTX in our research overview,” Fassnacht said in a statement. “We continue to believe that the broader fintech sector has a bright future in Chicagoland.”

At the state level, a bill that would create a special purpose depository trust for digital assets, providing a regulatory framework for banks and other custodial institutions to hold cryptocurrency accounts for clients, passed the House in April 2021, but stalled in the Senate last fall.

While the city has all but scrubbed FTX from its corporate memory, leading Chicago crypto players are still assessing the fallout from its demise.

The CME broke new ground when it began trading Bitcoin futures in 2017. Despite the crypto winter, the CME has seen an increased interest in trading crypto this year, with average daily volume up 17% over 2021. Some industry analysts believe the CME, one of the world’s largest futures exchanges, may see higher trading volume as investors migrate to a more established platform following the FTX implosion.

Terry Duffy, CME chairman and CEO, said the future of Bitcoin futures remains to be seen.

“Crypto markets are at a critical juncture,” Duffy said in a statement. “While we have seen several positive applications of technologies like blockchain, cryptocurrencies, as an asset class, still need to show their use case beyond just speculative tools. That said, crypto markets continue to have proponents who believe in the idea and the value of digital currencies. Exactly how these markets will continue to develop is yet to be seen.”

Bobby Zagotta, the Chicago-based CEO of Bitstamp USA, a rival cryptocurrency exchange, said FTX brought a lot of new investors into digital assets, but its collapse has set the industry back two years in terms of building trust with the investing public.

A former Kraken executive who previously helped launch Bitcoin futures trading at CME in 2017, Zagotta said more regulations are needed for the crypto industry. For Chicago, the “trading capital of the world,” Zagotta said other companies will be beneficiaries of a “smarter marketplace” in the wake of FTX’s demise.

“In the last two to three years, Chicago has really put itself on the map in terms of being an innovation hub, not just around blockchain or crypto, but around technology in general,” Zagotta said. “We’re all having to kind of reset and be very smart and deliberate about how we build our business from this very public fraud and flameout.”

Founded in 2015, CoinFlip moved into the Old Post Office last year and has about 260 Chicago-area employees. The fast-growing company has flourished during the crypto winter, and is projected to generate $150 million in revenue this year — a 67% increase — through its network of more than 4,000 Bitcoin ATMs across 49 states and Canada, which change cash into Bitcoin.

The collapse at FTX may also benefit the CoinFlip business model, which doesn’t hold customer funds. Weiss advocates “self-custody” of cryptocurrencies in a digital wallet, although there are security risks associated with that as well.

Gina Pieters, an economics lecturer at the University of Chicago and an expert on crypto assets, visited the FTX.US office and met with employees during its brief run in Chicago.

Most people outside the Chicago crypto community, she said, probably didn’t know the FTX.US office was ever based in the city before it abruptly took off for Miami, and its subsequent destination, bankruptcy.

While the FTX.US office was small and short-lived, its sudden demise will nonetheless negatively impact Chicago’s crypto ecosystem, Pieters said.

“I think it’s really hard to disentangle the FTX office in Chicago declaring bankruptcy and the broader implications that has for the city, given that the crypto industry is going to be muted for a while,” she said. “It will be a continuation of the crypto winter.”