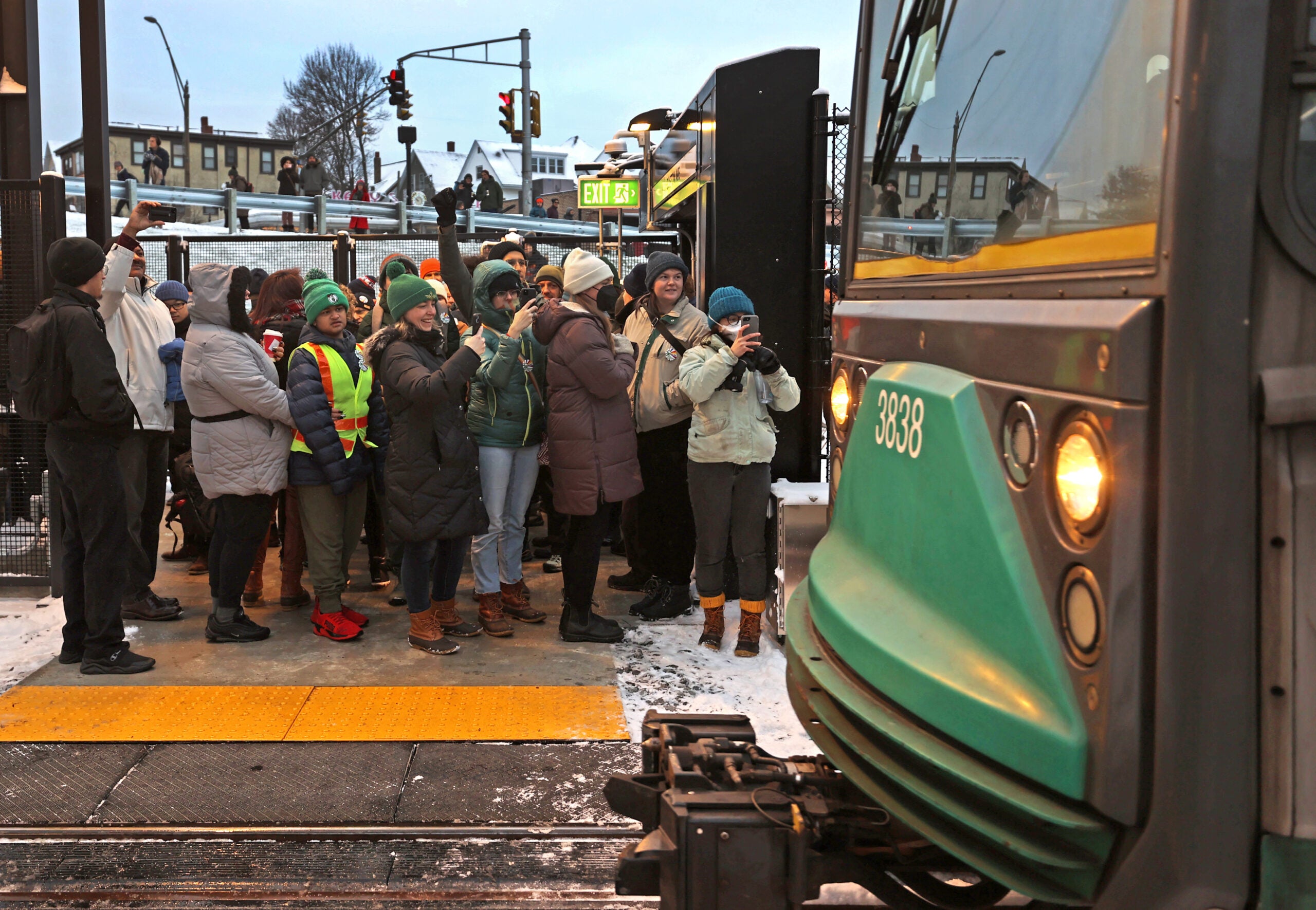 Drawing a crowd to rival this month’s royal visit, the Green Line Extension’s new branch debuted Monday, with transit enthusiasts out in force as the first trolley rumbled into Medford shortly before 5 a.m.

Decades and billions of dollars in the making, the second GLX branch arrived to much fanfare — freezing temperatures and icy conditions notwithstanding.

Riders packed onto the T for the Medford branch’s maiden voyage, prompting MBTA General Manager Steve Poftak to quip, “We’re going to need more trains,” according to The Boston Globe.

“It’s truly an honor to have the T right outside our door,” Tufts University President Anthony Monaco said during an event marking the opening. He said more than 2,000 Tufts employees live in Green Line communities and will now have mass transit access to the college’s campus.

“I think many of you who know the arc of history on this project know that this project came very close to not happening,” he said, recalling “headwinds” that included COVID-related challenges and supply chain issues.

“We as a team were able to get it done, and it gives me great pride to stand here on behalf of the 6,400 employees of the MBTA and bring you this new service,” Poftak added.

Gov. Charlie Baker said that earlier on Monday, the new $250 million vehicle maintenance facility at the end of the line was dedicated to former Rep. Mike Capuano, who secured $1 billion in federal funding to cover about half the GLX cost.

“You can’t build a project like this on good intentions and words,” he said. “You need dollars.”

Baker also said he remembers people talking about the Green Line Extension as far back as the 1980s.

“She asked me that night when she’d get to ride the train,” Ballantyne said. “We know the answer now: ‘When you’re 26.’”

Safe to say @SomervilleCity Mayor @katjballantyne is excited about the Green Line Extension — and so is former Mayor Curtatone!

The band calls this rendition “When the Green Line come rolling in” pic.twitter.com/IIjcain7et

Warren and others who spoke at the event agreed that the Medford branch opening is a milestone for the MBTA, but not a stopping point.

“We need a transportation system that works, and that means planning for the future,” she continued. “We need a T that is cleaned up and runs on time — and yes, Orange Line, I’m looking at you. We need a T that moves people around to more parts of the region.”

Warren added: “Extending the Green Line is great, but we need a lot more extensions, and we can’t wait two decades for every single one of them to come online.”

Sen. Ed Markey echoed Warren’s message that the T still has a ways to go.

“But days like today give me hope,” he said, adding, “The collaboration and tenacity on display here can be the guiding star on our journey ahead as we work together to chart a shining, green future for the T.”

“This is the dawn of a new green era,” Markey said.