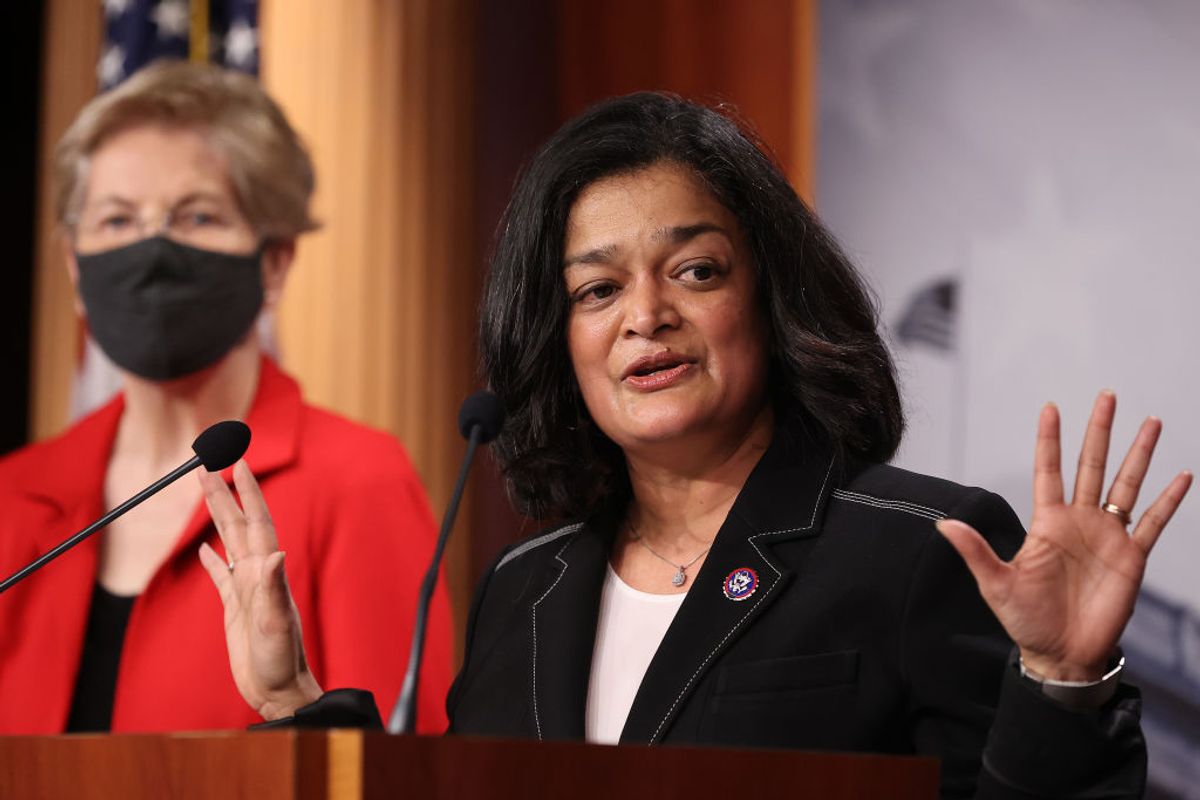 Without the support of a single Republican, Democrats in the U.S. House on Friday gave final passage to a $740 billion piece of legislation that includes historic investments in renewable energy development, a minimum tax on large corporations, and a landmark requirement for Medicare to directly negotiate the prices of a subset of prescription drugs.

Democratic proponents of the bill and outside groups have hailed the Inflation Reduction Act (IRA) as the most significant climate action measure ever passed by U.S. lawmakers, even though the package contains substantial handouts to the fossil fuel industry alongside the slew of tax incentives and subsidies for green energy that could substantially curb greenhouse gas emissions.

The Senate passed the reconciliation bill along party lines last weekend, and Friday’s final vote in the House was 220 to 207, with all Democrats in favor and a “nay” from every single member of the Republican caucus who voted.

“After more than a year of negotiations and even longer campaigning on these issues, the Democratic majority in Congress has unanimously sent a sweeping bill to tackle climate action, tax fairness, and lower drug costs to the President’s desk,” Jayapal said. “Like their Senate colleagues, not a single House Republican voted for this legislation, despite its popularity with the majority of Americans across the political spectrum.”

President Joe Biden is expected to sign the bill into law as soon as Friday evening, capping off more than a year of negotiations that were repeatedly sabotaged by Sens. Joe Manchin (D-W.Va.) and Kyrsten Sinema (D-Ariz.), who succeeded in dramatically scaling back their party’s agenda.

While acknowledging the IRA “is not perfect” given provisions that “that risk expanding fossil fuel extraction and use,” Union of Concerned Scientists president Johanna Chao Kreilick said the IRA is “a game-changer and reason for hope.”

“We finally have a Congress that’s heeding the science on the severity of human-caused climate change and incentivizing the clean energy solutions that are supported by the vast majority of people in the United States,” said Kreilick. “It’s extremely disappointing and alarming that despite the urgency to act, Republican lawmakers have largely refused to support critical climate policy.”

Every member of the Congressional Progressive Caucus voted for the bill despite grassroots climate advocates’ vocal concerns about the legislation’s giveaways to the fossil fuel industry, including a section that requires new oil and gas lease sales as a prerequisite for wind and solar development.

“It is a start, and we have more work to do to fully respond to the cost of living crisis,” said Rep. Jamaal Bowman (D-N.Y.) after the bill’s passage.

“People deserve lower insulin prices and lower drug prices in general, including if you have private health insurance,” Bowman continued. “We need to protect frontline communities from fossil fuel pollution, and finally end our dependence on oil, gas, and coal. Our work continues to deliver affordable, quality housing, child care, and education, a $15 minimum wage, immigration justice, and more. As we celebrate the progress made today, we recommit to addressing every priority in Build Back Better and more.”

During a press conference ahead of Friday’s vote, Rep. Pramila Jayapal (D-Wash.)—chair of the Congressional Progressive Caucus—said the IRA “marks the largest-ever federal investment in climate action, putting the United States back on track to cut carbon pollution by 40% by 2030,” a projection that some climate advocates have questioned given its dependence on the effectiveness of unproven carbon capture technology.

“We’ve got more to do,” Jayapal said on the House floor, pointing to the bill’s exclusion of housing and child care funding. “But today, let’s celebrate this massive investment for the people.”

House Speaker Nancy Pelosi (D-Calif.), for her part, said the IRA takes steps toward “loosening the stranglehold” of corporate interests on Congress.

But the bill in many ways reflects the power that corporate America continues to exert over the legislative process. In addition to the gifts to Big Oil secured by Manchin, the private equity industry—with the help of Sinema—won the last-minute removal of tax provisions targeting the notorious carried interest loophole.

Republicans, given an opening by the unelected Senate parliamentarian, also axed a provision that would have imposed a $35-per-month insulin copay cap for patients with private insurance. The bill still contains an insulin copay cap for Medicare Part D enrollees as well as a $2,000 annual cap on beneficiaries’ prescription drug spending.

Despite regressive late-stage changes to the bill, corporate lobbying groups such as the U.S. Chamber of Commerce mobilized aggressively against the IRA, with particular focus on tanking its drug price provisions and the 15% minimum tax on highly profitable companies.

“The reality is highly profitable corporations can afford to contribute more towards an economy that works for everyone, but many would prefer to keep charging seniors and families whatever they please while paying virtually nothing in return,” Zelnick added. “That is why Congress must finish the job of reining in corporate greed, lowering costs, and ensuring wealthy companies finally pay their fair share.”

Wenonah Hauter, executive director of Food and Water Watch—a group that has been highly critical of the Inflation Reduction Act—said Friday that the bill “takes important steps to promote clean energy, but utterly fails to rein in toxic, destructive fossil fuel extraction.”

“The Inflation Reduction Act can only be seen as the beginning of our response to the climate crisis. Much more is needed, specifically to restrict any and all new fossil fuel projects,” said Hauter. “Unfortunately the bill aims to actually promote additional drilling and fracking, an unconscionable trade-off that will increase pollution in frontline and environmental justice communities.”

“Our focus now must shift to stopping Senator Manchin’s awful ‘side deal’ to fast track fossil fuel permitting,” Hauter added. “This giveaway to big corporate polluters would doom any progress that might result from the passage of this legislation.”