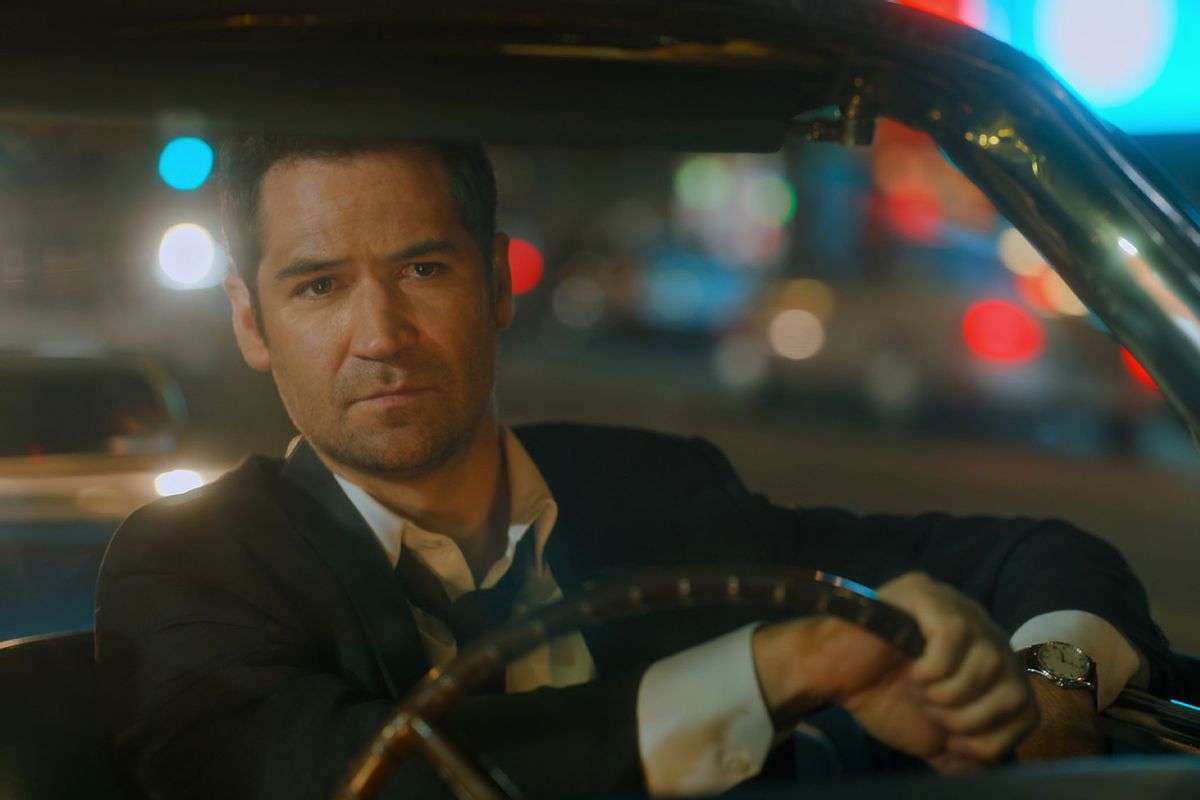 As I, my family and friends wait with bated breath for the return of “Virgin River,” Netflix’s compulsive hit about a nurse who moves to a sleepy Northern California town to start over and ends up starting something with the Luke Danes-esque diner owner, is there an equivalent show with a male protagonist? Netflix’s “The Lincoln Lawyer” might fit the bill.

But wait, the star of “The Lincoln Lawyer,” Mickey Haller (Manuel Garcia-Rulfo) does the work he does because he’s a good guy who knows the justice system is flawed and he wants to do his part to prevent innocent people from being imprisoned. He’s recovering from addiction and has a whole host of supportive friends and colleagues, including Neve Campbell. Sounds like excellent escapism. Is it also a male fantasy?

Mickey has style; he’s got class. He drives (or is driven in; he likes to think in the car and this is LA County, after all) a series of shiny Lincolns — including a 1964 Lincoln Continental convertible — each with vanity license plates with clever quips like NTGUILTY. He has a retro look, as the show does at times, reminiscent of 1950s noir glamour with cuff links, neon, whisky in a glass.

Even his lowest point is stylish.

As a David E. Kelly legal drama, the show centers beautiful people looking beautiful, wearing beautiful clothes and living in beautiful homes; in this case, sweeping and sunny Los Angeles. The series is adapted from a 2005 novel, part of a series by Michael Connelly, a crime writer who sets many of his stories in the City of Angels.

In many ways, Mickey is a throwback to a classic gumshoe, though he’s in front of the jury box. He thinks well on his feet — he has to, given he suddenly has a Filofax of cases he knows nothing about (more on that later). He solves crimes with simple, creative solutions. He makes the work of a defense attorney look easy, casual as the suit jacket he swings over his shoulder.

“The Lincoln Lawyer” first came to the (larger) screen in 2011, in a film adaptation starring Matthew McConaughey. Talk about casual charm. But in the books, as in the Netflix show, Mickey is Mexican American. Garcia-Rulfo is a Mexican actor and this is his first TV lead. He told MetaCritic, when he was in talks for the role, “I said, ‘You guys took the risk of hiring me as a Mexican actor, so let’s take advantage of that. Let’s explore that side of Mickey Haller.’ “

As LatinaMedia.Co writes, “His story is never just about being Chicano, but that is still who he is.” He has a favorite taco place where he brings friends and colleagues. He occasionally speaks Spanish with his daughter (Krista Warner) and with some of his clients.

Garcia-Rulfo’s performance is coolly effective and quietly compelling. He has an understated charm, different from McConaughey but still magnetic. He makes the part his own. Although unflappable, his Mickey seems more human.

You can go to the kitchen for a snack. Things are going to be fine.

Mickey is also struggling with addiction, which is alluded to many times throughout the series but only shown briefly: when he orders alcohol at a bar after a difficult night but doesn’t drink it. Mickey has a lot of help, which is possibly not the most realistic portrayal. Although his past substance abuse is brought up in an attempt to hurt him, he swiftly shuts it down. Even his lowest point is stylish and calm. He sits on a beach, looking out at the ocean. He used to surf but can’t anymore.

Mickey has taken a year away from lawyering to deal with his addiction. And it seems like he dealt with it pretty well. Everyone from his team to the mother of his child (Campbell) is understanding.

Although we’re told his career and finances have suffered, we don’t really see evidence of that. Then opportunity drops in his lap, in a way that usually only happens to certain white men who fall up (and notably, Mickey is not that): Mickey inherits the practice of a very successful, fellow criminal defense lawyer.

Mickey is an idealist, now with a nice cash flow. He balances a smorgasbord of new clients with typical ease. And sure, the lawyer who willed Mickey a practice was murdered – but remember, this is “Virgin River” for dads. It’s cozy, not chilling. You can go to the kitchen for a snack. Things are going to be fine.

Mickey has some predictable thorniness with his tween daughter, but it’s fleeting. Overall, they have an excellent relationship, much better than most divorced dads on TV or otherwise. He shows up almost exactly when he says he’s going to. She usually wants to spend time with him. They have tacos; he explains to her the importance of his work — and she gets it.

In perhaps the most fantastical aspect of “The Lincoln Lawyer,” Mickey is friends with his two ex-wives. He’s friends with the boyfriend of one of his ex-wives, Angus Sampson as the gruffly charming investigator Cisco who roars around LA County on his motorcycle like a sensitive Meat Loaf. Mickey works with his second ex-wife, the capable Lorna (Becki Newton, who glows with likability), who basically held down his business even when it wasn’t much of a business. As with his daughter, Mickey has a good relationship with his daughter’s mother, his first ex-wife (Campbell), another lawyer. They communicate well, help each other out and are (usually) there for each other.

Both ex-wives are a constant presence in his life. As he tells Cisco, they’re two of the most important people in his life.

With few responsibilities, he’s the definition of the casual male.

Is that a good idea? Most relationship experts say that depends on the motivation behind wanting a friendship. Hoping to rekindle the romance someday is not a good answer, especially if your ex has a new romantic partner. As InStyle wrote, “If you cannot honestly answer that you would be comfortable hanging out with them both, and truly happy your ex had met someone, you should not be hanging out.”

So, maybe Mickey shouldn’t be calling Campbell’s Maggie more than he needs to for co-parenting reasons.

A final interesting part of the fantasy that is “The Lincoln Lawyer”? Except for predictable sparks (but no fire) with ex-wife Maggie, Mickey doesn’t have a romance, unusual for a leading man in a show, yet part of the features of his character: easygoing, no pressure, no strings. With few responsibilities, he’s the definition of the casual male. Solo, unattached, he rides into the sunset. Or, surfs into it. Is it realistic? Who cares. It’s fun.

“The Lincoln Lawyer” is currently streaming on Netflix. Watch a trailer via YouTube.

More stories with style and class