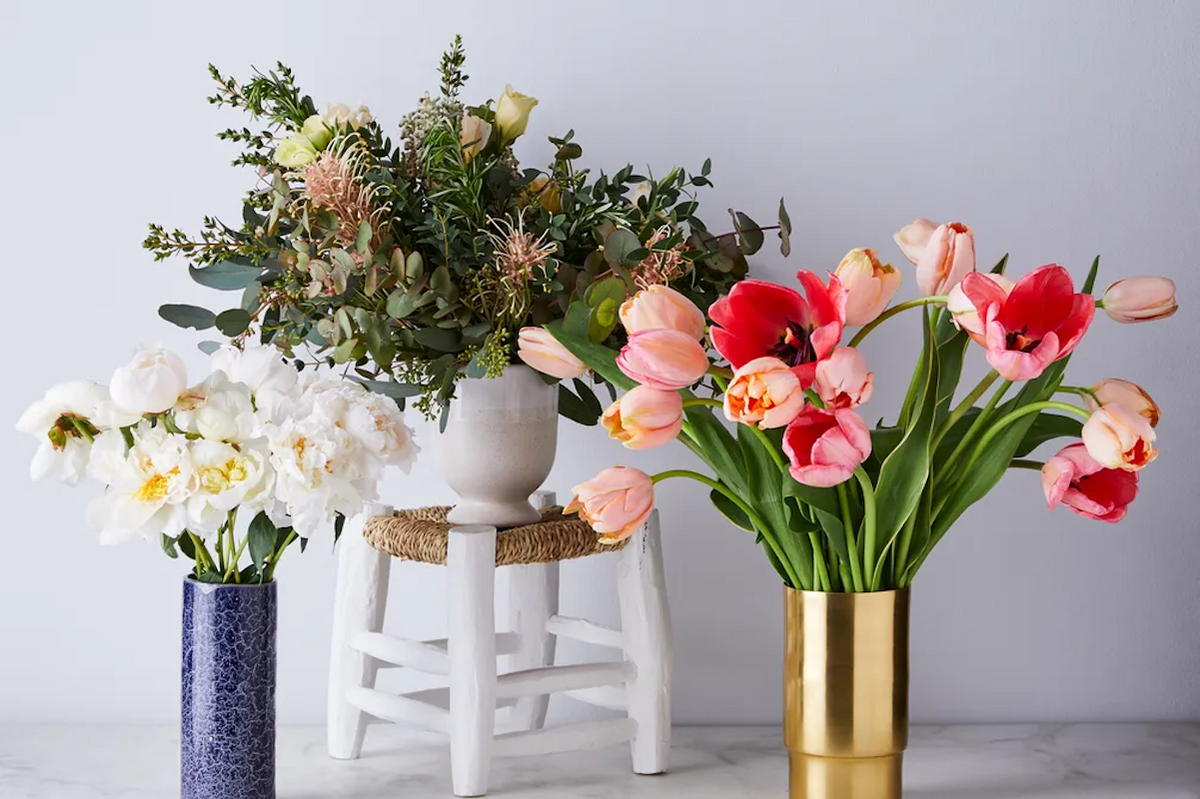 There’s no denying the instant boost that fresh flowers can give to any room. Be it a generous arrangement you’re lucky enough to receive, or a bunch you grabbed from Trader Joe’s, flowers — or even just leafy stems, for that matter — can make any room feel warm and inviting.

But there’s also something deeply upsetting about tossing a wilted bouquet; it always feels like it was just yesterday that you were fluffing up your still-closed ranunculus, and suddenly they’re stinking up the kitchen with their funky water. So, how does one go about keeping pretty blooms alive for more than a few days?

Below, Christina Stembel, founder of Farmgirl Flowers shares her best tips for extending the life of your stems, along with her homemade flower food recipe — much like the little packets that come with a bouquet.

First things first: “We strongly recommend using either a dark glass vase or ceramic vessel,” says Stembel. “Darker glass or ceramics won’t allow sunlight into the water, which can increase the rate at which the stems decay.” Sure, mason jars are adorable, but if you’re planning on displaying the bouquet where the indirect sun hits, go for a darker vessel.

“When we first started making flower food, we followed an older recipe from Martha Stewart (the queen!),” Stembel says. “Since then, we’ve made a few tweaks to suit our production and the ingredients we have on hand.” Farmgirl’s industrial formula is: 1 gallon of water + 4 teaspoons bleach + 4 teaspoons vinegar + 4 tablespoons sugar. To scale that down for your own bouquet, go with 1 quart water, 1 teaspoon bleach, 1 teaspoon vinegar, and 1 tablespoon sugar.

Bear in mind, according to Stembel, “The truth is, flower food is most effective for flowers that are fresh cut.” But as the flowers age, they still get a boost from this DIY food and the bleach component also helps to kill bacteria. Some people even use Sprite or other clear sodas as sugary flower food. If you take this route, Stembel still recommends a little bleach (in the same proportions as earlier stated), but with one-part clear soda to three-parts water. Don’t use diet soda because there’s no sugar and make sure it’s a clear variety, like Sprite. Colas or even ginger ale won’t work for this!

Keeping stems fresh ensures they can most effectively absorb water. Stems should be trimmed at least half an inch when they first come home with sharp, clean clippers and plopped back in the water immediately. Once cut, the stems will begin to seal up. “Delaying putting them in the vase will inhibit their ability to hydrate properly,” Stembel warns.

4. Keep flowers in a cool location

Keeping your flowers out of extreme conditions (like super-hot window sills) will prevent them from dying faster and creating build up and bacteria in the vase. Most flowers prefer cool, shady spots, so keep them away from the radiator in the winter, too.

Just like humans, flowers don’t thrive when they’re drinking stagnant, dirty water. Daily water changes flush out any bacteria that flowers are sitting in, and they also eliminate any odor that comes with rotting plants.

6. Remove any stems as they die

Pruning dead stems will remove sources of excessive bacteria since decaying flowers release bacteria into the water faster than fresh stems. You should also remove any leaves that fall below the waterline each time you change the water.

It’s important to do this after removing a dying bouquet to make way for a new one. A lot of people don’t consider the bacteria that can be in the vase before the bouquet goes in. A good rinse with warm water and soap will make sure the flowers have a clean start.