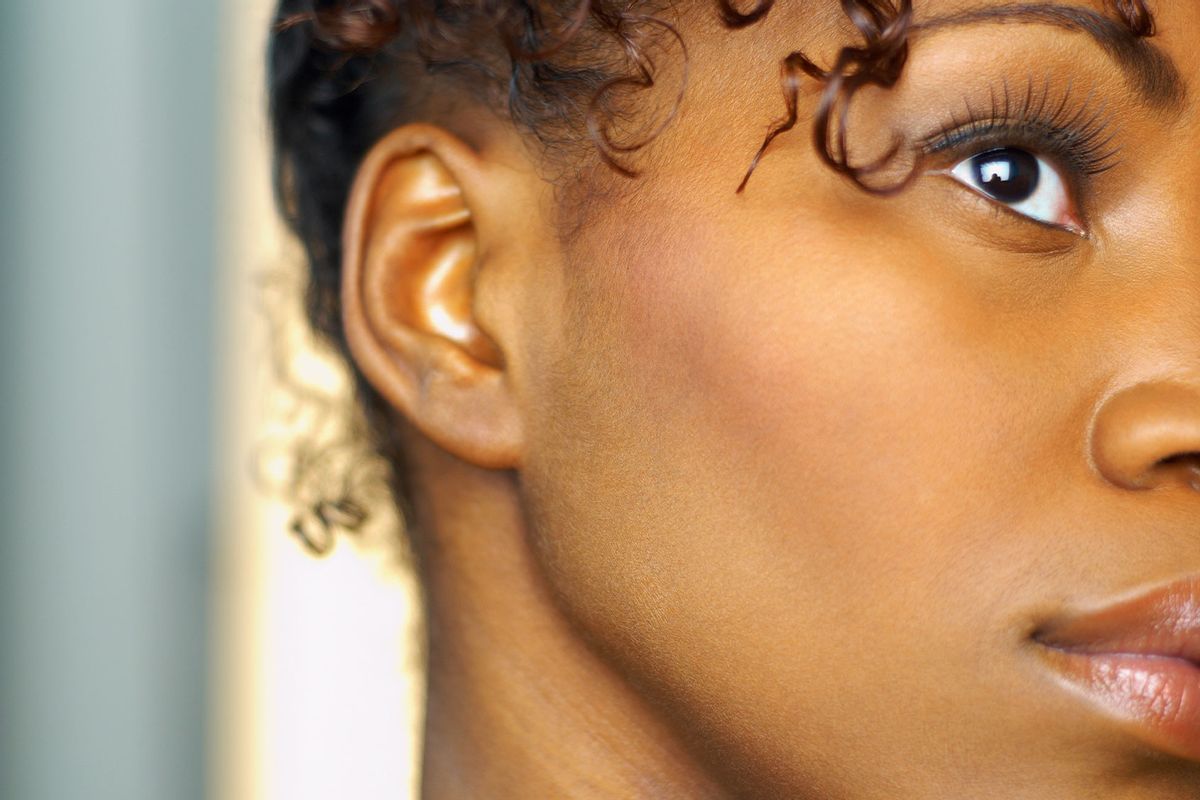 I have a hard time hearing men. This is not a metaphor. Many jokes could be made here. Some might say that a diminished capacity to hear a large swath of the global population might have its advantages. Others might argue the opposite. But since my hearing condition is not my choice, I haven’t yet gotten to the joke part, or the silver lining part, because I’m still trying to understand how I could have lived my whole life up to now without knowing I had this condition.

Early this year I learned that I have a rare type of hearing loss called a cookie-bite, so named because the audiogram appears to show a chunk missing from mid-frequency sounds. As the audiologist explained to me, most male voices are in this range. The loss is genetic — no event triggered the condition. It is simply the way my auditory system is built, likely from birth.

And it turns out that I’m far from alone — 1 in 8 women suffer from some kind of hearing loss. And although Black women are statistically less inclined to be diagnosed with a hearing impairment than white women, I still find myself in a group with Whoopi Goldberg and Halle Berry. Yet I don’t know if they’ve lived their entire lives unable to hear men clearly.

In many ways, my diagnosis was a relief. It validates my claims of “I’m not ignoring you!” when my partner tells me he’s repeated himself four times. It explains my seemingly irrational frustration with low-talkers, my belief that a disproportionate amount of men mumble, and that women talk very loudly, which I had believed to be a method of asserting ourselves in certain situations.

RELATED: I lost my hearing overnight. Here’s how I coped with my new silence

But here’s the most troubling aspect of my diagnosis: I got this far in life without realizing that one of my senses was impaired. In many ways, I’ve always believed that what I lack as an introvert I make up for with keen observation skills. So how did I let my hearing condition go unnoticed? Did the fact that I went to an all-girls high school help conceal this impairment during my formative years? Or was it that I was raised in a house where my relatively quiet father was outnumbered by women? Or did the life-long lessons to power through, be strong, don’t be sensitive shape how I trusted my hearing?

Did the life-long lessons to power through, be strong, don’t be sensitive shape how I trusted my hearing?

As a child, “don’t be so sensitive” was more of a concept than a lesson until one day, when I was in fourth grade, and a woman on the street slung racial slurs at me. A friend escorted me home while I cried.

“What’s wrong with her?” my father asked when he answered the door.

“An old lady called her the n-word, Mr. Ragbir,” Enzo said. “I told her to shut her trap, but I think Lise is sad.”

My father turned to me. “Why are you sad?”

“Didn’t you hear Enzo? A lady just called me a name.”

I didn’t know how to answer. My father waited. Enzo waited. Daddy asked again. “And?”

He interrupted me. “Haven’t you heard? Sticks and stones may break my bones but names can never hurt me?”

We’ve been conditioned to believe that “being sensitive” is useless — it distracts us, it digs into our potential.

My father is what many would consider a soft-spoken man. He sometimes stutters, which might be why he trained himself to keep his voice low, out of the fray. In my childhood home, no one competed with our fast and loud talking mother. It was her voice that bellowed the call to dinner or directed us to clean our room.

But my father didn’t stutter that day. I heard, “You can’t be so sensitive,” loud and clear.

I get it. These lessons aim to protect us, because we’ve been conditioned to believe that “being sensitive” is useless — it distracts us, it digs into our potential. But our senses allow us to receive information about the world and act accordingly. So, in an effort to be less sensitive and maximize our potential, have we also unwittingly diminished our connection to our senses? Effectively, actually, diminishing our potential?

As we try to make sense of an increasingly chaotic world, practices and systems of belief that have historically eluded “common sense” — like tarot and astrology — are making a comeback. And while lessons in empathy have become commonplace in stemming the flow of hate, space has also been created for empaths — people with an ability to detect (almost magically) the emotional or mental state of other people. But we might all be magical if we didn’t ignore our senses.

Did being called “sensitive” imply you’d be a less productive cog in a capitalist wheel?

What power structures turned us away from relying on our senses, or that which lies beyond our five senses — and made “being sensitive” a bad thing? Did being called “sensitive” imply you’d be a less productive cog in a capitalist wheel? How did sensitivity serve (or not) our ancestors? Those lessons were passed to us.

I’ve grown increasingly frustrated at how many more resources are directed at impaired vision, with a range of corrective lenses and laser procedures and support from health insurance. Is my hearing impairment less deserving of resources because, over the course of history, such a disability wouldn’t have prevented me from working in a field or on an assembly line?

To be clear, my hearing loss is minor, all things considered. And while I research ASL courses and shop for hearing aids that adequately control for cookie-bite hearing loss (it’s not straightforward), I’ve also wondered: Do I really need this accommodation if I’ve lived my entire life without it?

But this isn’t just about not hearing men. Over the course of my life, my hearing was sufficient for me to scrape what I needed from the surface. Knowing now what I’ve been missing has been a wake-up call on more than one front. As women’s rights face challenges like we’ve not seen in 50 years, we know we are not being listened to. We’re told our voices don’t matter. But I know now there is more than one way to be strong and powerful, and to be heard — loud and clear. And in the fight to manage our own bodies, I know I’m going to need to trust all of myself — my body, my senses and my sensitivities — to step into my full potential.