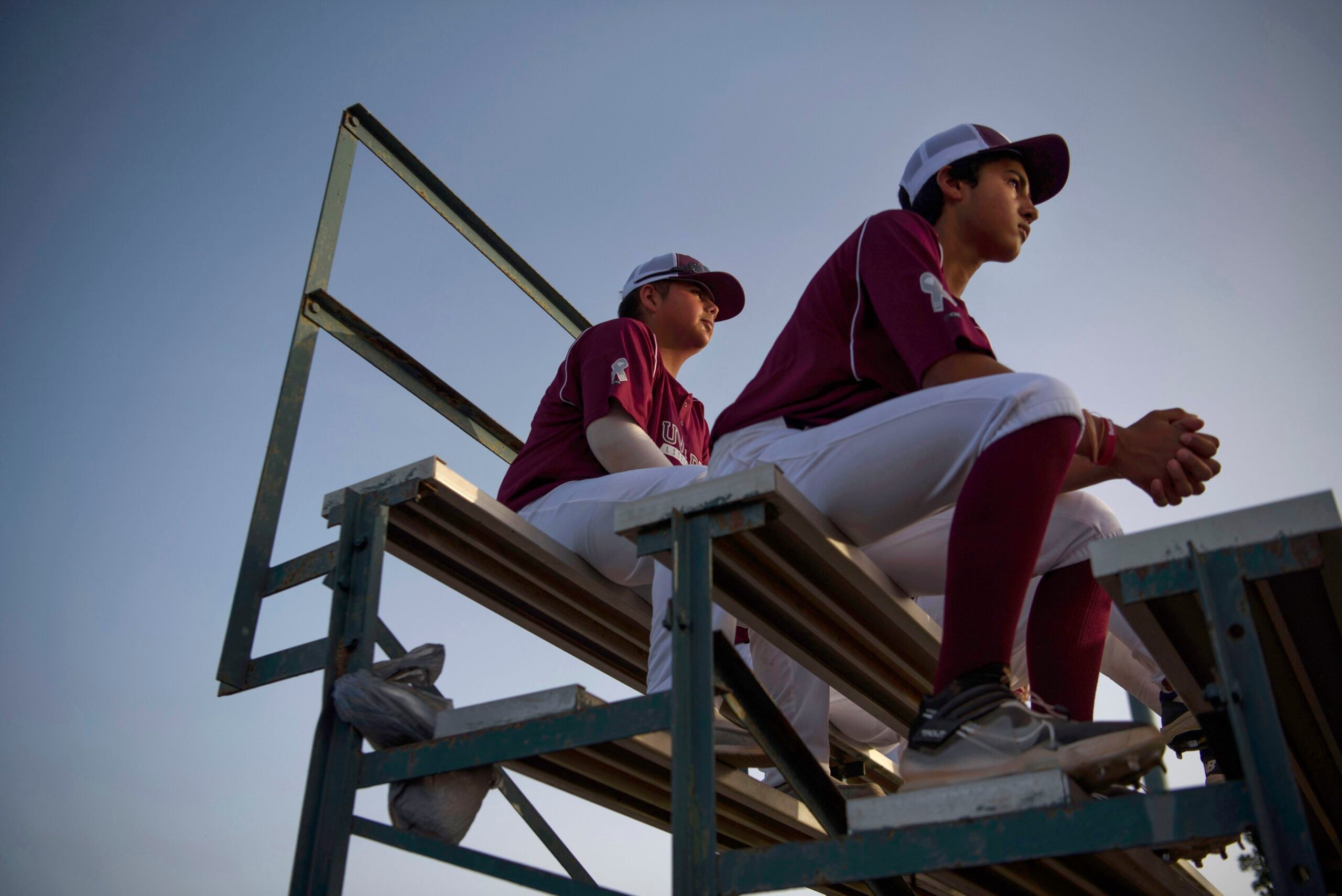 UVALDE, Texas — Young people in their crisp Little League uniforms ran up and down the field in giddy anticipation. The smell of nacho cheese and sizzling chicken fajitas spread through the bleachers on the hot summer night breeze.

It has been a month of mourning in Uvalde, Texas: 21 funerals in 17 days in the wake of a mass shooting at Robb Elementary School. This past weekend’s Little League All-Star Championship, an event Uvalde had proudly planned to host, had seemed like the next casualty; of the 19 children killed, six were on the team. No one felt like competing, much less cheering.

But then they thought again. Maybe baseball was exactly what they needed.

“You don’t want to use the word ‘fun,’ but you want to see children happy again,” said Cody Gardner, whose 9-year-old son, Jage, was eager to play ball. “Baseball has always brought us together. There is still an overwhelming sense of sadness and a little bit of normalcy.”

On Thursday, they paused to honor the dead at an opening ceremony at the city of Uvalde Sports Complex, handing out a jersey and a baseball to each of the six families who had lost a player. Uvalde Little League’s president, J.J. Suarez, moved down a line of two dozen relatives, hugging each of them in turn.

First, there were 21 seconds of silence. Then, the deep voice of the announcer, Wade Carpenter, echoed across the field.

“We are Uvalde strong. Let’s play ball!” he said.

And with that, players fanned out across four baseball diamonds, pitched balls, ran the bases and, for a few hours, set aside their grief in the arms of America’s favorite pastime.

Leticia Rodriguez, 61, cracked a bittersweet smile, watching children and their parents form a long line to savor the fajitas she was cooking next to the concession stand.

“In a small town like this, there is not much to do. All we got is baseball,” said Rodriguez, whose 18 grandchildren have all played in the Uvalde Little League. “We had to come back for the children. We had to.”

The summer tournament almost did not happen. Although Uvalde had been chosen this spring to host the regional tournament, the May 24 shooting prompted the Uvalde Little League, which sponsors more than 620 children ages 4 to 15, to consider ceding the hosting privileges to another town.

But Matthew Hughes, a league board member whose daughter plays, said almost everyone they talked to, including parents of the fallen team players, agreed to go forward.

“I reached out to a couple of counselors in town and asked them, ‘What do you think?’ They said that part of the healing process is getting people back to the level of continuity, a level of regularity as quickly as possible,” Hughes said. “In my mind, we are putting on this tournament for all of them.”

Last week, Suarez, who has been part of the league for two decades, helped place the portraits of the six fallen players on the wall of a dugout, each posing in a Little League uniform with a bat, forever 10 years old: Xavier Lopez, Tess Mata, Eliahna Torres, Alexandria Rubio, Jose Flores Jr. and Makenna Elrod. When Suarez got to the last one, he found himself with tears streaming down his face.

Some parents wrestled with whether moving forward was the right decision. “It feels like you are being selfish, you know?” said Erica Bueno, whose 9-year-old son, Joaquin, made it to the All-Star team. “Getting back to normal when there is so much pain in this town.” She paused, then added, “You feel bad for trying to be happy.”

Two days before the tournament, Bueno watched with a mix of joy and worry as Joaquin tried to catch a ball during a practice game. The boy, who played on the same team as Xavier, seemed to be in good spirits, she said, but then again it was hard to gauge what boys his age were thinking.

When they had attended Xavier’s funeral service a few days earlier, she said, Joaquin had a hard time with his emotions, especially after seeing his friend lying motionless in an open coffin, surrounded by flowers and Little League mementos.

“He asked, ‘Mom, why would someone do something like this?’” she said. “I tried to explain that there is evil in this world and some people make evil choices. It is hard for them to understand what death means.”

Her older daughter, Isabella Bueno, 12, who also plays Little League, had an even harder time accepting what had happened. She is close friends with Makenna’s older sister, and when they got together it was not unusual for the younger girl to tag along.

For days after the killings, Isabella “shut down” and would not leave her room, her mother said. Seeing her teammates again has improved Isabella’s mood or at least distracted her from the pain, Bueno added.

Kyla Sanchez, 13, another Little League player, said that returning to the field was painful but necessary. Wearing a maroon Uvalde Little League T-shirt, she took a minute to study the portraits of her late friends. Kyla was also close to Makenna, who posed in a batting stance for her portrait. Kyla said she could not erase from her mind Makenna’s sweet smile.

“She would always run up to me and give me hugs,” Kyla said softly. “I would just cheer her on.”

Kyla’s mother, Cheryl Sanchez, who is also a league board member, accompanied her to ensure that she was up to it. “We believe that just letting kids be with each other is the best healing process,” Sanchez said.

Suarez lost a friend of his own: Joe Garcia, whom he had known since high school, had a fatal heart attack two days after his wife, Irma Garcia, and another teacher, Eva Mireles, were killed in the massacre. Joe had met Irma in high school, and they had been inseparable ever since, Suarez recalled. The high school friendships have passed to the next generation: Suarez’s two children are friends with the Garcias’ four children, now orphaned.

“He died of a broken heart,” Suarez said of his friend. “He is a victim of this tragedy, too.”

Then the Uvalde Junior League, for ages 12 to 14, took the field against the team from Jourdanton, Texas. In an intense contest that stretched past midnight, Uvalde won 10-5.

On Sunday, in one of the most anticipated games of the tournament, Suarez’s softball team for ages 10 to 12 took on their rivals from Devine, Texas.

The mood at first was solemn, with another period of silence for the dead. But then the Uvalde players broke out into a familiar chant: “Everywhere we go, people want to know, who we are,” they shouted. “We are Uvalde, mighty, mighty Uvalde!”

The team proved unstoppable, scoring 23 runs to Devine’s 3 by the top of the third inning. By game’s end, they celebrated a 25-6 victory. “Outstanding effort from all of you,” Suarez told the girls. “All of you gave 100%.”

Throughout the week’s games and practice sessions, much of the time was spent reminiscing. Willa Suarez, 13, Suarez’s daughter, remembered her friend Eliahna, who was named an honorary All-Star during Sunday’s game. Willa said Eliahna always had a smile on her face: “She was always a team player. After every game, win or lose, she would say, ‘Good game.’”

One of Eliahna’s last runs kept playing in her mind, Willa said, like a video in slow motion. It was more than a month ago, and Eliahna was playing on the opposing team.

Willa recalled seeing Eliahna standing there, waiting for the ball, bat in hands. Then, contact. “She had an amazing hit,” Willa said.

Eliahna dashed toward first base, then second. The next batter got a hit, and Eliahna “saw an opportunity,” Willa recalled, and sprinted toward home. One of Willa’s teammates caught the ball and darted toward Eliahna, but she slid into home plate. “It was a close call,” Willa remembered. “But she was called safe.”

Eliahna had looked up, grinning, Willa said. The crowd erupted in cheers and claps. Willa got caught up in the moment and realized she had been clapping for Eliahna, too.