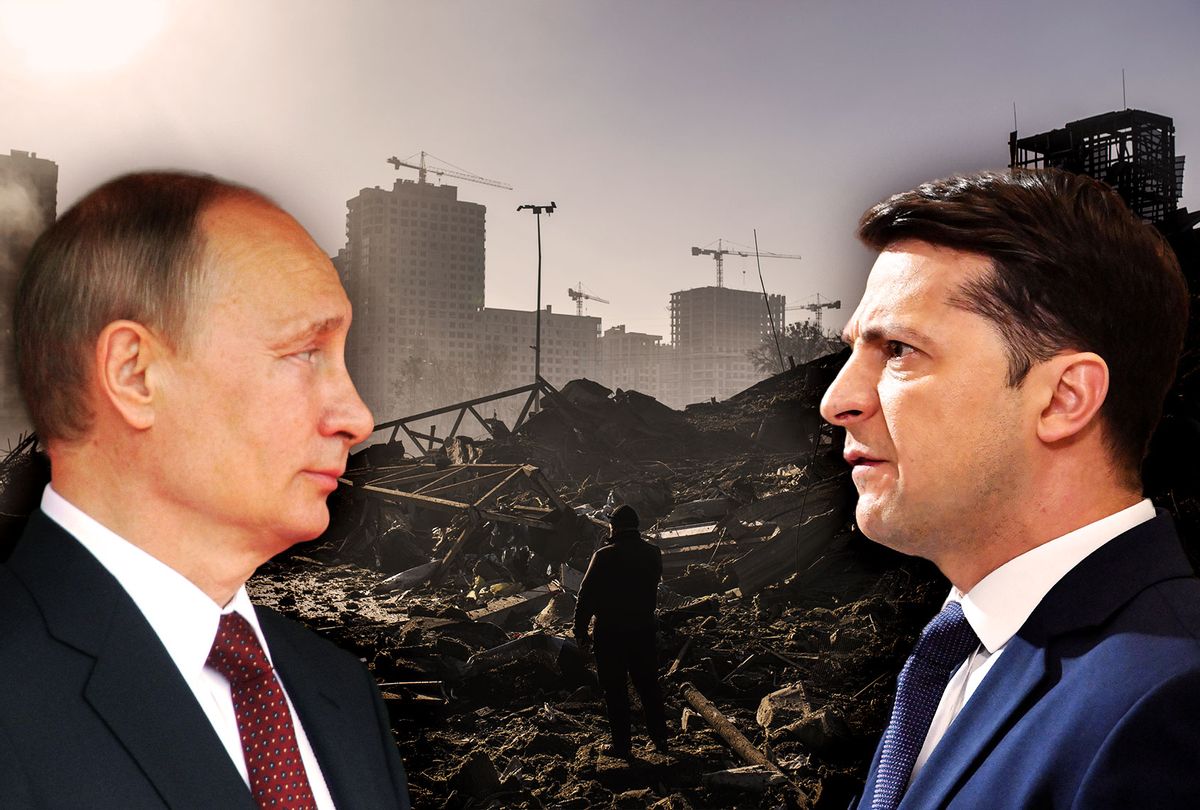 As the war in Ukraine has dragged on for nine months and a cold winter is setting in, people all over the world are calling for a Christmas truce, harkening back to the inspirational Christmas Truce of 1914. In the midst of World War I, warring soldiers put down their guns and celebrated the holiday together in the no-man’s land between their trenches.This spontaneous reconciliation and fraternization has been, over the years, a symbol of hope and courage.

Here are eight reasons why this holiday season too offers the potential for peace and a chance to move the conflict in Ukraine from the battlefield to the negotiating table.

1. The first, and most urgent reason, is the incredible daily death and suffering in Ukraine, and the chance to save millions more Ukrainians from being forced to leave their homes, their belongings and the conscripted menfolk they may never see again.

With Russia’s bombing of key infrastructure, millions of people in Ukraine currently have no heat, electricity or water as temperatures drop below freezing. The CEO of Ukraine’s largest electric corporation has urged millions more Ukrainians to leave the country, ostensibly for just a few months, to reduce demand on the war-damaged power network.

The war has wiped out at least 35% of the country’s economy, according to Ukrainian Prime Minister Denys Shmyhal. The only way to halt the meltdown of the economy and the suffering of the Ukrainian people is to end the war.

2. Neither side can achieve a decisive military victory, and with its recent military gains, Ukraine is in a good negotiating position.

It has become clear that U.S. and NATO military leaders do not believe, and possibly have never believed, that their publicly stated goal of helping Ukraine to recover Crimea and all of Donbas by force is militarily achievable.

In fact, Ukraine’s military chief of staff warned President Volodymyr Zelenskyy in April 2021 that such a goal would not be achievable without “unacceptable” levels of civilian and military casualties, leading him to call off plans for an escalation of the civil war at that time.

Joe Biden’s top military adviser, Gen. Mark Milley, chairman of the Joint Chiefs of Staff, told the Economic Club of New York on Nov. 9, “There has to be a mutual recognition that military victory is probably, in the true sense of the word, not achievable through military means.”

French and German military reviews of Ukraine’s position are reportedly more pessimistic than U.S. ones, assessing that the current appearance of military parity between the two sides will be short-lived. This adds weight to Milley’s assessment, and suggests this could well be the best chance Ukraine will get to negotiate from a position of relative strength.

3. U.S. government officials, especially in the Republican Party, are starting to balk at the prospect of continuing this enormous level of military and economic support. Having taken control of the House, Republicans are promising more scrutiny of Ukraine aid. Rep. Kevin McCarthy, who is likely to become speaker of the House next month, warned that Republicans would not write a “blank check” for Ukraine. This reflects the growing opposition at the base of the Republican Party, with a Wall Street Journal November poll showing that 48% of Republicans say the U.S. is doing too much to help Ukraine, up from 6% in March.

4. The war is causing upheavals in Europe. Sanctions on Russian energy have sent inflation in Europe skyrocketing and caused a devastating squeeze on energy supplies that is crippling the manufacturing sector. Europeans are increasingly feeling what German media call Kriegsmudigkeit. That translates as “war weariness,” but that is not an entirely accurate characterization of the growing popular sentiment in Europe. “War wisdom” may describe it better.

People have had many months to consider the arguments for a long, escalating war with no clear endgame — a war that is sinking their economies into recession — and more of them than ever now tell pollsters they would support renewed efforts to find a diplomatic solution. That includes 55% in Germany, 49% in Italy, 70% in Romania and 92% in Hungary.

5. Most of the world is calling for negotiations. We heard this at the 2022 UN General Assembly, where one after another, 66 world leaders, representing a majority of the world’s population, eloquently spoke out for peace talks. Philip Pierre, prime minister of Saint Lucia, was one of them, pleading with Russia, Ukraine and the Western powers “to immediately end the conflict in Ukraine, by undertaking immediate negotiations to permanently settle all disputes in accordance with the principles of the United Nations.”

French and German military reviews of Ukraine’s position are more pessimistic than U.S. ones. This could be the best chance Ukraine will get to negotiate from a position of relative strength.

As the emir of Qatar, Sheikh Tamim bin Hamad Al Thani, told the General Assembly, “We are fully aware of the complexities of the conflict between Russia and Ukraine, and the international and global dimension to this crisis. However, we still call for an immediate ceasefire and a peaceful settlement, because this is ultimately what will happen regardless of how long this conflict will go on for. Perpetuating the crisis will not change this result. It will only increase the number of casualties, and it will increase the disastrous repercussions on Europe, Russia and the global economy.”

6. The war in Ukraine, like all wars, is catastrophic for the environment. Attacks and explosions are reducing all kinds of infrastructure — railways, electrical grids, apartment buildings, oil depots — to charred rubble, filling the air with pollutants and blanketing cities with toxic waste that contaminates rivers and groundwater.

The sabotage of Russia’s underwater Nord Stream pipelines supplying Russian gas to Germany led to what may have been the largest release of methane gas emissions ever recorded, amounting to the annual emissions of a million cars. The shelling of Ukraine’s nuclear power plants, including Zaporizhzhia, the largest in Europe, has raised legitimate fears of deadly radiation spreading throughout Ukraine and beyond.

Meanwhile, U.S. and Western sanctions on Russian energy have triggered a bonanza for the fossil fuel industry, giving them a new justification to increase their dirty energy exploration and production and keep the world firmly on course for climate catastrophe.

7. The war has a devastating economic impact on countries across the world. The leaders of the world’s largest economies, the Group of 20, said in a declaration at the end of their November summit in Bali that the Ukraine war “is causing immense human suffering and exacerbating existing fragilities in the global economy — constraining growth, increasing inflation, disrupting supply chains, heightening energy and food insecurity and elevating financial stability risks.”

Our long-standing failure to invest the relatively small proportion of our resources required to eradicate poverty and hunger on our otherwise rich and abundant planet already condemns millions of our brothers and sisters to squalor, misery and early deaths.

Now this is compounded by the climate crisis, as entire communities are washed away by flood waters, burned out by wildfires or starved by multi-year droughts and famines. International cooperation has never been more urgently needed to confront problems that no country can solve on its own. Yet wealthy nations still prefer to put their money into weapons and war instead of adequately addressing the climate crisis, poverty or hunger.

8. The last reason, which dramatically reinforces all the other reasons, is the danger of nuclear war. Even if our leaders had rational reasons to favor an open-ended, ever-escalating war over a negotiated peace in Ukraine — and there are certainly powerful interests in the weapons and fossil fuel industries that would profit from that — the existential danger this could lead to absolutely must tip the balance in favor of peace.

We recently saw how close we are to a much wider war when a single stray Ukrainian anti-aircraft missile landed in Poland and killed two people. President Zelenskyy refused to believe it was not a Russian missile. If Poland had taken the same position, it could have invoked NATO’s mutual defense agreement and triggered a full-scale war between NATO and Russia.

If another predictable incident like that leads NATO to attack Russia, it can only be a matter of time before Russia sees the use of nuclear weapons as its only option in the face of overwhelming military force.

For these reasons and more, we join the faith-based leaders around the world who are calling for a Christmas Truce, declaring that the holiday season presents “a much-needed opportunity to recognize our compassion for one another. Together, we are convinced that the cycle of destruction, suffering and death can be overcome.”

about the Ukraine war and its consequences