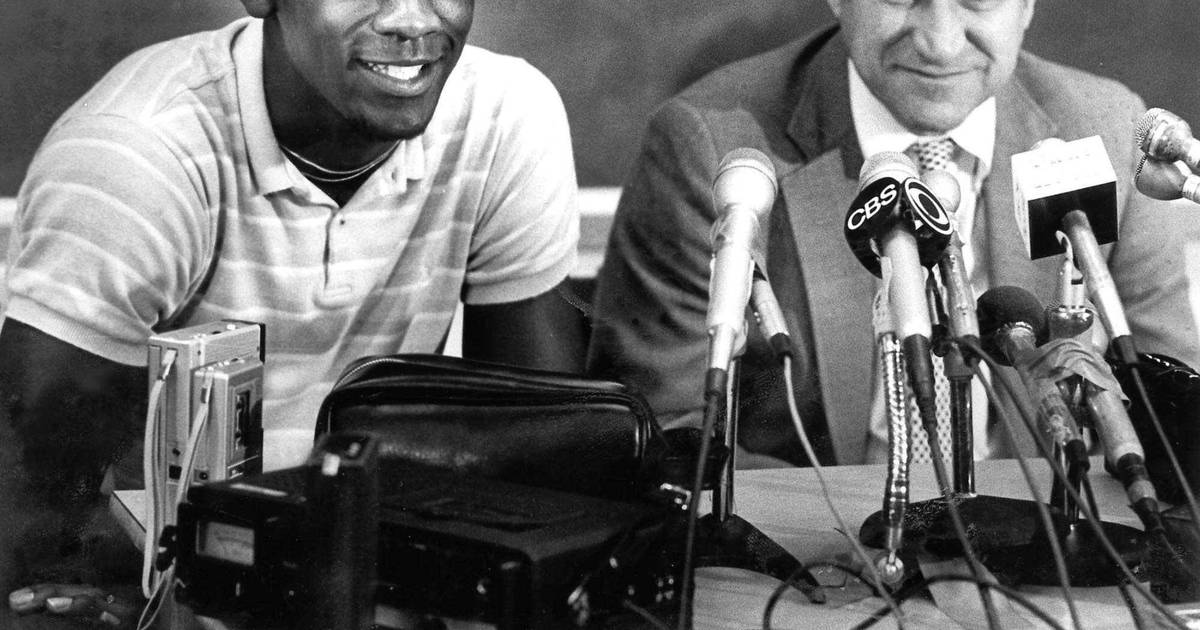 Not by outsiders but by ourselves.

In the year of the nation’s bicentennial, the last local team to win a championship was the 1963 Bears. The Cubs hadn’t won since 1908, the White Sox since 1917.

Every time a Chicago team tried to break the mold, a collapse of monumental proportions would unfold, and fans here grew to expect nothing less.

But the next 25 years would bring massive changes to the local sports scene, including the arrival of Michael Jordan, who would go on to become the greatest basketball player of all time and bring six titles to Chicago with the Bulls.

The Bears won their only Super Bowl in the 1985 season behind a fiery coach and a collection of fun-loving characters who ruled the city like no team before or since. New baseball ownership on the North and South sides attempted to end the droughts of the Cubs and White Sox, which ultimately bled into the 21st century. It was also the end of the line for two beloved stadiums, Comiskey Park and the Chicago Stadium, and for the time-honored tradition of day-only baseball at Wrigley Field.

And for those who loved reading about their favorite teams and athletes through thick and thin, 1976-2000 was a golden era for Chicago sports writing — and the Tribune was graced by some of the finest writers in history.

From “In the Wake of the News” columnists Bob Verdi, Bernie Lincicome and Steve Daley to Hall of Fame baseball writer Jerome Holtzman to specialists including Don Pierson (football), Sam Smith (basketball), John Husar (outdoors) and Fred Mitchell (multiple sports), the idea of a slow news day on the Chicago sports front was virtually unthinkable.

It’s hard for some to believe now, but DePaul men’s basketball was bigger than the Bulls before Jordan’s arrival from North Carolina in 1984. Legendary coach Ray Meyer’s Blue Demons started out as a Cinderella in 1979 and wound up dancing all the way to the Final Four while playing their home games in tiny Alumni Hall on Belden Avenue.

They never made it back, despite highly ranked teams, and moving to the Rosemont Horizon in 1980 removed the narrative of the lovable little school under the “L” tracks.

Chicagoans didn’t expect much from their teams in the 1970s and early ‘80s and thus were seldom disappointed. Fans could overlook the flaws on a team that was entertaining, such as the “South Side Hit Men” of 1977.

In July of that season, Verdi, then the White Sox beat writer, wrote that the players “gamble so wantonly on the basepaths you would think they failed to visit the john before leaving the clubhouse.” The Hit Men faded on cue, like a pair of well-worn blue jeans. But 45 years later they remain a treasured part of Sox lore.

The Bears were an afterthought for most of the 1979 season after starting out 3-5. But running back Walter Payton, linebacker Doug Buffone and a resilient bunch won six of seven leading into the season finale at Soldier Field. They needed a win over the St. Louis Cardinals and a Washington Redskins loss — and to make up a 33-point differential with the Redskins — for a wild-card spot.

The players awoke on Dec. 17 to the news that Bears President George “Mugs” Halas Jr. — the 54-year-old heir apparent to team founder George “Papa Bear” Halas — had died. But the Bears went on to trounce the Cardinals 42-6 before the Redskins lost by one point to the Dallas Cowboys, giving Payton & Co. a playoff berth.

“From dawn to dusk the Bears were involved in perhaps the most unbelievable day in their 60-year history,” Pierson wrote.

The Bears lost to the Philadelphia Eagles in the 1979 playoffs, but Halas hired coach Mike Ditka in January 1982, and the ‘85 Bears not only won the Super Bowl and brought Chicago its first championship since 1963, but also changed the way athletes marketed themselves with their “Super Bowl Shuffle” video.

With an escort from Otis Wilson (55), Bears’ Wilber Marshall (58) steams into the endzone in the fourth quarter after scooping up a fumble 52 yards upfield during the NFC Championship game with the Los Angeles Rams at Soldier Field on Jan. 12, 1986. (Bob Langer / Chicago Tribune)

Halas was not alive to see it, and daughter Virginia McCaskey inherited the team. In a front-page article, Tribune sports writer Phil Hersh wrote: “The Bears, once hoisted aloft, can simply put one foot on the Picasso, another on the Sears Tower, and step right up to the Chicago cloud, where team founder George Halas will be waiting.”

For decades the names Halas, Wrigley and Wirtz were synonymous with the word “frugal” in the minds of many fans. Others preferred the generic term “cheapskates.” Verdi nicknamed Blackhawks owner Bill Wirtz “Dollar Bill” in a Tribune column for his inability to part with money to pay his players.

Reputations are difficult to erase. Just ask the Cubs.

During a baseball strike in the summer of 1981, Tribune Co. — at that time, the owner of the newspaper, WGN-TV, WGN-AM 720 and other entities — pulled off a shocking deal with William Wrigley to purchase the Cubs for $20.5 million, or $1.5 million less than current Cubs outfielder Jason Heyward’s 2022 salary.

The Wrigley family had owned the team for three generations and stamped its name on the iconic ballpark. But on June 17, 1981, the day after the sale was announced, the Tribune reported Cubs fans were ecstatic over the possibility of the team finally spending money, installing lights at Wrigley Field and dismissing general manager Herman Franks.

“It was clear the general attitude would have been positive even if Bozo the Clown had taken over,” read one report in the Tribune sports section.

In spite of new management, nothing changed immediately. Cubs gotta Cub. Early in the 1983 season, manager Lee Elia unleashed a profanity-laden tirade against Cubs fans, calling them the “dumb 15 (bleeping) percent that come out to day baseball (while) the other 85 percent are earning a living.” Radio reporter Les Grobstein saved the tape for posterity, and every year Cubs fans relive the memory of the rant heard around the world.

The White Sox, however, would be the bigger story in ‘83. Manager Tony La Russa’s club shook off a lethargic first half to run away with the American League West title and dominate the headlines. “The Miracle on 35th Street,” Holtzman wrote on Aug. 29, 1983, after Greg “The Bull” Luzinski cranked his third rooftop home run of the season at Comiskey Park.

The miracle ended with a loss to the Baltimore Orioles in the American League Championship Series, and La Russa was fired in 1986 — only to return 34 years later. When the Sox flopped in ‘84, the Cubs stole the city back.

“Bullies, that’s what we’ve become,” Royko wrote. “Big, bad, mean bullies. And, oh boy, does it feel great. Why didn’t we think of this years ago?”

The bullies blew a 2-0 lead in the best-of-five series, an epic collapse that somehow trumped the misery of 1969.

But Wrigleyville — or Lakeview, as the neighborhood was more commonly known in the early ‘80s — would never be the same. Lights arrived at Wrigley Field on Aug. 8, 1988, and the formerly run-down neighborhood turned into a yuppie paradise. Rooftops became big business and real estate values climbed.

The Cubs soon resorted to their old ways, but the Harry Caray effect and the fans’ love affair with Wrigley made the team a gold mine for Tribune Co., which mirrored the Wrigley ownership in its reluctance to spend. After a surprising division title in 1989 under Don Zimmer, the Cubs didn’t return to the postseason until Sammy Sosa and Kerry Wood led them to a wild-card spot in 1998.

During the ‘98 playoff race, Cubs radio analyst Ron Santo made one of the most famous calls in franchise history, shouting “Oh, noooooo!” after a dropped fly ball by outfielder Brant Brown led to a ninth-inning loss in Milwaukee.

“It was the kind of despair you’d associate with someone losing a member of their family,” Santo’s broadcast partner, Pat Hughes, later told the Tribune. “His call will live on in Cubs lore — in infamy, you could say, because it was such a tough loss.”

The Blackhawks went through an array of ineffective and overmatched coaches from 1976-2000, including Bob Pulford’s three stints from 1977-87. Pulford also served as general manager, where he was equally clueless.

The only time the Hawks were relevant was during the Mike Keenan era, when the feisty coach led them to the Stanley Cup Finals in 1992. But the Hawks were promptly swept in four games by the Pittsburgh Penguins, and Keenan lost a power struggle with Wirtz six months later and was let go.

“Keenan wanted to be king,” Verdi wrote. “The power freak craved too much of a fix, and the real boss declared, game over.”

It wasn’t until 1991 that Chicago sports fans got a real taste of excellence. Jordan and Scottie Pippen led the Bulls to their first title, beating Magic Johnson and the Los Angeles Lakers in five games in the NBA Finals. After a third straight championship in 1993, Jordan retired to play minor-league baseball for the White Sox, only to return in ‘95 and team up with Pippen and Dennis Rodman for another three-peat from 1996-98.

Jordan’s winning shot in Game 6 of the 1998 NBA Finals in Utah clinched the sixth Bulls title, capping a reign that seemed to make up for all the disappointing endings Chicago teams suffered the previous three decades.

“And there was Michael Jordan, after hitting what could have been his final and biggest basket as a Bull, hugging coach Phil Jackson,” Tribune beat writer Terry Armour wrote. “Both had tears in their eyes, realizing that this might be the end of the road.”

Jordan’s shot would provide Chicago with a memory to last a lifetime, like the championships this century for the White Sox (2005), Cubs (2016) and Blackhawks (2010, ‘13 and ‘15). But Santo’s call, Elia’s rant, the South Side Hit Men and the “unbelievable day” of the ‘79 Bears won’t be forgotten soon either.

If there’s one thing we’ve come to accept in Chicago, it’s that the journey still matters.