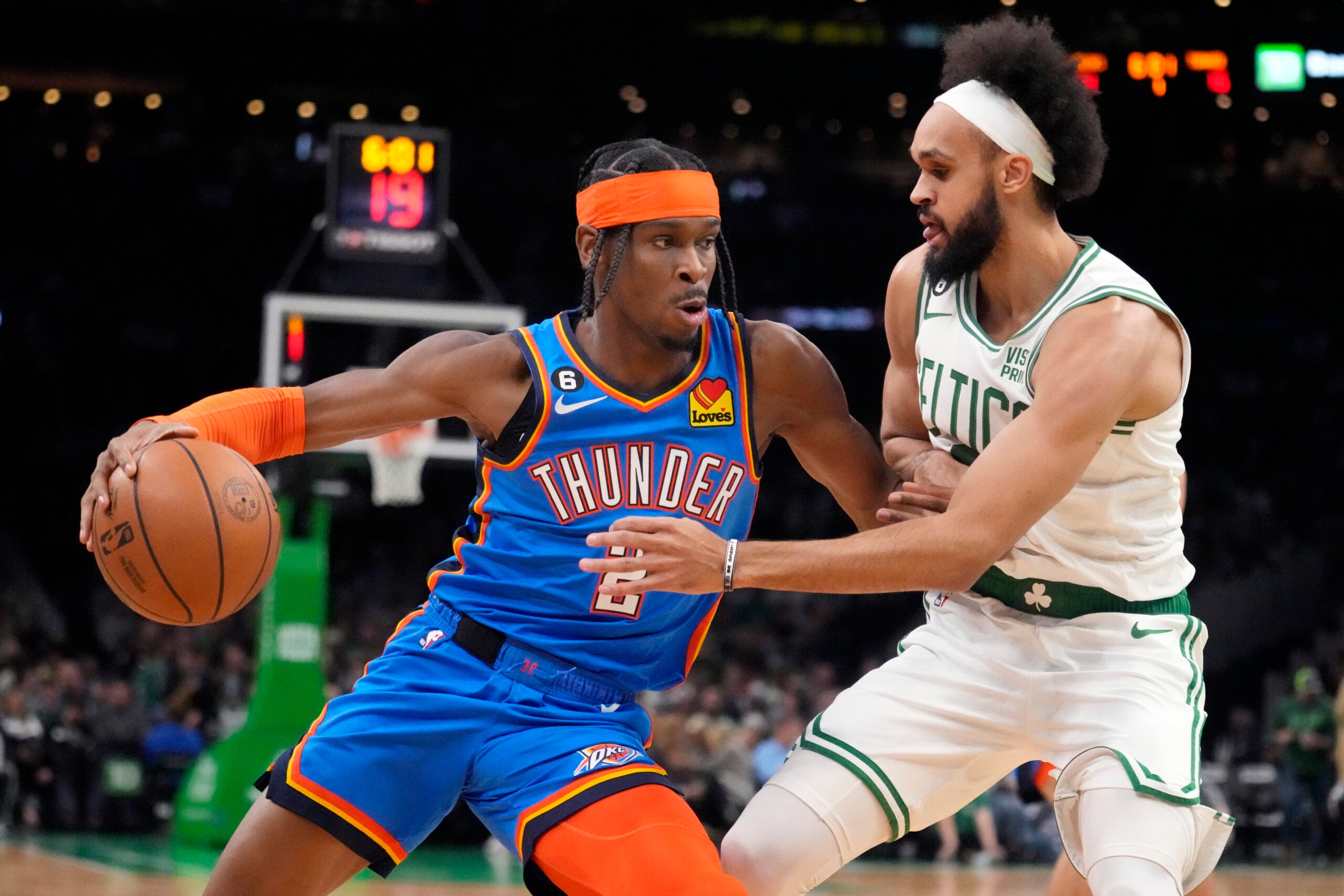 The Celtics pulled out a hard-fought 126-122 victory on Monday, overcoming a slow start to beat a lively young Thunder team.

The Thunder shocked the Celtics early with high-octane offense, which propelled them to a 35-point first quarter and a three-point lead. The Celtics couldn’t find the range from behind the arc, and Oklahoma City’s lead ballooned to a threatening 69-62 at halftime.

The Thunder have been the best third-quarter team in the league this season, and sure enough, they stretched their lead as high as 15 in the period. But the Celtics finally woke up as the period wound down on both ends and started turning the Thunder over repeatedly. Meanwhile, a five-point flurry by Payton Pritchard trimmed the advantage down to a much more manageable 96-89.

In front of an electrified TD Garden crowd, the Celtics managed to inch closer, tie the game, and then finally take the lead. Two huge 3-pointers — one each by Marcus Smart and Derrick White — as well as a layup by Smart sealed the deal in the closing minutes.

Star of the Game

Smart has been flirting with this designation over the last few weeks as he racks up high-assist, low-turnover outings, but Monday’s was a masterpiece down the stretch as he scored 10 points in the fourth quarter. The Celtics would have lost Monday’s game without him.

The Celtics need to play defense to beat teams when they can’t make 3-pointers. They are also an experienced, veteran team that can grind out victories when necessary. On Monday, a lot of grinding was necessary to cement the Celtics’ seventh-straight win.

1. Jayson Tatum and Jaylen Brown led the Celtics with 27 and 26 points respectively, but the Celtics got a huge boost from their role players. We mentioned Smart above, who buried several big shots and sparked the comeback with his defense. Derrick White did the same with 16 crucial points, five assists and four steals. Pritchard’s stretch at the end of the third put the Celtics in position to finish off their comeback.

Smart was asked after the game what changed in the second half.

“Payton Pritchard and Derrick White,” he said. “They came in — first unit was a little sluggish, we tried, we was getting everything, guys just couldn’t find it — and those two came in and they gave us the jolt we needed. So the energy definitely shifted with those two guys coming in the game.”

On a team that is often hyper-superstar-driven, the Celtics showed they have the talent to win when neither Tatum nor Brown scored 30. Tatum (1-for-9 from three) and Brown (0-for-5), meanwhile, showed they pitch enough points into the pot to buy a win even when they can’t find the range from behind the arc.

2. Pritchard in particular has found ways to remind the Celtics that he is on the roster with Malcolm Brogdon out. The third-year guard is often squeezed for minutes behind Smart, Brogdon and White, but he consistently contributes when he gets extended run outside of garbage time.

“Payton, I love that guy,” Brown said. “How he comes in and he’s just ready to go and that’s tough to do in this league, not knowing if your name is going to be called. And then just come in and just give us automatic energy just like he did? That was amazing.”

“Ever since I’ve been young, everybody has been telling me to get back,” Pritchard said. “But I’ve always known how to read it off the rim, so I just linger and I never worry about getting back because I sprint back and pick up the ball. I’m not worried about somebody beating me off that but I just wait to see it come off the rim and be the first one on it.”

“I thought the first half we just weren’t sharp,” Joe Mazzulla said. “We were looking a little tired, and I thought our bench unit did a great job of bringing the energy and kind of picking us up. Once we were able to be picked up we executed on both ends of the floor. So that’s a team effort and because of our depth we’re able to rely on that.”

4. Jayson Tatum picked up a technical early in the third quarter for clapping.

Players are not allowed to clap at officials, but replays made it abundantly clear that Tatum was not actually clapping at the referee — he wasn’t even looking in the officials’ direction when he did it.

“Anybody in the arena, anybody watching the game, could have seen I was frustrated with myself,” Tatum told reporters after the game.

The league could take a look at that call and rescind it, which would matter down the stretch if Tatum — who is known to pick up technicals here and there — finds himself up against the league limit late in the season. Kevin Durant certainly thinks they should. So does Ja Morant.

5. Shai Gilgeous-Alexander is a real-deal superstar — the type of player a franchise hopes to acquire through the draft. On Monday, he burned the Celtics for 37 points on 13-for-26 shooting, a slithering, lanky athlete who can score in a multitude of ways and finish with finesse.

Gilgeous-Alexander might single-handedly drag the Thunder out of contention for Victor Wembanyama, which would be pretty ironic given how blatant the Thunder have been as a tanking team — a No. 11 pick dragging a roster otherwise constructed to lose as many games as possible out of a chance to draft a player who best represents why teams tank.

6. The Celtics might have won a little more comfortably if they hadn’t shot 10-for-37 from 3-point range (27 percent). In the first three quarters, the Celtics were just 6-for-27 from deep (22.2 percent), finishing 4-for-8 in the final quarter.

When the Celtics can’t make 3-pointers, they need to defend to win. Fortunately, they recorded 15 total steals to the Thunder’s four, 10 of which came in the second half. They defended just long enough to win on a night when their defense needed to carry them.

The Celtics travel to Atlanta to search for their eighth-consecutive win against the Hawks on Wednesday at 7:30 p.m.