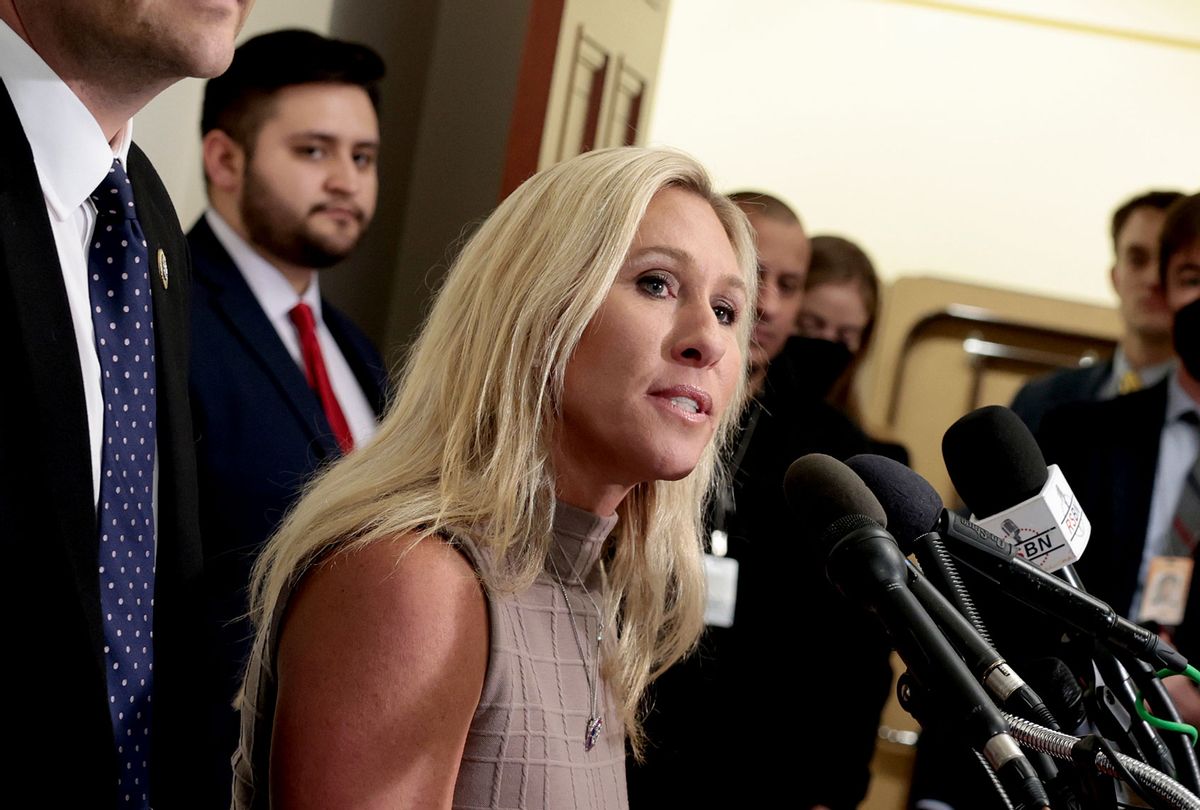 WASHINGTON, D.C. — Rep. Marjorie Taylor Greene (R-GA) on Friday said she would soon introduce articles of impeachment against U.S. Attorney General Merrick Garland in the wake of the FBI’s raid of Mar-a-Lago.

A copy of the resolution, obtained by Daily Caller reporter Henry Rodgers, states that Garland should be impeached for personally approving search of Donald Trump’s Florida home. The resolution describes the search as “a blatant attempt to persecute a political opponent.”

“They’ve been trying to impeach President Trump and they’ve been attacking President Trump for six years now,” the congresswoman told reporters. “The left has led violence against the right for a long time.. Anyone that wears a MAGA hat is demonized. You talk about a movement to politically paint a group of people into something bad — the left has done that to the right for six years now, specifically Donald J. Trump.”

“Nobody is calling for violence against the FBI or Department of Justice,” Greene continued. “We are just sick and tired of the two-tiered justice system in America where people are jailed just a couple of blocks from here in the D.C. jail and where, you know, antifa and BLM rioters, they are let go. But yet people who just walked into the Capitol here on January 6 are demonized and called terrorists every single day. Enough of the two-tiered justice system in America, and that’s why Merrick Garland has to be impeached, because he’s the leader of it.”

Garland has faced furious rebukes from Republicans over the search of Trump’s resort, which is related to the potential mishandling of classified documents.

“I personally approved the decision to seek a search warrant,” Garland told reporters on Thursday. “The department does not take such a decision lightly.”

“The search warrant was authorized by a federal court upon the required finding of probable cause,” he said.

While noting that “ethical obligations” prevented him detailing the basis of the raid, Garland said he had asked a Florida judge to unseal the warrant because Trump had publicly confirmed the search and because of the “substantial public interest in this matter.”

The Justice Department typically does not confirm or deny whether it is investigating someone. Garland, a former prosecutor and judge who has a reputation as a stickler for protocol, took pains to emphasize the law was being applied fairly.

“Faithful adherence to the rule of law is the bedrock principle of the Justice Department and of our democracy,” he said. “Holding the rule of law means applying the law evenly without fear or favor.”

The warrant and related materials, released Friday, indicated that Trump is facing a federal investigation over the removal or destruction of records, obstruction of an investigation, and violating the Espionage Act. The documents also showed that federal agents took away with them a significant number of documents labelled “top secret.”

Greene said earlier this week that she would work with her Republican colleagues to “totally gut” the FBI and Department of Justice.

“Many Republican members are now unified and we’ll be taking back the House and once we do, we’re going to be going after and taking down this corrupt communist-style government,” she added. “And we have got to do something to totally gut the Department of Justice and the FBI.”

Since leaving office, Trump has remained the country’s most divisive figure and a force in the Republican party, continuing to sow falsehoods that he actually won the 2020 vote.

On Wednesday, the 76-year-old Trump was questioned for four hours by Letitia James, the New York state attorney general who is investigating the business practices of the Trump Organization.

Trump is also facing legal scrutiny for his efforts to overturn the results of the 2020 election and over the January 6 attack on the US Capitol by his supporters.

Trump was impeached for a historic second time by the House after the Capitol riot — he was charged with inciting an insurrection — but was acquitted by the Senate.